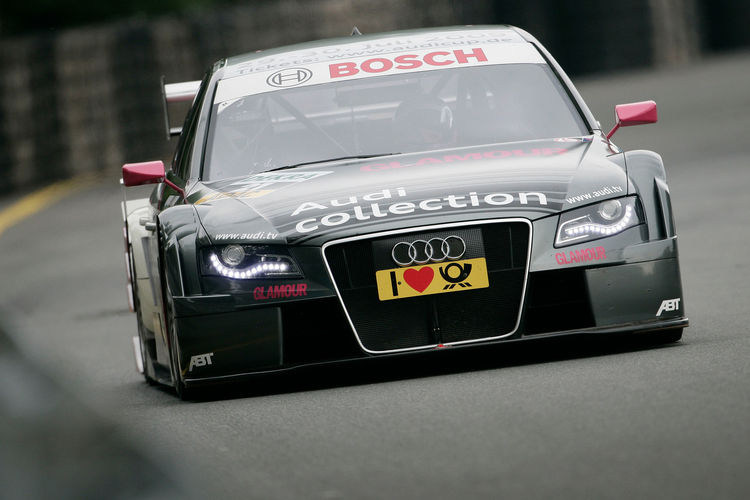 For the first time since 2002 (Mattias Ekström/Laurent Aiello) two Audi drivers will start from the front row at a DTM race at the Norisring. Timo Scheider secured the pole position with an advantage of 111 thousandths of a second ahead of his teammate Mattias Ekström. Quotes after a thrilling qualifying.

Dr. Wolfgang Ullrich (Head of Audi Motorsport)
“The teamwork of the whole squad today was perfect. Because today’s weather conditions changed so quickly that predictions were just about impossible, some of the decisions had to be based also on gut feelings and done very quickly. On top of that, we had a good car, that little bit of luck that’s needed and, with Timo (Scheider) and Mattias (Ekström), also had drivers who extracted the very best out of the A4. The grid positions on the front row are good base for the race but unfortunately no guarantee for victory. Tomorrow, we’ll have to get everything as perfectly down pat as today – and we’ll all work to make that happen.”

Timo Scheider (GW:plus/Top Service Audi A4 DTM #1), grid position 1
“A great day for Audi and, of course, particularly for Mattias (Ekström) and me. It was an extremely difficult qualifying as far as the right setup and the right timing were concerned. Audi did a fantastic job in that respect today and that was the key to success. I want to personally thank my race engineer for making the right decisions at the right moment although the conditions were really hard to judge.”

Mattias Ekström (Red Bull Audi A4 DTM #5), grid position 2
“That was an extremely exciting qualifying today. So, it’s even better if it was a thrill for the spectators and, in the end, you’re on the front row. A great success for Audi, particularly at the home round. The result also shows that the whole team did a fantastic job of testing and preparing our Audi A4 DTM for this highlight of the season. Now, I’m looking forward to the race – after all, we’ve got the best starting base for winning here in Nuremberg. I’ll give everything for that tomorrow.”

Katherine Legge (Audi Collection A4 DTM # 21), grid position 5
“That was tremendous! Everything went according to plan and the team did a good job. I feel that we really deserve this position. Qualifying 3 in particular was very interesting. Unfortunately, I had to go to the pits when the track was getting faster and faster but I had already completed the maximum permissible eight laps. The result is okay. Now, I’m looking forward to a good race.”

Tom Kristensen (100 Jahre Audi – A4 DTM #2), grid position 9
“I’m sad to only be ninth at the end of this very thrilling qualifying. The setup of our car was right because it was a compromise solution. Before the last lap I was running in fourth place and then was bumped to ninth. That’s very disappointing. But at the Norisring there’s still some potential even when starting from ninth place.”

Mike Rockenfeller (S line Audi A4 DTM #11), grid position 12
“I’m disappointed about twelfth place, no question about that. Conditions were difficult. In Qualifying 2 I was running pretty well in fifth, sixth and seventh places for a long. But when the flag was waved for me, a few others drove faster than I. Now I’ve got to try and make up ground again in the race.”

Martin Tomczyk (Red Bull Cola Audi A4 DTM #6), grid position 13
“Qualifying 1 in the rain was really a lot of fun. Driving on slicks right away in Qualifying 2 was the right decision. The final turn, which kept getting drier after the apex, was crucial. On my last flying lap I braked a little too late. I was running a bite wide and not able to improve my time. Too bad, because it would have been possible to move all the way up to the front.”

Alexandre Prémat (Audi Bank A4 DTM #14), grid position 14
“This qualifying was a disaster. In dry conditions things would have gone well for us. But this way it was very difficult to drive a clean line. On the first laps we fought for good positions but in the end I was no longer able to find any rhythm. Especially when braking, the car was difficult to drive and unstable. That’s why it was impossible to make it into Qualifying 3.”

Oliver Jarvis (Audi Cup A4 DTM #15), grid position 17
“A disaster! I’ve got no idea why we were so slow. In the end, we were short of a tenth to keep moving on. We would have had to be much faster.”

Markus Winkelhock (Playboy Audi A4 DTM #12), grid position 19
“I’m happy about first and second place for Audi. Unfortunately, my day was over as early as in free practice. I drove across a manhole cover that had been lifted by a preceding car at full speed. There was an awful impact and I didn’t know at first what was going on. I was lucky, though. But now my guys have to do a job within one day that normally takes four: to prepare the car all the way from scratch again. They’ll give everything so that I’ll be able to start to the race tomorrow.”

Hans-Jürgen Abt (Team Director Audi Sport Team Abt Sportsline)
“That was one of the most thrilling DTM qualifying sessions of all time. ‘Well done’ to the whole team. They got everything right today and clinched the 40th DTM pole position for our team. They made the best of the situation and made no mistakes. Congratulations also to Timo (Scheider) and ‘Eki’. We can always count on and be proud of them.”

Ernst Moser (Team Director Audi Sport Team Phoenix)
“We still need to analyze why Oliver (Jarvis) was out as early as after the first qualifying section and Alex (Prémat) after the second. That’s a very sobering exerience, especially considering the good job we did of setting up Alex’s car in free practice. This is a major disappointment for our team.”

Arno Zensen (Team Director Audi Sport Team Rosberg)
“That Markus (Winkelhock) wasn’t able to drive is pretty frustrating but everyone saw what happened to his car in free practice. I’d have never thought that something like this would happen to me a second time in my life. Back in 2004, in Shanghai, we had such an incident with a manhole cover. My expectations of ‘Rocky’ had been a bit higher. But in such conditions you also need a certain amount of luck. It wasn’t meant to be. Congratulations to Audi: The first row on the grid on the ‘Mercedes track’ at the Norisring is great of course.”