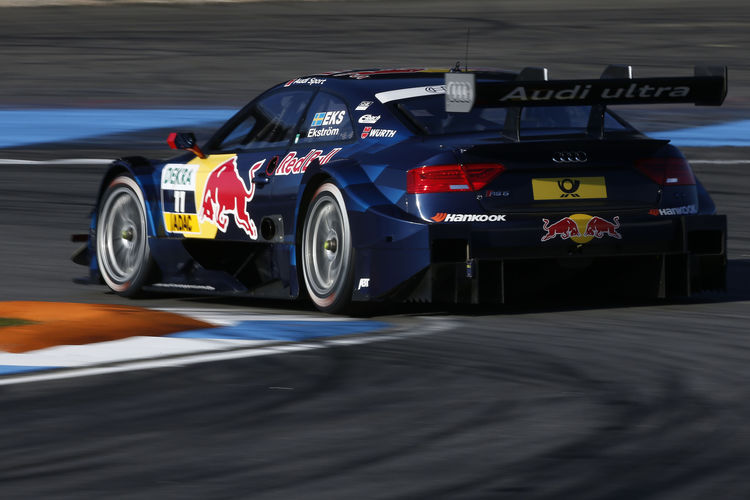 Five, seven, eight and nine: Four Audi RS 5 DTM cars are starting from the first five rows in the DTM finale at Hockenheim. Quotes after qualifying.

Dr. Wolfgang Ullrich (Head of Audi Motorsport): “Four cars on the first two rows of the grid: We’ve had that before in the DTM, too, and none of our cars at the very front in the end. So our aim remains unchanged: We want to close what has been a great DTM season for Audi with a good finale. The fact that ‘Rocky’ is already the Champion doesn’t change this in any way.”

Dieter Gass (Head of DTM): “That was a fair to middling qualifying for us. We’d been hoping for more. In the course of the qualifying session there were some indications that it wouldn’t be easy for us to battle for the pole position. There were some highlights here and there by our drivers but BMW was massively represented at the front all the time. Still, we’ve got four cars in the top ten. It’s unfortunate for Miguel (Molina) that it wasn’t enough for Q4 by such a narrow margin. He’s been subject to more or less public criticism in the past few days and now he’s delivered a very solid performance as the best Audi driver. The race is tomorrow and we’ve got to wait and see what the conditions will be like. On option tires, we’re always doing well and we’re going to attack again tomorrow.”

Miguel Molina (Audi RS 5 DTM), grid position 5
“A great moment for me! It’s nice to be the best Audi driver in the final qualifying session. I’m happy. Today, I squeezed the maximum out of the car and made no mistakes. Tomorrow, we’re going to battle for the manufacturers’ and the team Championship.”

Mattias Ekström (Red Bull Audi RS 5 DTM), grid position 7
“In Q2, I got everything right on the dot and managed to set the fastest time. In Q3 on the other hand, I didn’t catch the best lap of my life. In the end, it was enough for position seven. It’s important to be on the first grid positions because that way you’ve always got a chance to win the race.”

Adrien Tambay (Audi ultra RS 5 DTM), grid position 8
“It could have gone better but it could have gone worse as well. The BMW cars were very strong today. We’re hoping for a good race and I think we’re going to advance some more. My RS 5 fits my driving style; things were going really well in Q1 and Q2. We want to achieve a good result tomorrow.”

Mike Rockenfeller (Schaeffler Audi RS 5 DTM), grid position 9
“It was difficult right from the beginning. We were never among the front runners. Of course it’s a shame to be on position nine. We’d been hoping for more. But we know that you can’t be in front when things aren’t going perfect in the DTM. But we’re not giving up and will try and drive a good and clean race.”

Timo Scheider (AUTO TEST Audi RS 5 DTM), grid position 12
“I’ve got no answer as to why things weren’t going well. This morning in free practice, I had a pretty good balance on used tires but on the new ones I didn’t. It was similar in qualifying. I drove four clean laps without mistakes but in the end the time was simply too bad. That’s disappointing.”

Filipe Albuquerque (Audi Financial Services RS 5 DTM), grid position 14
“It was a tough qualifying session. It was difficult to understand when the tires worked best. I was battling the whole time but didn’t manage to make it into the third qualifying segment.”

Edoardo Mortara (Playboy Audi RS 5 DTM), grid position 18
“That was another difficult qualifying today. We were very quick in free practice in the morning. After that, I’d expected a better grid position. But we were too slow – I don’t know why yet.”

Jamie Green (Red Bull Audi RS 5 DTM), grid position 19
“A disappointing position. On my lap, I didn’t make any major mistake. It’s disappointing to be so far at the rear. We’ve got to analyze the data now to see why we were so far away from the front.”

Hans-Jürgen Abt (Team Director Audi Sport Team Abt Sportsline): “We can’t be one hundred percent happy about this qualifying session because BMW was very strong today. But we’ve got faith in our race speed and are hoping to be able to roll up the field from the rear tomorrow. If BMW should have some more problems with the tires after all, then we’ve got a chance of finishing on the podium.”

Ernst Moser (Team Director Audi Sport Team Phoenix): “It was great for Miguel (Molina), he almost made it into Q4 and he was the best Audi driver. His curve is pointing upward. Today, he proved again that he’s got what it takes. With ‘Rocky’  (Mike Rockenfeller) in ninth place both of our cars are within the top ten. This looks good for the team classification. It’s a good starting base for winning the team classification as well.”

Arno Zensen (Team Director Audi Sport Team Rosberg): “After free practice this morning, I was pretty optimistic. Both drivers were very happy with their cars. I don’t know what happened this afternoon. Unfortunately, it seems like the season will end exactly the way it started for us.”