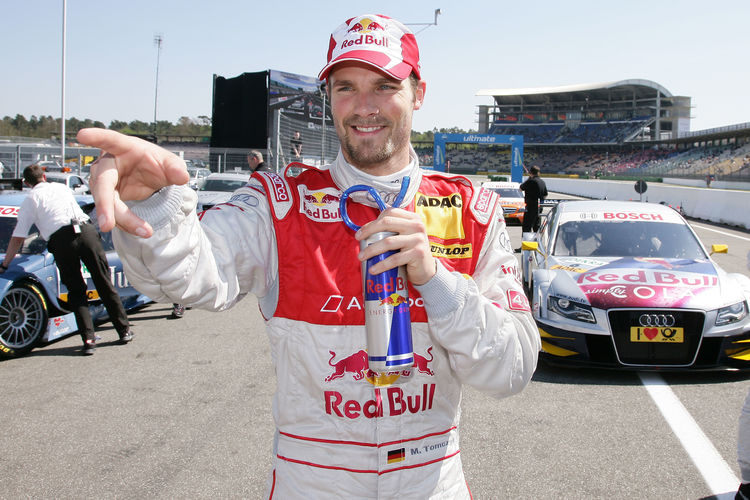 Martin Tomczyk will start from the front row at the 2010 DTM season opener at the Hockenheimring (Sunday, starting at 1:45 p.m. – local time – live on “Das Erste”). Quotes from the Audi camp after qualifying.

Dr. Wolfgang Ullrich (Head of Audi Motorsport)
“Last year we dominated qualifying for the season opener. But in such a highly competitive championship this should not be expected as the standard. I’m happy that Martin (Tomczyk) made it onto the front row. He’s been at the very front in all of the sessions this weekend. I know that he’s a racer. He’ll no doubt be able to achieve a good race result from this favorable grid position. It’s too bad that the other guys didn’t manage to make it into the fourth qualifying although they had the potential to do so. But the race is tomorrow. And then we’ll see how the weekend will end.”

Martin Tomczyk (Red Bull Cola Audi A4 DTM #6), grid position 2
“I prepared myself really well for the new season - I’m sure that will pay off. I’ve generally been very pleased here right from the beginning. The team and Audi did a great job of preparing my car; it war running really well here right from the first lap. Generally, we’ve still got a problem making optimum use of the new tire generation for a fast timed lap. Let’s see how that goes in the race. In Q4 I made a minor mistake. But, except for that, I’m very pleased.”

Mattias Ekström (Red Bull Audi A4 DTM #5), grid position 5
“Of course, fifth place isn’t first place. My car was very good after we’d been fighting to find a good set-up all day and kept changing this or that. Unfortunately, I made a mistake on the crucial lap before the hairpin. And that’s enough to keep you from clinching pole. But from position five, anything’s possible. I’ll be fighting for a podium position.”

Oliver Jarvis (Tabac Original Audi A4 DTM #2), grid position 7
“Qualifying one was okay. We had decided to just use one set of tires. In the end, I was a bit fortunate to make it. The second qualifying started with a very fast lap on the first set of tires. On the second one I didn’t improve any more. Unfortunately, I made a mistake in the third qualifying on new tires. I was struggling a bit. Grip wasn’t optimal. But I probably wouldn’t have made it into Q4 anyway. That’s a little disappointing. I’d been hoping for more.”

Mike Rockenfeller (S line Audi A4 DTM), grid position 8
“The car was great to drive. The track changed a little since this morning. We made another minor change between the first and second qualifying sessions. This improved my Audi A4 DTM yet again. I was first and drove the fastest time of the whole qualifying. In Q3 there was so much dirt on the track in the second turn; that’s why that was a poor lap. I drove another lap but made a mistake in turn one. In any event, a better place than eighth would have been possible. Still, I’m pleased, the car is good. I look forward to the race.”

Timo Scheider (GW:plus/Top Service Audi A4 DTM), grid position 9
“Of course I’m disappointed. Qualifying reflected a problem that’s been pursuing us throughout the weekend: the front tires aren’t working as well as we’d like - especially on the first lap on new tires. We’ve got to find out what my team colleagues did better.”

Alexandre Prémat (TV Movie Audi A4 DTM), grid position 11
“That wasn’t so bad for starters. But we could have clearly been better. On my last outing I made a small mistake in the Sachs corner. One of the front wheels locked. I was just lacking two or three tenths to make it into the third qualifying. The car basically felt very well balanced, so we’ll be able to achieve a good race result with it.”

Markus Winkelhock (Playboy/GW:plus Audi A4 DTM), grid position 12
“Qualifying didn’t go the way I’d expected it would. As early as in free practice we had problems with understeer. That happened again in qualifying. Balance was simply not perfect. I felt that particularly in Q2. That’s why I was having difficulties on the last set of tires. Consequently, twelfth place was all that was possible this way.”

Miguel Molina (Audi Bank A4 DTM), grid position 13
“Everything was new for me. In my first qualifying I had to first get used to the whole process. I tried my best. 14th place is pretty good for starters. But I know that I’ve got to improve. The race will give me the next opportunity to do so.”

Katherine Legge (Glamour Audi A4 DTM), grid position 18
“I’m happy after all, because in the two free practice sessions we were still struggling with minor problems and we didn’t have them any more now. The car was running really well. Unfortunately, I lost a lot of practice time. I’m hoping to clock a lot mileage in the warm-up session and then my times should be improving a bit too. The others had three hours of driving time in the practice sessions, so I’m at a bit of disadvantage in that respect. But I’m looking forward to the race with a positive outlook.”

Hans-Jürgen Abt (Team Director Audi Sport Team Abt Sportsline)
“We knew that the situation would be extremely tight and difficult. You could see that the drivers had to push themselves to the limit. Even the slightest mistake was punished. We made slight mistakes today and now we’ve got to make the best of the situation. ‘Well done’ to Martin (Tomczyk). He showed that the car’s got what it takes. That was really important and it’s all the motivation for the race. Our aim: we want our drivers to move farther to the front.”

Ernst Moser (Team Director Audi Sport Team Phoenix)
“As expected, it was very tight today. That meant you really had to achieve three perfect sector times on each lap. ‘Rocky’ did a very good job of this once. In the second qualifying he was even first. Unfortunately, Alex (Prémat) was standing sideways in the Sachs corner. Otherwise, he’d have made it into Q3 too. ‘Rocky’ then got hit in the third qualifying. Somebody had gotten off the track and kicked up some dirt onto the tarmac. On the following second lap he didn’t handle the first turn perfectly. That’s too bad. Today we had the chance to make it into Q4. That’s why the result is even more frustrating. But the race is long.”

Arno Zensen (Team Director Audi Sport Team Rosberg)
“Katherine (Legge) lost a lot of time in both free practice sessions. She hardly had the chance to really set up her car. That’s why the result is not surprising. But I’m not really happy with Markus’ (Winkelhock) result. Looking at ‘Rocky’s’ showing in the second qualifying, a lot more would probably have been possible. In the warm-up on Sunday we’ll have to drive a considerable distance in one stretch. Maybe then we’ll have some chances in the race.”