Skip to content
We are using cookies for a better user experience.
07/27/19
Neuburg a. d. Donau
Sports

Prominent appearance of the Audi R8 LMS GT2 at Spa 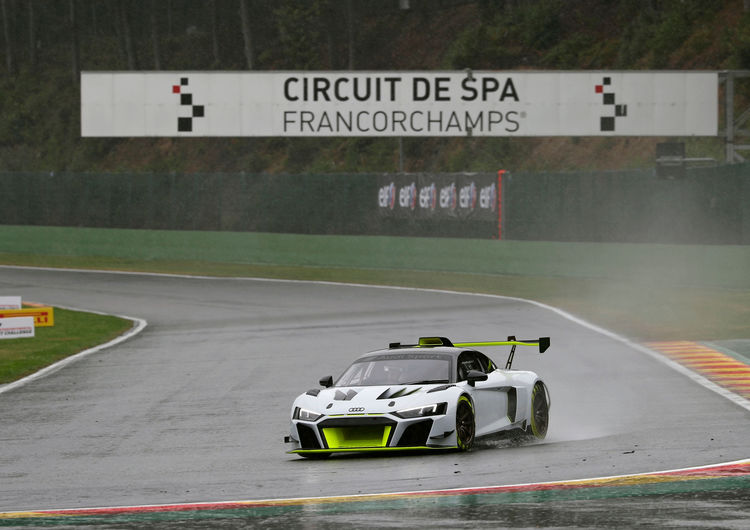 Just three weeks following its world premiere at the Goodwood Festival of Speed in the United Kingdom, the new Audi R8 LMS GT2 attracted attention at the world’s biggest GT race in Belgium. With 72 entrants, the 24 Hours of Spa is unique and regarded as the highlight of the Blancpain GT Series Endurance Cup in Europe as well as the worldwide Intercontinental GT Challenge.

As early as on the day of the parade on Wednesday before the race, the audience marveled at the latest model from Audi Sport customer racing. Audi Sport driver Markus Winkelhock drove the 640-hp sports car from the race track at Francorchamps to the town center of Spa located nine kilometers away from the circuit. Subsequently being showcased in the middle of the paddock, the Audi R8 LMS GT2 attracted the crowd’s attention throughout the weekend. Before the field embarked on its 24-hour journey on Saturday, it followed the sports car painted in Suzuka Gray as the lead car into the warm-up lap. The Audi R8 LMS GT2 fascinates as the most powerful model in the brand’s customer racing program with awesome power output, is equipped with state-of-the-art safety technology and will be delivered starting in December.

“Following its much-noticed debut at Goodwood, Spa was the perfect second appearance for the Audi R8 LMS GT2 in front of many fans and numerous potential customers,” said Chris Reinke, Head of Audi Sport customer racing. “Other appearances at major public events in and outside of Europe such as at Concours d’Elegance in Pebble Beach are already being planned.” Starting next year, the new GT2 category will open up an attractive new field of activity exclusively for gentleman drivers. Stéphane Ratel Organisation (SRO) as the organizer already announced the future calendars for three continents on the race weekend at Spa. The GT Sports Club Europe for GT2 models will be racing in five European countries in 2020 while the GT2 Sports Club America in the United States encompasses five events as well. The GT2 Sports Club Asia completes the global platform with three events to be held in Malaysia, Japan and China. In addition to these three central fielding opportunities, Track Days and the increasingly popular events at Race Resorts provide other attractive stages for the new GT2 sports cars. Audi is among the pioneers in this category. In 2020, SRO expects up to six manufacturers to compete in the GT2 class with their high-performance sports cars.