​Positions three and four for Audi at Le Mans 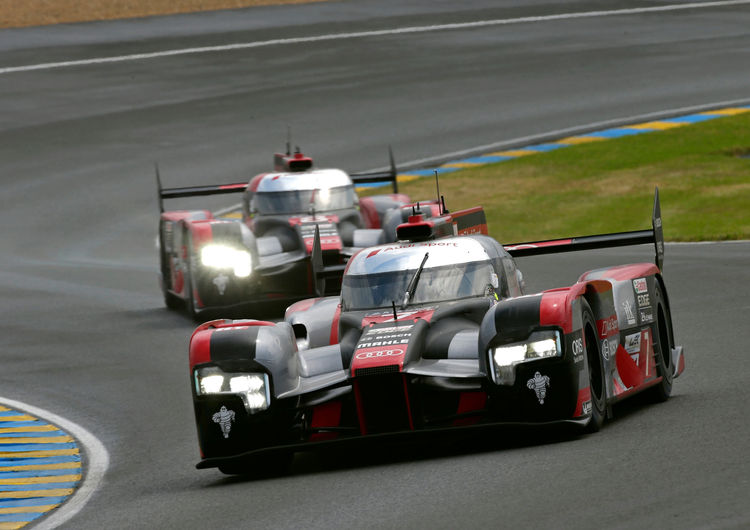 Audi took positions three and four in the 24-hour race at Le Mans in front of 263,500 spectators, continuing its string of podium finishes in the iconic French endurance race.

In a dramatic race that was only decided on the last lap, Lucas di Grassi (BR), Loïc Duval (F) and Oliver Jarvis (GB) clinched third place for Audi at the last moment. Marcel Fässler (CH), André Lotterer (D) and Benoît Tréluyer (F) finished in position four. With that, Audi, in its 18th participation since the brand’s Le Mans debut in 1999, achieved its 18th podium in succession including 13 overall victories.

“Unfortunately, neither of our two cars made it over the distance without issues,” said Head of Audi Motorsport Dr. Wolfgang Ullrich. “This weekend once more showed why Le Mans is regarded as the world’s toughest endurance race. I’m proud of our squad having managed to bring both cars home. But, obviously, this is not the result we were hoping for. Congratulations to Porsche on their second victory in succession. Following a tremendous race, Toyota, on making their 18th attempt, again just barely missed finally winning Le Mans – that speaks volumes about how incredibly difficult this race is.”

Due to heavy rainfalls, the field started behind the safety car for the first time in Le Mans history. Following the all-clear for the race, it took André Lotterer only a few laps to advance from grid position five to first place. However, the #7 Audi R18 lost its chance for victory as early as in the second hour when Lotterer, while leading the race, had to pit for a change of the turbocharger.

From this point on, Audi Sport Team Joest’s hopes were pinned on the #8 Audi R18 which, in spite of various incidents, kept pace with the group of the front runners throughout the night and, on Sunday morning, trailed the subsequent winners with a gap of less than two laps. A defective brake disc caused the deficit to increase to twelve laps four hours before the end of the race. As a precaution, the front brake discs were subsequently changed on the #7 “sister” car

Consequently, Audi still achieved its aim in bringing both new cars home and to score valuable points for the FIA World Endurance Championship (WEC) that will continue with the 6-hour race at the Nürburgring in Germany on July 24.