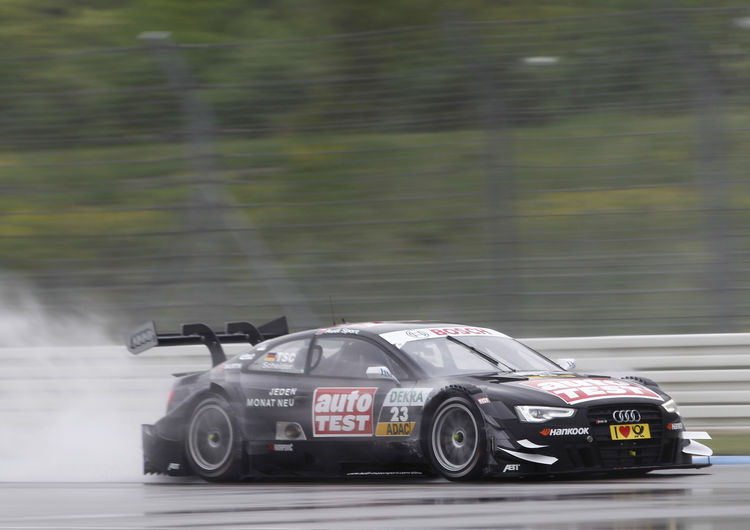 Audi is tackling the new DTM season at the Hockenheimring (Sunday from 13:15 live on “Das Erste”) from position one on the grid. In the first qualifying session of the year, Timo Scheider in the AUTO TEST Audi RS 5 DTM of Audi Sport Team Abt Sportsline secured the pole position in extremely difficult track conditions.

Pouring rain in the morning, a track that became increasingly drier in the afternoon: In the battle for the best grid positions, the teams were confronted with continually changing conditions in the DTM opening round at Hockenheim – a case right up the alley of the most successful Audi DTM team and the two-time DTM Champion. In the third qualifying section (Q3), Timo Scheider switched from rain tires to un-treaded rubber at the right moment and on the crucial lap in Q4 was a tenth of a second quicker than BMW driver Augusto Farfus.

“Today you had to make the right decisions, and that’s what we did,” said an overjoyed Timo Scheider after posting his eleventh fasted qualifying time in total in the DTM. “Tomorrow, it’ll be about carefully handling the tires and making the best of this pole position. In any event, starting from the very front with the RS 5 DTM at the DTM season opener at Hockenheim is fantastic – particularly since, before the qualifying session, we really didn’t know where we stood after it was raining in free practice.”

Scheider’s team-mate Mattias Ekström, in fifth place in the Red Bull Audi RS 5 DTM, barely missed the shoot-out of the top four. But the Swede showed a strong performance in each of the first three qualifying segments and with his place on the third row of the grid also has a good starting base for the race on Sunday, in which option tires and an adjustable rear wing (DRS) will be used for the first time in the DTM. Furthermore, changes to the set-up of the cars after qualifying are no longer permitted.

The other Audi drivers were less fortunate. Newcomer Jamie Green in his Red Bull Audi RS 5 DTM was one of the quickest on a wet track but at the crucial moment had to settle for twelfth place. Adrien Tambay whose Audi ultra RS 5 DTM is starting from the Hockenheim grid featuring the colors of the new “Iron Man 3” movie and Mike Rockenfeller in the Schaeffler Audi RS 5 DTM of Audi Sport Team Phoenix will be sharing the seventh row.

Filipe Albuquerque in the Audi Financial Services RS 5 DTM of Audi Sport Team Rosberg made it into Q2, but in the second segment complained about oversteer and will start from position 16 on Sunday. Miguel Molina (Audi RS 5 DTM) and Edoardo Mortara (Playboy Audi RS 5 DTM) were eliminated in Q1 in 18th and 19th place.

Dieter Gass, Head of DTM at Audi Sport: “Well done to Timo Scheider, his engineer and Audi Sport Team Abt Sportsline: They did everything right today in these extremely difficult conditions and deserve clinching the pole position. But I think that qualifying was just a foretaste of the race tomorrow, which not least due to the conditions today will be a journey into the unknown. Of course it’s our aim to make it into the top ten with more than two cars.”

For the race, sunshine has been predicted. ARD will start airing live coverage from Hockenheim on “Das Erste” on Sunday at 13:15. The new DTM format no longer provides for a warm-up session. Instead, the fans on location will experience a pit stop practice of the DTM teams for the first time as part of the “Pit Walk” starting at 8:55.