Podium for Audi at DTM’s return to Zolder 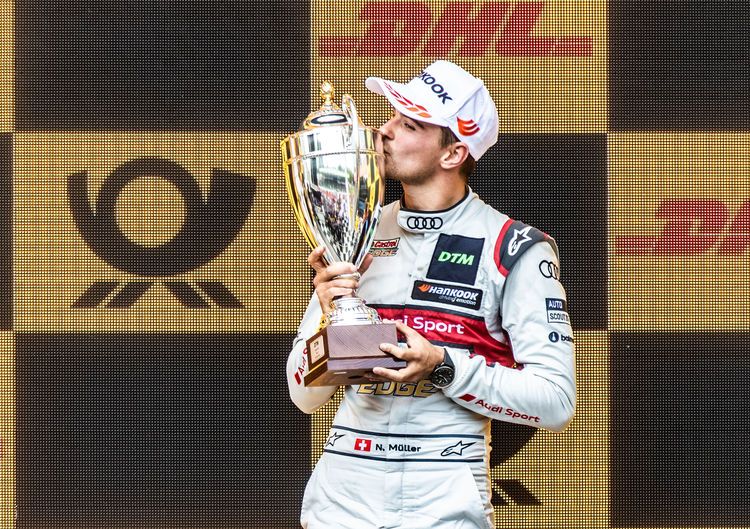 The safety car deprived those drivers of all chances who had not yet made their mandatory pit stops at the time it was deployed. They also included René Rast and Robin Frijns, the two-best placed Audi drivers up until that time. Both went home empty-handed.

Nico Müller on the other hand stopped for fresh tires at exactly the right moment. Then, in the final stage, the Swiss from Audi Sport Team Abt Sportsline fought a gripping duel with BMW driver Joel Eriksson. Müller crossed the finish line in third position, just 184 thousandths of a second behind the Swede.

“It was a good battle with Eriksson,” said Müller. “I tried everything to get past him. But he put up a really clever defense and overtaking is very difficult on this track anyhow. I’m happy about the podium and the points – especially after my compromised qualifying.”

Loïc Duval and Mike Rockenfeller from Audi Sport Team Phoenix shone with strong fightbacks. Duval battled his way forward from 14th on the grid to fourth position. Rockenfeller had to enter the race from the last spot on the grid due to a clutch repair. With a two-stop strategy, the Audi driver still finished fifth – a nice reward for his mechanics, who had worked on his Audi RS 5 DTM up until the early morning hours.

By contrast, Jamie Green’s sixth place was only a small consolation for Audi Sport Team Rosberg after René Rast had missed pole position in qualifying by only 42 thousandths of a second. The 2017 DTM Champion was running in third place right behind the two leading BMW when the safety car was deployed. Rast had to make his mandatory pit stop after the restart and so dropped out of the points. Due to a technical issue, he ultimately parked his Audi RS 5 DTM early.

“It was a difficult race, due to the safety car, among other things,” said Head of Audi Motorsport Dieter Gass. “In addition, the fact that overtaking opportunities here at Zolder are very rare made the race even more difficult for us after an average qualifying performance. There were some situations in which we were potentially faster than our rivals but simply weren’t able to overtake. Today, we have to live with positions three, four, five and six, and come back stronger tomorrow.”

Before Sunday’s race (starting at 1 PM CEST live on SAT.1 in Germany), Audi continues to lead the manufacturers’ classification in the DTM. Audi Sport Team Abt Sportsline defended the lead of the teams’ classification on Saturday. In the drivers’ classification, Nico Müller as the best-placed Audi driver ranks in third place, separated from leader of the standings Marco Wittmann by only six points.