Skip to content
We are using cookies for a better user experience.
09/03/18
Neuburg a. d. Donau/Nürburg
Sports 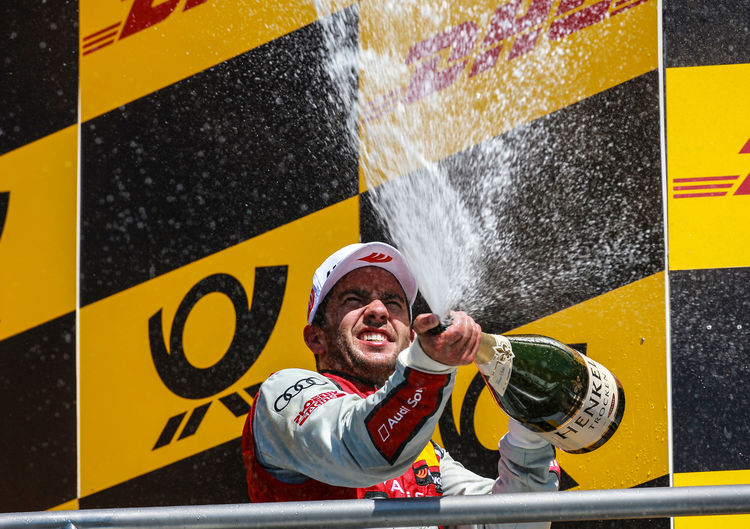 Following three spectacular international events, the DTM is returning to Germany this weekend. From September 7 to 9, the touring cars with more than 500 horsepower will compete at the Nürburgring in the Eifel. For Audi driver Mike Rockenfeller who hails from Neuwied, this will be a very special home round as the 2013 DTM Champion is tackling his 150th DTM race with Audi on Saturday.

“Rocky” has been racing in the popular touring car series for the four rings since 2007. “Twelve years are a long time,” he says. “They included many cool races and I hope that there’ll be many more. The DTM is extremely rough and exactly that makes it a lot of fun. I’m already looking forward to the new, even more powerful four-cylinder turbo engines that will be used starting in 2019.” Rockenfeller has been deprived of a victory in his DTM home race to date. “Obviously, my jubilee would be a perfect occasion,” he says. “The most recent races have shown that nothing’s impossible in the DTM.”

“Rocky” last mounted the podium in second place in the season opener at Hockenheim. His best result at the Nürburgring to date has been a second place as well. For Rockenfeller’s team, the Nürburgring is a round on home soil too. Audi Sport Team Phoenix is based only a few hundred meters away from the paddock in the industrial park in Meuspath. Ernst Moser’s squad that provided the champion for Audi in 2011 and 2013 has never won a DTM race at the Nürburgring either.

Last year, in addition to the changeable Eifel weather, the unpopular performance weights thwarted Audi’s plans. They were abolished immediately after the race at the Nürburgring. “I’m still convinced that this was the right step,” says Head of Audi Motorsport Dieter Gass. “We’re seeing pure racing in the DTM.” At Misano, Audi most recently did well in extremely difficult conditions. “This shows the quality of the entire squad,” says Gass. “And at the Nürburgring, anything’s possible in terms of the weather too.”

In the Eifel, the DTM races on the sprint circuit with a length of only 3.629 kilometers. “Actually, I’d love to drive the full track including the Nordschleife,” says Mike Rockenfeller. “But the short configuration is a lot of fun too and technically very challenging. There are two long straights where you have good overtaking opportunities thanks to DRS.”

As the Audi driver with the best points score, René Rast from Audi Sport Team Rosberg is traveling to the Eifel. Following a difficult start to the season, the title defender in the most recent five races mounted the podium on three occasions. Remarkable as well is Robin Frijns maiden season: The Dutchman from Audi Sport Team Abt Sportsline is the second-best Audi driver in the standings. As he lives only about 170 kilometers away in Maastricht, the Nürburgring is almost like a second home round for Frijns.

The fans are able to look forward not only to two action-packed DTM races. On Saturday night, the racing series and the “Olé Party” are inviting all spectators to a “DTM After-Race Party.” Germany’s biggest open-air party will feature many stars from the German pop music scene: Mickie Krause, Michelle, Mia Julia, Michael Wendler, Maite Kelly and Oli. P. A concert by “Mia Julia & Friends” on Friday night is included in the weekend ticket as well.

Tickets for the DTM weekend are available online at www.audi.com/dtm. SAT.1 will air live coverage of the two DTM races on Saturday (September 8) and Sunday (September 9) starting at 1 PM (CEST).