Skip to content
We are using cookies for a better user experience.
08/10/20
Neuburg a. d. Donau
Motorsport 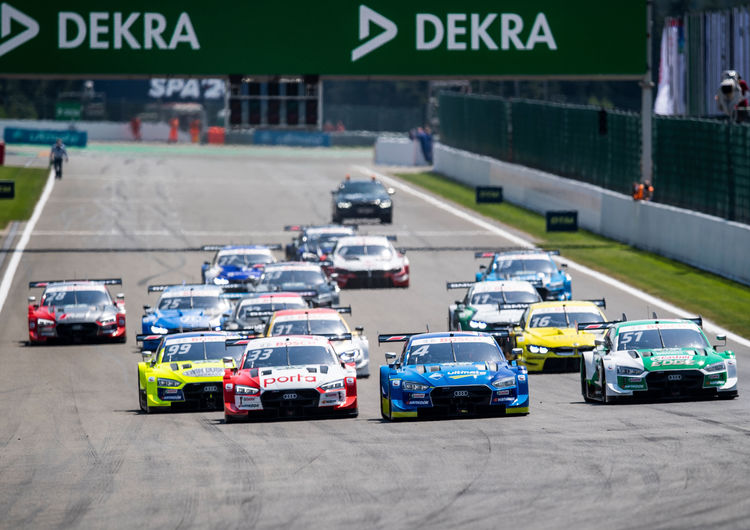 Since August 11, 2019, Audi has been unbeaten in the DTM. After the impressive performance of the Audi RS 5 DTM at the season opener at Spa, the touring car racing series continues with four races at the Lausitzring, where Audi has already won nine times in the DTM and celebrated a very special triumph last year.

In 2019, the 500th race in DTM history took place at the Lausitzring and Audi secured the manufacturers’ title with a 1-2-3-4-5 victory on Sunday, winning the title with four races left before the end of the season, while at the same time, all eight Audi RS 5 DTM cars finished among the top nine. There’s hardly a more impressive way to showcase “Vorsprung”.

“The Lausitzring is a track on which we’ve always done pretty well in the past,” says Head of Audi Motorsport Dieter Gass. “I assume the gaps will not be as big as at Spa and that we will face more competition. But, I think that with our current package we’re well sorted out everywhere.” This is underlined by nine pole positions and nine consecutive victories (across two seasons) for the Audi RS 5 DTM, both of which are new DTM records.

The Lausitzring has been part of the racing series since its opening in 2000 and has been the venue for many exciting and, sometimes, curious DTM races.

At the first Lausitzring race after its return to the DTM on a factory level, Audi celebrated a victory with the A4 DTM in 2004. Mattias Ekström, however, was only declared the winner after Gary Paffett had been excluded from the results due to an insufficient amount of fuel remaining in the tank of his Mercedes-Benz.

One year later, Ekström and Paffett were the main protagonist in one of the most exciting duels in DTM history. The two drivers raced bumper to bumper for practically the entire race. Although Paffett was faster, the Briton did not manage to pass Ekström, overtaking aids like Push-to-Pass or DRS did not exist in the DTM at that time.

In 2006, there was another “petrol crisis” – this time for Mattias Ekström. The Swede fought for victory when he stopped two laps before the end of the race. A problem with the fuel can during the second pit stop meant that Ekström did not have enough fuel for the final phase in ordrer to finish the race. Later, refueling was banned in the DTM for safety reasons, because dangerous incidents occurred again and again.

In 2007, the spectators at the Lausitzring experienced total confusion when the safety car did not enter the track in front of the leader, but instead drove right into the middle of the field. In addition, the traffic lights at the pit exit did not work, which meant that several drivers won a lap. Nevertheless, the race counted for the championship.

In 2010, Audi lost its best-placed cars in the championship on the opening lap due to a collision involving Audi drivers. This “nightmare” also meant that Audi had to wait six years for the next victory in the Lausitz after 2005, despite numerous podium results. It was Martin Tomczyk who took the next win for Audi in the 2011 season, an important step towards the German’s subsequent title win with a two-year-old Audi A4 DTM.

In 2015, Audi achieved a similarly dominant weekend at the Lausitz as it did most recently at Spa: 1-2-3-4 victory on Saturday, a top five sweep on Sunday. The main star was Jamie Green, who won both races. His triumph in Saturday’s race was particularly impressive: The Briton was in poor health and could hardly speak, making radio communication with his team difficult. In addition, the Drag Reduction System (DRS) on his car did not work. In 2017, Green won a third race at the Lausitzring, making him the most successful of all active DTM drivers on the East German circuit.

His teammate René Rast clinched his first DTM podium at the Lausitzring in 2017, in only his sixth DTM race. One year later, he emerged uninjured after a spectacular rollover in his Audi RS 5 DTM. “The accident looked worse from the outside than what I had experienced inside the car,” he says. “But, the fact that I wasn’t able to start the second race on Sunday may have cost me the title in 2018. After all, I was only four points short at the end of the season.” Without the involuntary somersault in the Lausitz, Rast would probably be a three-time DTM champion today.

In 2019, the German, while leading, retired from the first race at the Lausitzring due to a technical issue. 24 hours later, he took a dominant win. The defending champion appreciates the positive sides of the Lausitzring: “The track offers everything a driver needs: slow corners, fast corners and a long straight, where you can overtake well with DRS and Push-to-Pass. That’s why you usually see very good races at the Lausitzring.”

The DTM is visiting the Lausitzring for two weekends in a row. On August 15 and 16, the 3.478-kilometer short sprint circuit will be used. Lap times on the 4.570-kilometer circuit, which will be used on August 22 and 23, are about 20 seconds slower. “We last raced on the short version back in 2017,” says Lausitzring expert Jamie Green. “It doesn’t offer as many overtaking opportunities as the longer version, which we’ll be using a week later. So, the two qualifying sessions are even more important in order to back up your chances in the races with good grid positions.”

All four races will be broadcast live on SAT.1 in Germany at the usual time of 1 PM CEST. Extensive coverage is also provided by the DTM’s new OTT platform at grid.dtm.com. Audi driver Nico Müller travels to the Lausitz, where he won Saturday’s race in 2019, as the leader of the drivers’ standings.