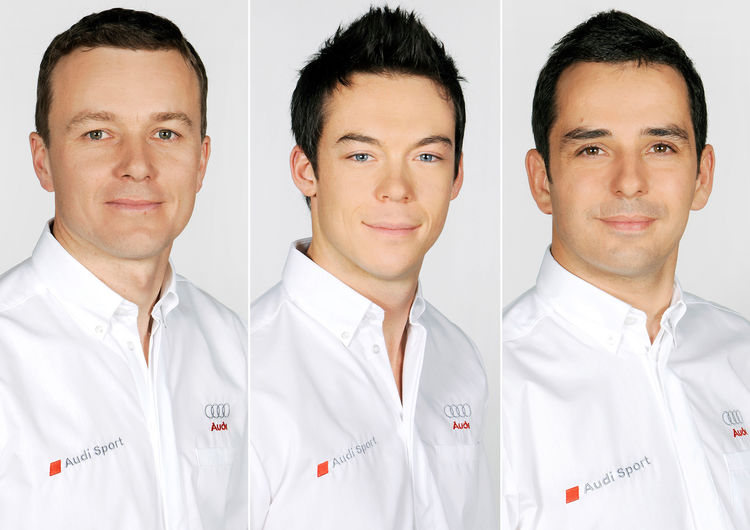 Audi Sport leaves nothing to chance in its endeavor to bring the prestigious Le Mans trophy back to Ingolstadt and Neckarsulm. Not only the technology of the Audi R15 TDI is being subjected to further development. The drivers’ line-up for the 24 Hours of Le Mans (France) has been extended as well.

For the world’s most famous endurance race, Audi has signed three new drivers, the Swiss Marcel Fässler (33), German André Lotterer (28) and Frenchman Benoît Treluyer (33), who will be sharing the cockpit of one of three Audi R15 TDI cars on June 12/13, 2010.

“In view of our strong competitors, we want to – and have to – be perfectly positioned in terms of drivers too,” explained Head of Audi Motorsport Dr. Wolfgang Ullrich. “Therefore, we decided to extend our driver line-up. Marcel, Andre and Benoît attracted our attention during the past two years in a particularly positive way. They are used to handling fast prototypes and know each other extremely well. The three of them, and we too, are convinced that they are a very good combination for Le Mans.”

The new Audi drivers already have experience at the wheel of diesel racing sports cars. Marcel Fässler successfully contested two races in the American Le Mans Series for Audi in 2008. André Lotterer impressed at Le Mans last year at the wheel of an Audi R10 TDI of the private Audi customer team Kolles. Benoît Treluyer competed in the 24-hour classic in a Peugeot in 2009.

Marcel Fässler, André Lotterer and Benoît Treluyer have already visited Audi Sport in Ingolstadt for seat-fittings and will soon be testing the Audi R15 TDI. The first racing commitment for the new Audi driver trio is planned for May 9, in the 1000-kilometer race at Spa-Francorchamps (Belgium), which will serve as a dress rehearsal for the 24 Hours of Le Mans for Audi Sport Team Joest.

“For the time being, plans for Marcel, Andre and Benoît are fully focused on Le Mans 2010,” says Dr. Wolfgang Ullrich. “But all three of them are still relatively young, and therefore, may also become part of our sports car project over the long term.”

Audi has been contesting the 24 Hours of Le Mans since 1999 and having made 11 starts, has won the race as many as eight times. In addition to speed, reliability and efficiency are the key factors of success in the world’s most famous endurance race.

Furthermore, the LMP1 class is unrivaled by any other motorsport category in terms of offering the opportunity to test technical innovations in racing conditions. Thanks to its technology leadership, Audi has repeatedly set milestones in this regard. The Audi R8, for instance, successfully introduced TFSI gasoline direct injection technology in 2001, while in 2006 the Audi R10 TDI was the first diesel-powered vehicle to clinch victory in the history of the race.

Quotes by the new Audi drivers
Marcel Fässler: “For me, Audi is the most successful brand at Le Mans. Having the chance to be part of the Audi team this year is incredible for me and a great opportunity I want to take advantage of at all cost. I’m tremendously looking forward to the new challenge with Audi and expect the R15 TDI to be competing for overall victory. We’ll see which Audi team will be the most fortunate one in the end. The main thing is that victory will go to Ingolstadt and Neckarsulm again.”

André Lotterer: “I’m proud about having been selected by such a successful team as Audi Sport. This is a major step in my career. I’ll give my best for Audi to recapture the Le Mans trophy. Last year, as a Le Mans rookie, I learned a lot in the R10 TDI of the Kolles team – particularly because my team-mate and I had to contest the race as a team of two. Now I’ve got the chance to compete for a top-class team. Consequently, I’ve just got a single goal: victory!”

Benoît Treluyer: “For me, a dream is coming true. I’d never have expected to immediately get a slot with a ‘factory’ team for Le Mans after my return from Japan – and, what’s more, together with my best friend André Lotterer, and with Marcel Fässler with whom I started my career in  Formula Campus. That really can’t be topped! We’ve got a car in which we can clinch overall victory. Before signing the agreement with Audi I watched the team while it was testing. The way they work and the attitude at Audi are exactly what I was looking for.”

A brief overview of the three new Audi drivers