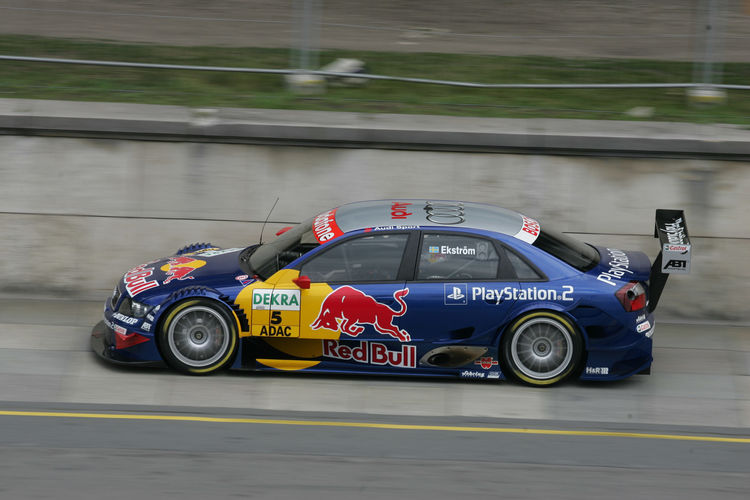 The leader of the drivers’ standings, Mattias Ekstöm, in the Audi A4 DTM fielded by Audi Sport Team Abt Sportsline, was yet again the quickest Audi driver in Friday’s tests at the Norisring. The German drivers Christian Abt and Frank Biela were two other Audi contenders who made it into the top ten. Friday’s tests showed that the city circuit in Nuremberg with a length of merely 2.3 kilometres is another venue to see an extremely tight DTM fight: 19 cars, and thus nearly the entire starting grid, ended up within a single second of each other. On Friday, the Audi drivers primarily focused on finding the best possible compromise between drag coefficient and downforce, testing different aerodynamic variants and setups. The qualifying session, which determines grid positions, is scheduled to start at 1 p.m. local time on Saturday.

Mattias Ekström (Audi Sport Team Abt / Audi A4 DTM #5)
9th / 6th place, 40.208s (101 laps)
“We’ve made quite a bit of progress today. But if we want to win on Sunday, we’ve got several more improvements to make. The funny thing is: when you’re in the car, everything feels a lot quicker than it shows on the time monitor. That makes the setup work particularly difficult.”

Christian Abt (Audi Sport Team Abt Sportsline / Audi A4 DTM #11)
4th / 9th place, 49.331s (75 laps)
“On the whole, I’m satisfied with the way Friday went. We’ve tried a lot of different things and primarily worked on finding the best possible mix between a good top speed on the straight and enough downforce for cornering. We’re headed in the right direction.”

Frank Biela (Audi Sport Infineon Team Joest / Audi A4 DTM #45)
21st / 10th place, 49.341s (105 laps)
“I think the work we did today went into the right direction. The car was feeling very good in the end. With the brakes in particular we’ve made great strides, and we’ve got a few more ideas for tomorrow. Generally speaking, I’m happy to be driving at the Norisring again – this circuit has always been something special.”

Martin Tomczyk (Audi Sport Team Abt / Audi A4 DTM #6)
16th / 17th place, 49.518s (87 laps)
“The Norisring simply isn’t my favourite track. But that inspires me all the more to continue fighting and to – finally – make my way to the front of the field here. Accelerating out of the hairpin still makes me lose the biggest chunk of time – but I’ll get a handle on that.”

Tom Kristensen (Audi Sport Team Abt Sportsline / Audi A4 DTM #12)
6th / 8th place, 49.531s (101 laps)
“I’ve come to the Norisring straight from Le Mans – in other words from the longest to the shortest race track of the year. The circuit is easy to learn, but it’s difficult to maintain a consistently high speed. The constant changes between accelerating and braking are still making it somewhat difficult for me to exploit the potential of my A4. Nevertheless, I’m hoping to clinch a good grid position tomorrow for the large crowd of Audi fans.”

Emanuele Pirro (Audi Sport Infineon Team Joest / Audi A4 DTM #44)
19th / 20th place, 50.054s (99 laps)
“We started from a good basis here but then our work went into the wrong direction completely. I tried everything, but simply nothing came out of it. We’ve still got a lot a work to do until tomorrow.”

Hans-Jürgen Abt (Team Director Audi Sport Team Abt Sportsline): “The result is typical for the Norisring because, once again, we were all fighting for hundredths of a second. But my whole team went about working their way down the task list in a very professional and calm manner and sorted out all the issues. So, we’re well set for the free practice session and the subsequent qualifying. And we’re sure that our many fans in the grandstands will help us take our A4 cars to the front of the field.”

Ralf Jüttner (Technical Director Audi Sport Infineon Team Joest): “Frank has shown that it’s possible to get into the top ten – but the field is incredibly tight. With Frank, our work went into the right direction, his A4 was very good in the end. On Emanuele’s car, we made change between the two tests that, unfortunately, didn’t work out at all. We’ll reverse this by tomorrow and try to get Emanuele, as well, to where Frank’s been today – the top ten.”

Dr Wolfgang Ullrich (Head of Audi Motorsport): “We knew that things would be very tight and difficult. With regard to the standings, it’s good of course that Mattias is yet again the quickest Audi driver. Altogether, though, we’re not yet satisfied with the result. Now, we’re going to gather all the data and draw the right conclusions from it. Due to the small differences in the times clocked by the contenders, it’s particularly important here to be sorted out perfectly.”