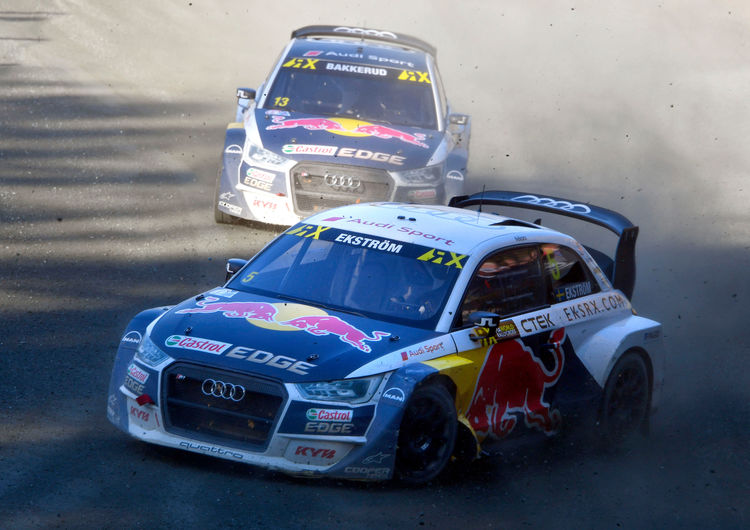 In the FIA World Rallycross (World RX) season’s penultimate round at the Estering near Buxtehude, Mattias Ekström and Andreas Bakkerud in positions two and three celebrated the first two podium finishes in a single event for EKS Audi Sport in the 2018 season. In summer-like temperatures, Ekström in the Audi S1 EKS RX quattro only had to admit defeat to World Champion Johan Kristoffersson by 1.849 seconds.

In the preliminary heats, the two EKS Audi Sport drivers had previously created a good base for the final races: On Sunday, Mattias Ekström won the third qualifying session and placed fourth in the intermediate classification while Andreas Bakkerud with consistent performances was in second position. As a result, Bakkerud and Ekström started to the semi-finals from the front row. In the turbulent action on the merely 925 meters long tradition-steeped track south of Hamburg, both showed strong starts, maintained the lead and celebrated a one-two result.

In the final, Andreas Bakkerud and Mattias Ekström were in positions two and four when the race was stopped due to an accident. Following the restart, Mattias Ekström clinched second place ahead of Bakkerud.

“We’re happy about having finished on podium with both Audi cars,” said driver and team owner Mattias Ekström. “We’d been hoping for victory and came very close, but not close enough. The competition was very strong once again. However, there’s one more race to go. We’re continuing to work hard and fight. I believe in this team and we’re going to give our all to close the season in South Africa with a victory and runner-up finish.”

Before the season’s finale in Cape Town (South Africa) six weeks from now (November 24–25), EKS Audi Sport in second position of the teams’ classification has expanded its advantage over its immediate rival, Peugeot, to 70 points and, as a result, can be sure to finish the championship runner-up. In the drivers’ classification, Mattias Ekström with 228 points is ranked in second place of the standings; Andreas Bakkerud (224 points) has advanced to third position.