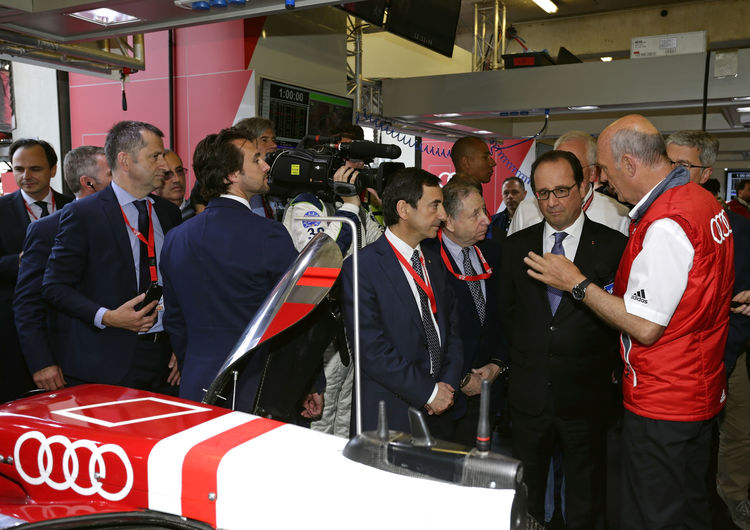 The 24-hour race at Le Mans is one of the world’s biggest sporting events, which attracts several hundreds of thousands of fans and many prominent guests. Audi is, as most successful brand in recent Le Mans history, particularly popular.

State visit in the Audi pit

Tom Kristensen was given a Police escort last year as he drove through Le Mans city center at the wheel of an Audi R18 e-tron quattro. On behalf of Audi Communications, the record winner of the 24 Hours of Le Mans thanked the local authorities by visiting the ‘Hôtel de Police’ in the French city where he met the motorcyclists who had escorted him on his drive through Le Mans in 2014. Kristensen busily signed autographs and presented a freshly printed copy of his biography ‘Tom Kristensen – The Book’. “The visit was a wonderful surprise, because usually the Police get hardly any recognition for their work,” said delighted acting Division Inspector François Chaumard. Kristensen received a special plaque as memento of his visit and was allowed to sit in a Police car to conclude the occasion. Of course, he couldn’t resist testing the police siren...

Even though they’ve now enjoyed it for a third time, it was still a very special moment for André Lotterer, Marcel Fässler and Benoît Tréluyer: On Monday afternoon, at the Place Saint-Nicolas in the Le Mans city center, ACO President Pierre Fillon unveiled the bronze plaque on which the handprints of last year’s Le Mans winners are captured for posterity. In 2014, the three Audi drivers celebrated an amazing third win together in the Le Mans 24 Hours, and this weekend will battle for yet another win at the wheel of the Audi R18 e-tron quattro in the world’s most important endurance race.

Anniversary at the 24 Hours of Le Mans: Audi supplies the security cars for the world’s most famous endurance race for the tenth time in succession. No less than 25 vehicles from the Audi RS 3 to the R8 are stationed around the 13.629-kilometer track in Le Mans, and ensure safety and rapid assistance in the sign of the four rings. In action for the first time in 2015: an Audi RS 4 for Race Control, which transports the high-voltage specialists from the relevant teams to the stricken hybrid sportscars. However, Audi does not only supply the security vehicles at Le Mans: as early as 2010, Audi expanded its involvement to cover every round of the Intercontinental Le Mans Cup (ILMC), which in 2012 became the FIA World Endurance Championship (WEC), which also includes the French classic.

Audi’s tire partner Michelin honored last year’s winners of the iconic 24-hour race at Le Mans with ultra-sporty gifts. Marcel Fässler, André Lotterer and Benoît Tréluyer received a personalized version of the Audi Sport Racing Bike. The light, 5.8-kilogram carbon race machines bear the names of the respective drivers and sport special liveries that take on graphic elements of the Audi R18 e-tron quattro. “These are literally unique gifts that found their way into the right hands with us,” said a delighted André Lotterer, who, like his Audi team mates, is an enthusiastic cyclist.

Tom Kristensen made his first outing at the wheel of the new Audi R8 LMS at Le Mans. The Le Mans record winner completed two laps of the ‘Circuit des 24 Heures’ in the new GT3 racecar on Thursday evening. On Saturday, he appears in a new production R8: in his function as the race’s ‘Grand Marshal’, he leads the field of starters on their warm-up lap in the leading car.

Between the DTM races at the Lausitzring and at the Norisring (27/28 June), Audi DTM driver Mike Rockenfeller made a detour to the 24 Hours of Le Mans to support Audi Sport Team Joest at the track. The 2010 Le Mans winner is involved as test and reserve driver in the Audi R18 e-tron quattro development program. An ARD camera team accompanied ‘Rocky’ in Le Mans.

600 guests in the Audi Camp

The Audi Camp has become an essential institution at the 24 Hours of Le Mans. Since the turn of the new millennium, twelve enthusiastic Audi Sport employees organize in their spare time, a tent and mobile home camp for colleagues and brand partners in the middle of the legendary race track. This year, the interest to support their racing colleagues in the fight for victory from trackside was so large that the camp area had to be extended by 1,500 square meters. About 600 guests in the Audi Camp cheer on their brand.

Audi joined the list of winners of the 24 Hours of Le Mans for the first time in the year 2000. A historic moment for the brand with the four rings. Tom Kristensen was one of the three drivers of the victorious Audi R8 at that time. Fifteen years after the important victory, Kristensen and the original car returned to the French track to participate in a parade of famous Le Mans cars. The Le Mans record winner even reactivated the helmet and race overalls used at that time for the historical event.

14 men, one woman, 1,096 kilometers – ‘Audi Biking Xperience’ cyclists tackled the journey from Neckarsulm to Le Mans with pure muscle power. “Once a year, we set off on a longer tour, which always has something to do with the brand or the company,” explained co-initiator Bruno Gurr, who has already cycled to Lamborghini and Ducati in Italy with his Audi colleagues, or from Peking to the VW factory in Changchun. This time around the journey led to Le Mans. “Audi Sport performs exceptionally at Le Mans, we wanted to acknowledge this with an exceptional event,” said Burr. In typical Audi fashion, the cyclists relied on efficiency: riding in the slipstream in two rows saves 30 per cent muscle power.

Two Audi drivers celebrated their birthdays at Le Mans this year: Loïc Duval turned 33 years of age on Friday, and accepted the best wishes from his mechanics and fellow drivers in the pits immediately at the end of final qualifying. Filipe Albuquerque celebrated his 30th birthday on Saturday. Audi Sport Team Joest welcomed the Portuguese early in the morning with a cake and a round of congratulations – evidently excellent motivation for the day: Albuquerque recorded the fastest lap in the warm-up just a few minutes later.

Highlight for fans at Le Mans

A special attraction again this year for spectators at Le Mans is the Audi Fan Area. In addition to the current Audi R18 e-tron quattro, the fans can also admire the Audi R8 at the fan area with which Frank Biela, Tom Kristensen and Emanuele Pirro clinched the first of 13 Audi victories in the endurance classic in the year 2000. The view from the balcony at the location on the track section before the Dunlop corner is also unique. Visitors can also test their skills in the Audi R18 e-tron quattro race simulator or have a picture taken with the Le Mans winners’ trophy.