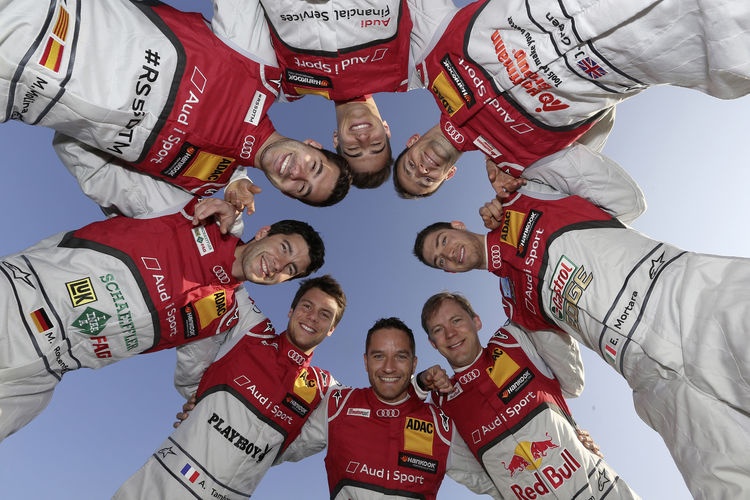 A redeeming moment for Audi’s motorsport fans: Exactly 195 days without DTM will be over when another DTM race starts at Hockenheim on Saturday, May 2, at 14.48 after a long winter break – followed by the next one less than 24 hours later.

The DTM Festival at Hockenheim will be the first practical test for the new weekend format with races scheduled on Saturday and Sunday. “We’re offering fans a double dose of action this year,” says Dieter Gass, Head of DTM at Audi Sport. In addition to the DTM, motorsport fans can look forward to the new Audi Sport TT Cup celebrating its world debut at Hockenheim – with races on Saturday and Sunday as well. Last but not least, the FIA World Rallycross Championship (World RX) will be visiting Hockenheim for the first time. Three Audi privateer teams will be on the grid with their near-600-hp Supercars. A supporting program featuring autograph sessions, stunt shows, parties and concerts  has been arranged to perfect the weekend.

“For Audi fans, Hockenheim will particularly be worth a visit this year,” Dieter Gass is convinced. “We’re determined to pick up in racing where we left off on clinching the DTM manufacturers’ title with a one-two-three result in last year’s finale.”

A total of eight Audi RS 5 DTM cars will be on the Hockenheim grid on the first weekend in May. The technology has remained nearly unchanged due to the freeze imposed by the regulations on the current-specification cars.  Still, the three manufacturers intensively worked on minute details last winter. “The lap times set in the tests aren’t really conclusive,” says Gass. “The only thing you can do is compare your own data with last year’s and rely on the work done in winter. We’re confident based on what we’ve seen so far. But we won’t see the real picture until Hockenheim.”

The Audi drivers are excited about the forthcoming season opener as well. “ I really look forward to the Saturday at Hockenheim and the first qualifying session every year,” says the Swede Mattias Ekström, who won the final race in 2014 and is one of the three DTM Champions to battle for title honors for Audi in 2015. “Hockenheim with the DTM, TT Cup and Rallycross on a single weekend is a rare opportunity this year and as a fan I’d be sure not to miss out on it,” Ekström adds.

Due to the extensive program the spectacle will start on Thursday with free practice sessions scheduled for the drivers of the Audi Sport TT Cup and the World Rallycross Championship. The first outing of the eight Audi RS 5 DTM cars will be on Friday morning. The really serious part will begin for the Audi Sport DTM squad on Saturday when events are going to follow each other in quick succession: free practice at 9.00, qualifying at 12.00 and the start of the first race at 14.48. The schedule on Sunday is similarly dense: warm-up at 9.00, qualifying at 10.35, race 2 at 13.43.

Tickets for the DTM Festival at Hockenheim can be ordered online at www.audi-motorsport.com. ARD will be airing live broadcasts on ‘Das Erste’ (Saturday starting at 14.30, Sunday starting 13.20 – local time). Live coverage of the races will be provided by numerous TV channels around the globe as well, or it can be watched on the DTM’s YouTube channel. Audi Sport will be offering a new service at the DTM season opener. Following the free practice and qualifying sessions and the two races, there will be live video interviews with Audi drivers on the new Social Media platform Periscope.