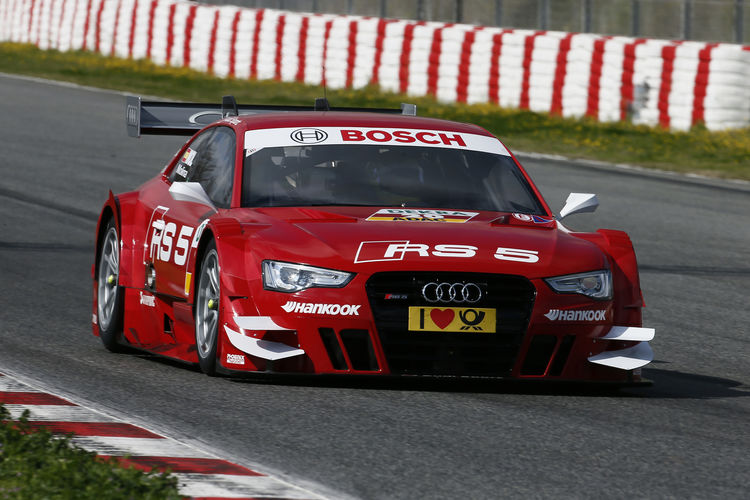 Only five weeks to go before the new DTM season starts at the Hockenheimring. During testing at the Circuit de Catalunya in Barcelona/Spain, the Audi DTM drivers spooled off over 7,000 kilometers in the Easter week with the Audi RS 5 DTM and made important findings in the process.

At the first of two official DTM tests before the season opener, the four Audi RS 5 DTM were partially equipped with additional data acquisition equipment in order to log as much data as possible, which will now be analyzed by Audi Sport in Ingolstadt and the three Audi Sport teams Abt Sportsline, Phoenix and Rosberg. During the course of the test, all eight Audi drivers tested the so-called option tires, which should make faster lap times possible for a few laps in the race, and the ‘Drag Reduction System’ (DRS), with which the rear wing can be adjusted by pressing a button on the steering wheel. Both might be used in 2013 in the DTM.

Each of the eight Audi drivers tested for two days at Barcelona. Busiest of all was double DTM Champion Timo Scheider who clocked up 346 laps around the 2.977-kilometer track, and recorded the fastest time (1m 06.844s) for an Audi RS 5 DTM on the last of the four test days.

Mattias Ekström, Jamie Green and Adrien Tambay worked together with their new race engineers at Barcelona. The four Audi RS 5 DTM cars ran in the designs they will sport when driven in the 2013 season by Jamie Green (Red Bull), Miguel Molina (Audi RS 5), Mike Rockenfeller (Schaeffler) and Adrien Tambay (Audi ultra). The designs of the other four Audi RS 5 DTM cars will be revealed during the DTM tests at Hockenheim between April 9 and 12, where a grandstand is opened for spectators on the first day.

Comments from the Audi drivers

Filipe Albuquerque (303 laps/1m 07.257s): “It was great to finally sit in a car again and to see in which direction Audi Sport had developed the RS 5 DTM over the winter. I’m happy with the results. On the first of the two test days, we had a few difficulties with car, which we understood and solved – from the third day onwards we were at the same level as the others. The track conditions were generally a little tricky at Barcelona. The option tire and DRS are definitely a step in the right direction. The ITR is doing something to improve action on the race track. This deserves recognition. DRS will allow us to get closer to the car in front and fight side by side.”

Mattias Ekström (300 laps/1m 07.354s): “I have a new race engineer for the first time since 2001, which is why it was important for me at this test to gel and to be on the same wavelength as the team. This was a success. We had some productive days and completed 300 laps during which we learnt a great deal. The eager anticipation increases when you finally get out track with our competitors cars. I think that the fans can look forward to an exciting year. We’ll only really know exactly where we stand in the opening race at Hockenheim. However, my impression is that it’ll be incredibly close. The option tire and correct use of the DRS can play an important role.”

Jamie Green (268 laps/1m 07.171s): “After a difficult start on the first test day at Barcelona, my second was much better. We managed to work through our plan and tick all the boxes, which we had on the list. It’s a good feeling. The track was dry; there were no interruptions and not a single technical problem. We clocked up a lot of kilometers. It’s of great importance to me right now. There’s only one thing that helps me to get a feeling for the Audi RS 5 DTM: lots of laps. The same goes for working together with my race engineer and my data engineer – the test at Barcelona was a great opportunity for this. The DRS rear wing also made a positive impression. The effect won’t be as big as in Formula 1 and overtaking not easy. However, the DRS will help with overtaking. We also learnt a lot about the option tires, which are much quicker than the standard tires.

Miguel Molina (327 laps /1m 07.112s): “It was a fantastic feeling to finally sit in a racecar after such a long and hard winter. From my point of view the test was a success. It was less about setting fast lap times, but actually more about completing our busy test program. We’ve improved our understanding considerably and collected a lot of data, which will move us a step forward in preparation for the season – also with regard to the option tire and DRS. Both will make the races even more interesting. Every outing at Barcelona is special for me: I started my motorsport career here in a single-seater at that time, and am proud every time to return as professional racing driver. Especially with this car: my Audi RS 5 DTM is just fantastic.”

Edoardo Mortara (228 laps /1m 07.439s): “Of course it’s great to get out on track again with the car after such a long break. However, I would like to have stayed here a little longer after the test. I’m not entirely satisfied with the basic set-up of the car. We have a lot of work to do during the next test at Hockenheim. Anyway, it wasn’t possible to judge the real performance within the DTM field here. I really like the DRS. I really hope that we can run with the system this year. In my eyes this is the right way to get more overtaking and in doing so to make the races more interesting. After all, it also works in Formula 1. The same applies to the option tires.”

Mike Rockenfeller (290 laps /1m 07.070s): “We tried a lot over the course of the two days I was in the car Barcelona, and learnt a lot in the process. In general, I’m really satisfied. However, it’s very difficult to assess the lap times with all these new things like DRS rear wing and option tires. You just don’t know whose using what. DRS has functioned perfectly so far and brings a lot – more speed on the straights and faster lap times. The aim is to provide more overtaking opportunities – this is fantastic for us drivers and at the end of the day for the spectators as well. I was able to try the option tires on the second day. This was very important. It’s difficult to make a genuine assessment because the track conditions changed frequently and a lot. As a whole, Barcelona was very informative. I’m already looking forward to the next test at Hockenheim in 10 days.”

Timo Scheider (346 laps /1m 06.844s): “It was great to sit in the cockpit of a racing car after such a long break. At first, I had to get used to the DTM car again, but I was soon up to speed. It may well sound as if you’ve heard it all before, but we got through up to 90 per cent of our test program – although it’s extremely difficult to draw any conclusions: sometimes it was very sunny and warm, then cloudy and cooler again. This is why the track conditions were very different. I tested the option tire for the first time on Friday afternoon – and I was very impressed: these tires make a DTM car even more fun to drive! After you’ve tested them once, you don’t actually want to change back to the standard tire. The DRS rear wing is noticeable. I think the time has come to change something. The fans want to see overtaking. DRS and option tires will help this.”

Adrien Tambay (310 laps/1m 07.274s): “It was important for me to get back into the cockpit of my car after the long winter break, and especially because I have to gel with my new race engineer. This worked very well at Barcelona. Franco (Chiocchetti) and I completed a lot of work, but we still have a huge amount ahead of us. This is why I’m already looking forward to the next test at Hockenheim and obviously the first race. We don’t have many opportunities to test the option tires. They should be good for the show and the fane. The DRS is also a good idea when it works. You really feel it in the car.”