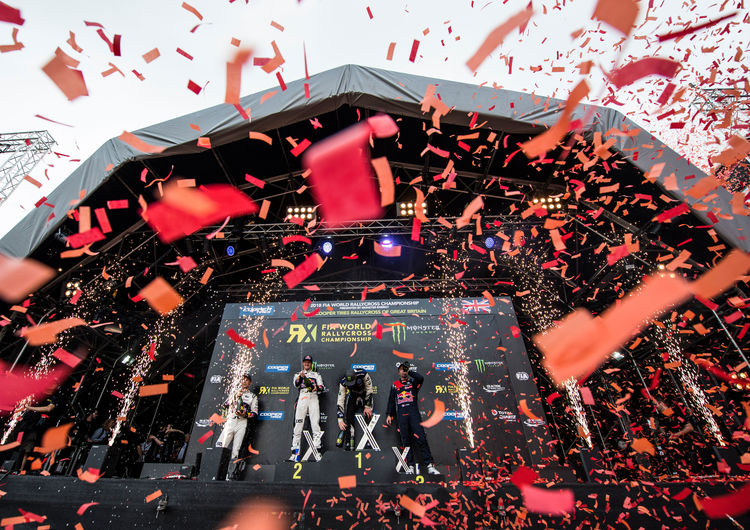 Huge celebrations in Silverstone (Great Britain): in his fourth event for EKS Audi Sport in the FIA World Rallycross Championship (World RX), Andreas Bakkerud made the step onto the winners’ podium for the first time after finishing second. Mattias Ekström completed the strong showing of the powerful 580 hp Audi S1 EKS RX quattro with fourth place.

The first outing for the World Rallycross Championship on the traditional race track in Silverstone was a complete success. Thousands of spectators celebrated for three long days the Speedmachine festival, at which they enjoyed incredibly exciting motorsport. As was the case in the opening three World Championship rounds, Audi, Peugeot and Volkswagen battled on a totally equal footing on the new race track.

For the third time this year, both EKS Audi Sport drivers qualified for the final featuring the best six. Starting alongside each other on the second row, Bakkerud held a better line in turn one and in doing so secured second place behind Johan Kristoffersson in the Volkswagen. The Norwegian missed out on victory by a mere 0.859 seconds.

Ekström initially lay immediately behind the leading duo. After the joker lap, the Swede was passed by Sébastien Loeb and ultimately had to settle for fourth place. “I didn’t realize that Loeb was so close behind me, which is why I stayed on the normal racing line,” said Ekström. “There was no jackpot for me today, but we took a good haul of points. And of course the podium for Andreas is fantastic. Our fight in the first corner was fair. Overall as a team we can be satisfied because we have made progress. Our starts are now more consistent.”

Bakkerud made his fourth appearance in the final on his fourth start for EKS Audi Sport. After having inherited third place at the season opener in Barcelona due to his team mate being excluded from the results, he took his first ‘real’ podium at the wheel of the Audi S1 EKS RX quattro in Silverstone. “It feels great to be on the podium for the first time with my new team and Audi,” said Bakkerud. “The pressure on me has now dropped. First I had to familiarize myself with the new car, but I’ve now achieved this thanks to the fantastic support from the entire team. I look forward confidently to the rest of the season, because now my favorite race tracks are looming on the horizon and my home race in Hell. Speedmachine in Silverstone was a fabulous premiere event – congratulations to the organizers!”

Bakkerud and Ekström improved in the drivers’ standing to take third and fifth places respectively. In the teams’ classification EKS Audi Sport moved up to second place.