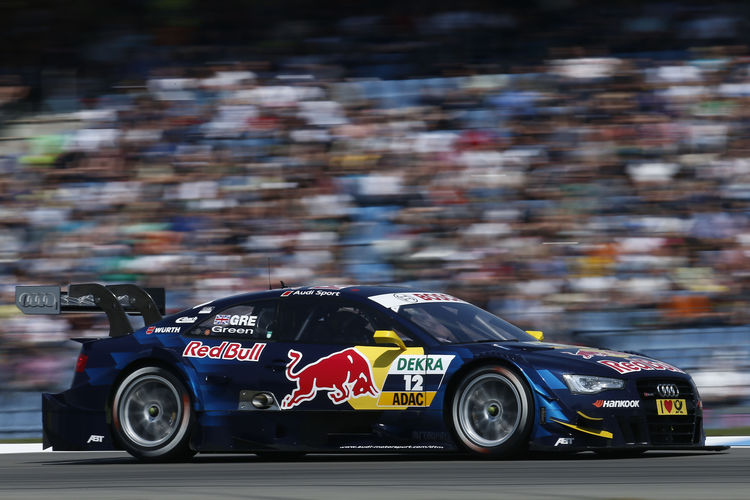 A week before the Champions League final, London will be under the banner of motorsport. On its European tour, the DTM will stop on the outskirts of the British capital on May 18 and 19. Following the disappointing season opener, the Audi squad is dying for rectification and in pursuit of this aim is also banking on newcomer Jamie Green, who will be contesting his first ‘home round’ for Audi at Brands Hatch.

The first race of the new season showed that the fans are experiencing even more action, overtaking maneuvers and moments of surprise this year due to option tires and a rear wing flap (DRS) that can be adjusted by the driver on the track. Now the fans and the drivers are equally eager to see what effect the innovations will have on the 1.929-kilometer, and thus shortest, circuit on the DTM calendar, and how the relative strengths will pan out on this race track with its unique characteristics.

Audi Sport and the Audi Sport Teams Abt Sportsline, Phoenix and Rosberg are tackling the event at Brands Hatch with high motivation. Although Timo Scheider, on clinching the pole position at Hockenheim, set an initial exclamation mark the eight drivers clearly stayed below their potential in the race with position six as the best Audi result and only one more position in the points. This is to change in Great Britain.

The omens are positive, as on three previous occasions Audi drivers, including the two double Champions, Mattias Ekström and Timo Scheider, entered their names on the winners’ list of this race. Most recently, Martin Tomczyk, on his way toward the title win in the 2011 season, was successful at Brands Hatch. In 2012, Mike Rockenfeller started the race from grid position four and finished in third place.

At Brands Hatch, the DTM is again racing on the short configuration of the circuit. The so-called ‘Indy Circuit’ has clearly more right- and left-hand turns and, unlike the long ‘Parabolica’ at Hockenheim, offers only few sections in which the drivers can truly use the DRS for overtaking. The 98 laps on Sunday demand extreme concentration of the drivers. This applies to the crews in the pits and at the command posts as well. There is no other track on which strategy and the right timing of the mandatory pit stops are as important as at Brands Hatch.

For the first time since Oliver Jarvis raced in 2011, Audi is competing again with a Briton in the DTM this year. Newcomer Jamie Green will contest his first ‘home round’ for the brand with the four rings at Brands Hatch. A large number of fans and friends will accompany the 30-year-old Audi factory driver, who on his 2006 debut at Brands Hatch only missed a triumph by an extremely narrow margin. The winner back then was Mattias Ekström, who now is his team-mate.

The number 20 Audi RS 5 will feature new graphics at Brands Hatch, as soccer fan Miguel Molina on his car advertises the Audi Cup to be held in Munich on July 31 and August 1. At Audi’s invitation, FC Bayern München, Manchester City, AC Milan and the top Brazilian club FC São Paulo are meeting at the Allianz Arena for a brief tournament.

ARD will broadcast the DTM qualifying session on Saturday (May 18) from 14:30 CEST live on “Das Erste” and the race on Sunday (May 19) at the usual time, starting at 13:15 CEST. Due to the TV broadcast in Germany the race will start at 12:30, local time (13:30 CEST). Tickets for all DTM races of the 2013 season are available at www.audi-motorsport.com/dtm

Dieter Gass (Head of DTM): “We’re traveling to Brands Hatch with optimism. At Hockenheim, particularly on Saturday, we saw that the performance of our RS 5 DTM is basically good. That was important. Now it’s up to us to exploit this potential. I’m sure that at Brands Hatch we’ll be experiencing a very close race. The innovations like DRS won’t be playing such a role there because the straight isn’t long enough. But I’m convinced that the fans can still look forward to a lot of interesting duels.”

Hans-Jürgen Abt (Team Director Audi Sport Team Abt Sportsline): “The time between the season opener with its many innovations in the regulations and the next race at Brands Hatch isn’t very long. That’s why it’s crucial for us to jointly assess, analyze and, of course optimize, all the experiences and data we gathered at Hockenheim. And then we’ll arrive in England perfectly prepared.”

Ernst Moser (Team Director Audi Sport Team Phoenix): “Knowing the basic performance of our car, we’re looking forward to Brands Hatch. With the option tires on this short track we’ll probably be seeing many different strategies. The fans can look forward to a thrilling race.”

Arno Zensen (Team Director Audi Sport Team Rosberg): “I’ve got good and bad memories of Brands Hatch. A good one is that Filipe (Albuquerque) was among the front runners for a long time last year before losing ground due to a slow pit stop. We’re going to do better in that respect this time.”

Filipe Albuquerque (27/P), Audi Financial Services RS 5 DTM #6 (Audi Sport Team Rosberg)
•  Finished in the top ten at Brands Hatch in 2012
•  Received a drive-through penalty at Hockenheim for speeding in the pit lane
“I’m looking forward to the race at Brands Hatch. Until then, we’re going to continue to analyze all the experiences from Hockenheim. The DRS won’t help us a lot on this track but the option tires are huge fun even over a distance of barely two kilometers.”

Mattias Ekström (34/S), Red Bull Audi RS 5 DTM #11 (Audi Sport Team Abt Sportsline)
•  Won the DTM’s first race at Brands Hatch in 2006
•  Was on the podium at Brands Hatch on four previous occasions
“I’ve got several fond memories of Brands Hatch, for instance of my victory at our first round there. Qualifying will be very important because overtaking, despite DRS and option tires, will be more difficult than at the last race at Hockenheim. That’s why I’ll be investing even more energy than usual to start as far at the front as possible.”

Jamie Green (30/GB), Red Bull Audi RS 5 DTM #12 (Audi Sport Team Abt Sportsline)
•  Will have his first ‘home round’ at Brands Hatch for Audi
•  In 2006, took second place on the tradition-steeped English track
“It’s always very special for me to race in front of a crowd of my fellow countrymen – after all, this doesn’t happen very often. It’s a bit unfortunate that we’re traveling to the UK right for our second race of the season because I’m still in the process of gelling with Audi and my team. But I’ve personally had to experience the fact that Audi was always strong at Brands Hatch in the past – so I’m optimistic that we’ll be in contention for a good result.”

Miguel Molina (24/E), Audi RS 5 DTM #20 (Audi Sport Team Phoenix)
•  Just barely missed the podium at Brands Hatch in 2010
•  Is advertising the “Audi Cup” soccer tournament in Munich on his RS 5 DTM
“The layout of the track is really different, but I like it. I’ve always managed well at Brands Hatch and am hoping that we’ll be able to show our potential even more clearly. Obviously, 98 laps are rough for us drivers – but that’s DTM. As a soccer fan, I’m happy about the new graphics of my race car. I just met Javier Martínez at an Audi event in Munich, so at the Audi Cup I’m of course going to keep my fingers crossed for FC Bayern.”

Edoardo Mortara (26/F/I), Playboy Audi RS 5 DTM #5 (Audi Sport Team Rosberg)
•  Was on the podium at Brands Hatch in 2011
•  Damaged his front splitter at Hockenheim and was forced to retire
“At Hockenheim, we got a first impression of how competitive we are with our RS 5 DTM this year. Now we’re going to make use of this and aim to achieve a better result at Brands Hatch than at the season opener.”

Mike Rockenfeller (29/D), Schaeffler Audi RS 5 DTM #19 (Audi Sport Team Phoenix)
•  Was on the podium at Brands Hatch last year
•  After the race in England, will travel directly to the Nürburgring 24 Hours
“Hockenheim wasn’t very successful for me, so I’m happy that we’re moving on to the next race right away. I was running really well at Brands Hatch last year and want to battle for victory again this time. With all the traffic on this small track, strategy will play an important role.”

Timo Scheider (34/D), AUTO TEST Audi RS 5 DTM #23 (Audi Sport Team Abt)
•  Started the season at Hockenheim with the pole position
•  Won at Brands Hatch in his Championship-winning year of 2008
“Pole position, race victory, setbacks – I’ve practically experienced everything at Brands Hatch in the past few years. I’m hoping to add some more good moments this time. We’re taking the things that went well at Hockenheim with us as positive energy. And all the things that went wrong we’re going to do better at Brands Hatch.”

Adrien Tambay (22/F), Audi ultra RS 5 DTM #24 (Audi Sport Team Abt)
•  Is again advertising the “Iron Man 3” movie on his car at Brands Hatch
•  At the season opener, had to retire after just four laps due to a fire on his car
“I’m looking forward to an exciting weekend in England. A short track, a lot of traffic, pit stops, option tires – it’ll be a tricky event. Hopefully, after my early retirement at Hockenheim, this will be my first real race in the 2013 season.”

All Brands Hatch winners since 2006

Mike Rockenfeller laid the foundation for the podium result right at the start. In his Schaeffler Audi A5 DTM, he overtook Christian Vietoris’ Mercedes-Benz that had started from the front row and thus advanced to third place behind the subsequent winner Gary Paffett and Bruno Spengler. In the final phase of the 98-lap race, ‘Rocky’ closed the gap to the second-placed BMW but was no longer able to overtake. Mattias Ekström in the Red Bull Audi A5 DTM recovered from position eight on the grid to fifth place. In total, five Audi A5 DTM cars finished in the points.

Miguel Molina about Brands Hatch: “The Indy Circuit isn’t very long but tricky nonetheless – also because of the small run-off areas. There’s little room for mistakes, you’ve always got to be fully concentrated. Turn 1 is really special. You can feel how steep you go downhill after this pretty fast turn and how much the car and your body are compressed down in the dip. And then the best and almost only place for overtaking follows. A specialty of Brands Hatch is the large number of laps we drive there. I always tell my mechanics not to start counting down on the pit board before the last 20 laps.”