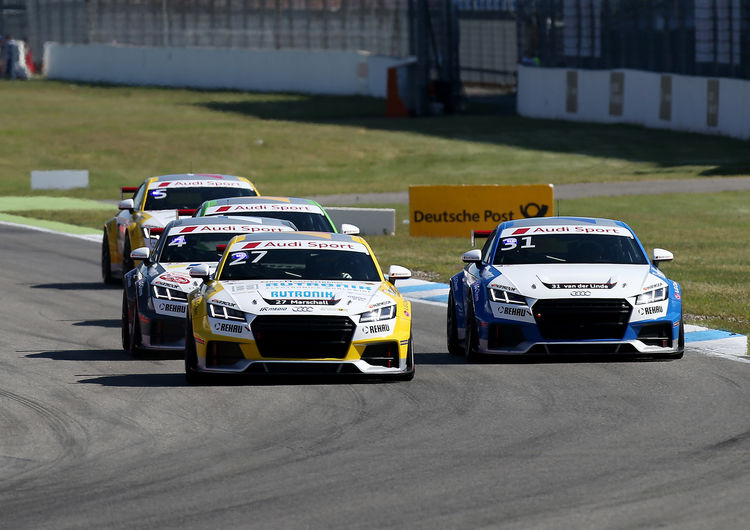 The finale in the 2016 Audi Sport TT Cup promises suspense galore. Four young talents still have chances of winning the title. In the rookies’ classification, the decision is still pending as well. In the guest entrants’ group, the grid will again include two high-caliber celebrities, actor Jimi Blue Ochsenknecht and YouTube star Tim Burton alias Shmee150. The races in the Audi one-make cup will be held as part of the DTM supporting program on Saturday, October 15 and Sunday, October 16.

It is time for the showdown in the 2016 Audi Sport TT Cup. Twelve of 14 races have been held to date, the driver to succeed Jan Kisiel being sought at the Hockenheimring. In 2015, the Pole had clinched the crown in the Audi one-make cup, subsequently being promoted to Audi Sport’s GT program. On the previous six race weekends in 2016, the international young talents fought many gripping duels as well. Eight drivers from six nations have mounted the podium to date, and four campaigners are now battling for the title.

In the overall standings, 18-year-old Joonas Lappalainen (FIN) is in the top spot with 239 points before the last two races. Dennis Marschall (D) trails him in second place with a nine-point deficit. Sheldon van der Linde (ZA, 197 points) and Nicklas Nielsen (DK, 196 points) still have ambitions of clinching overall victory too, as a maximum of 50 points are yet to be awarded. Van der Linde and Nielsen are additionally competing for the title of best rookie. “The second season in the Audi Sport TT Cup seamlessly picked up where the inaugural year left off,” says Project Leader Philipp Mondelaers. “Our talents delivered superb motorsport to the many trackside fans and those watching the events on television and live streams. Looking at the current point scores in the standings, I guarantee that our fans are going to see a gripping finale.”

The high-caliber guest entrants should be playing their part in making this happen as well. In addition to the two Formula 4 campaigners, Michael Waldherr (D) and Drew Ridge (AUS), attention will mainly be focused on actor Jimi Blue Ochsenknecht (D) and Tim Burton (GB). The Briton, who is better known under his alias of Shmee150, has more than 850,000 subscribers on his YouTube channel. “This is another really exciting line-up, superbly complementing our permanent entrants,” says Chris Reinke, Head of Audi Sport customer racing.

Something really special is planned for Saturday at Hockenheim: On the first Facebook Live Day from Audi Sport there will be an exclusive insight behind the scenes of the big final weekend. Experts like the nine-time Le Mans winner and former DTM driver Tom Kristensen will be analyzing the events, the Audi Sport TT Cup race will be broadcast live and there will be a live linkup from the presentation ceremony and from the pit wall with TT Cup instructor Markus Winkelhock, who also appeared for many years in the DTM, as well as interviews at the ceremony.

Additionally, both races will be broadcast by live streaming on the web at www.audimedia.tv and via the SmartTV-App “Audi MediaTV.” This makes it possible for viewers around the world to watch live coverage of the Audi Sport TT Cup on Samsung, LG, Amazon Fire and Android TV. SPORT1 will be covering race one live on Saturday starting at 16:00 (CEST) on free-to-air TV. Delayed live coverage of the second race will be provided during prime time on Sunday, starting at 20:15.

While the title race in the 2016 Audi Sport TT Cup has entered the crucial stage, the talent search for the next season is in full swing. The application form for the 2017 Audi one-make cup is available online at: www.audi-motorsport.com/de/de/tt-cup.html