Green and Mortara with spirited performance 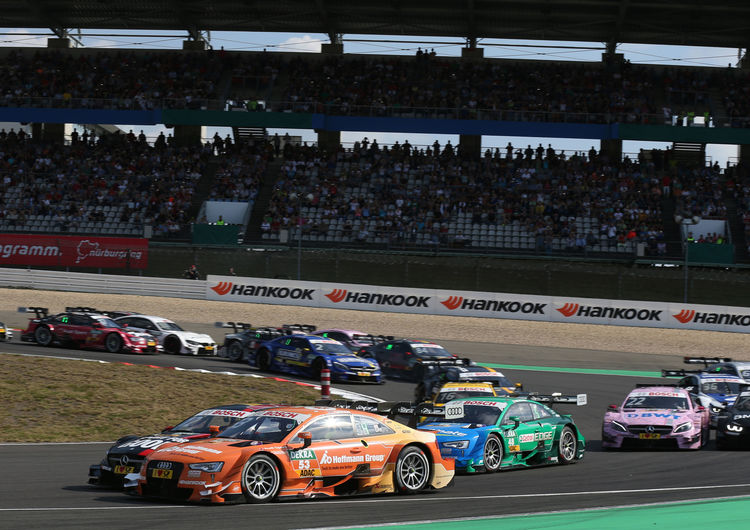 On delivering a spirited performance in the first of the two DTM races at the Nürburgring, Jamie Green (Audi Sport Team Rosberg) and Edoardo Mortara (Audi Sport Team Abt Sportsline) maintained their chances in the title race.

Green and Mortara started the race from positions three and four and finished in the same positions. In between, there were 30 partly spectacular laps on which both of them had to fight hard for their important points.

At the start, Daniel Juncadella in the Mercedes-Benz initially split the Audi duo. However, Mortara recovered position four right on lap one, quickly closing the gap to Green who tried in vain to overtake the second-placed BMW of Tom Blomqvist while the subsequent winner, Marco Wittmann (also BMW), managed to pull clear of the field.

Consequently, Green and Mortara swapped positions and the Italian nearly managed to crack Blomqvist. However, during an attack in the chicane in front of the start and finish the rear wheels of the Castrol EDGE Audi RS 5 DTM locked and Mortara had to take the emergency exit.

In the subsequent position battles, both Audi drivers kept a cool head. After it was clear that Mortara would not be able to overtake Blomqvist, he let Green pass again. After 13 of 18 races, the Briton in his Hoffmann Group Audi RS 5 DTM is now trailing the runner-up in the standings, Robert Wickens (Mercedes-Benz), by only one point.

“It was clear that Tom Blomqvist would make life difficult for us,” Jamie Green said after the race. “When I wasn’t able to overtake him I was hoping for Edo (Mortara) to manage it. Unfortunately, it didn’t work out for him either. Later, in the duel with Daniel Juncadella, I made a small mistake, but was able to correct it again. In the title race, everything remains open – there are still five races to go and 125 points to score.”

“That both of our title candidates were in contention at the front today and clinched good results in positions three and four is a positive,” said Dieter Gass, Head of DTM at Audi Sport. “Last year, we lost a lot of ground here at the Nürburgring because our title hopefuls had problems. That’s why today we’re in a much better position than we were a year ago. The fastest laps set by Jamie (Green) and Edo (Mortara) also show that they had a strong race speed. It makes me optimistic for the second race tomorrow.”

While Green and Mortara started from the second row, the other Audi drivers had to settle for grid positions 15, 18, 19, 20, 22 and 23. Subsequently, they showed recoveries that, in some cases, were remarkable. Most successful was youngster Nico Müller (Playboy Audi RS 5 DTM), who advanced to eleventh place from position 20 on the grid and just barely missed scoring a point.

Timo Scheider (AUTO BILD MOTORSPORT Audi RS 5 DTM) and Mattias Ekström (Red Bull Audi RS 5 DTM) were very fast as well. Scheider was battling for points with runner-up in the standings Robert Wickens but, following a collision with Gary Paffett (Mercedes-Benz), had to drive through the pit lane once and ultimately came in 21st place. Ekström showed an impeccable recovery before encountering Maximilian Götz (Mercedes-Benz), who defended himself so vehemently that the Swede was forced to retire with a damaged car.

For Adrien Tambay (Speedweek.com Audi RS 5 DTM) the race was over early, too, following a collision. Mike Rockenfeller (Schaeffler Audi RS 5 DTM) and Miguel Molina (Teufel Audi RS 5 DTM), who in the morning’s free practice had shone with a best time, occupied positions 14 and 15.

The second race at the Nürburgring will start on Sunday at 15:10. ARD will be airing live coverage on “Das Erste” from the Eifel starting at approximately 15:00.