From hunter to hunted: the new Audi RS 5 DTM 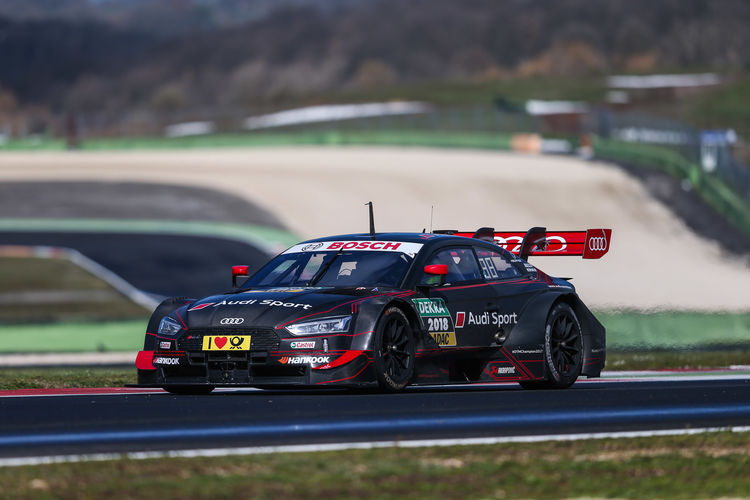 DTM Champion, winners of the teams’ and manufacturers’ classifications, Audi drivers in the top four spots of the table: In 2017, Audi Sport finished the season with its most successful results of all time. In tests at Vallelunga, Italy, the new Audi RS 5 DTM now made its first public appearance. With the further developed championship-winning car Audi Sport will start the 2018 season and therefore its “title defense” project at the Hockenheimring on May 5 and 6.

This year, following the discontinuation of the unpopular performance weights, the drivers in the DTM will take center stage to an even greater extent than before. Previously, in 2017, more powerful engines and softer tires made for more thrilling races. Now aerodynamic downforce of the DTM race cars with more than 500 horsepower has been reduced by about 25 percent compared to last year and the suspensions have been simplified. Per wheel, the regulations now permit only one spring/damper unit. The so-called “third element,” a connection between the two wheels of an axle, is no longer being used. The objective is to bring the field even closer together than before.

“We are in agreement with DTM CEO Gerhard Berger about the future of the DTM,” says Head of Audi Motorsport Dieter Gass. “We do not want to see a never-ending technological arms race and dominance of a single brand, but thrilling, top-caliber races.” The objective is to make the driver and individual performance of the various teams matter to a greater extent. Gass sees the DTM continuing on the right track in the new season: “The further reduction of downforce and simplified suspension promise an even greater spectacle for the fans.”

Since 2013, at 73 events in the internationally popular touring car series, the Audi RS 5 DTM has clinched 32 victories and 26 pole positions, and posted 42 fastest race laps. In each of the past three years, Audi won the largest number of DTM races with a strong overall package. The scope for development has been reduced in major ways this year as areas of aerodynamics which used to be subject to discretionary design – such as the area around the wheel wells – are now specified for all DTM race cars. “Basically, all cars now have the same aerodynamics package,” says Andreas Roos, the new Project Leader DTM at Audi. “Subject to each manufacturer’s individual design are the transition areas between the aerodynamics components and the bodywork of the respective vehicle.” Intensive aerodynamics development as in the past no longer exists. The reduction of downforce has a major effect on the suspension setup and handling of the tires. Overall, there are fewer setup options for the suspension as well so that Audi had to change its previous philosophy. “The pre-season test at Vallelunga provided us with an initial assessment of where we stand, although the weather conditions on both days were not optimal,” Roos says, summing up the tests.

The first pre-season tests with the latest-generation Audi RS 5 DTM (internal project name: RC7) were performed by Jamie Green (GB) and René Rast (D). Having scored eight victories, Green is the most successful driver of the Audi RS 5 DTM to date while Rast sensationally won the DTM title in his rookie season in 2017. “We felt the reduced downforce even during the first virtual tests in the simulator,” says René Rast. This impression was confirmed on the race track. “The cars are now even more challenging to drive than before. For me, personally, this is great fun and the spectators, too, will enjoy the races that will more than likely be more exciting than ever.”

DTM rookie Robin Frijns (NL) had the opportunity to do some initial laps in the Audi RS 5 DTM at Vallelunga as well. Loïc Duval (F), Nico Müller (CH) and Mike Rockenfeller (D) still have to wait their turn until the official DTM pre-season tests at the Hockenheimring from April 9 to 12. There, a month later, the new DTM season will kick off on May 5 and 6. Tickets sales have begun at www.dtm.com/tickets. In Germany, the new TV partner, SAT.1, will air live coverage of the season opener.