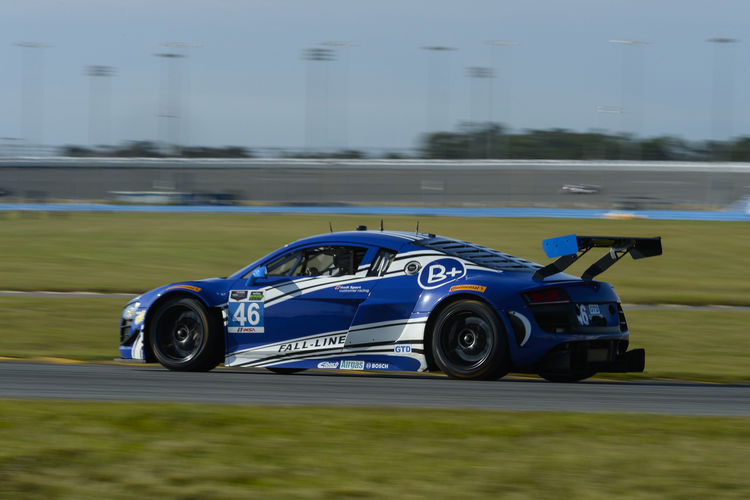 A new era begins in US motor racing on the last weekend in January just a year after the Audi one-two in the GT class of the famous 24 hours of Daytona: the 52nd running of the endurance classic in Florida is the first race of new Tudor United SportsCar Championship (TUSCC). Five Audi R8 LMS cars start in the strongest of the four classes.

Sports car fans in the USA have been eagerly awaiting his day for many months: after the American Le Mans Series and GRAND-AM merged, there is now just a single strong US sports car racing series, in which the most important manufacturers, teams and drivers compete. An impressive field of about 70 prototypes and GT sports cars join the grid for the opener at Daytona on January 25/26. The ‘GT Daytona’ (GTD) class for production-based sports cars, in which the Audi R8 LMS competes, forms the largest contingent.


Audi Sport customer racing developed a GTD version of the successful GT3 customer racing racecar, which makes its race debut at Daytona, specifically for the new US race series. As before, the Audi R8 LMS in GTD form bears the sporting genes of the R8 road car, with which it shares more than 50 per cent of its technology. The ASF aluminum chassis, the robust V10 power plant with rebuild intervals of 20,000 kilometers or the sophisticated suspension incorporating double wishbones are just three examples of this.


“We competed at Daytona a year ago in order to highlight the qualities of the R8,” says Romolo Liebchen, Head of Audi Sport customer racing. “We achieved this perfectly after taking a one-two finish in the GT class. Since then, demand in the USA has risen sharply. We are delighted that four teams now rely on the Audi R8 LMS to begin the TUSCC – particularly as all four teams have a good reputation in the USA. We are intrigued to see how they will measure up at Daytona and in the other races.”


In the season opener at Daytona, which is one of the four highlights of the new US sports car championship alongside the 12-hour race at Daytona, the 6 hours of Watkins Glen and ‘Petit Le Mans’ at Road Atlanta, Audi Sport customer racing supports the US teams technically and with drivers. Marc Basseng (D) and Frank Stippler (D) start for GMG Racing, Filipe Albuquerque (P) and Markus Winkelhock (D) for Flying Lizard Motorsports. Oliver Jarvis (GB) strengthens the Fall-Line Motorsports squad; Christopher Haase (D) and René Rast (D) compete for Paul Miller Racing. Together with Dion von Moltke (USA), three of last year’s four Daytona winners contest the race.


The strong presence of the Audi R8 LMS in the GTD class of the TUSCC, in which GT sports cars representing six different manufacturers compete, reflects Audi’s growth in the United States. With more than 150,000 deliveries, the brand with the four rings recorded an increase of more than ten per cent. The Audi Q5 was especially popular.


Fans get a foretaste for the 24-hour race at Daytona this coming weekend during the traditional ‘Roar Before the Rolex 24’ test from Friday to Sunday, in which all four Audi customer teams are in action. During the race week, the practice sessions are held on Thursday (January 23) and Friday (January 24). The race starts on Saturday (January 25) at 2:30 PM local time (CET +6 hours).