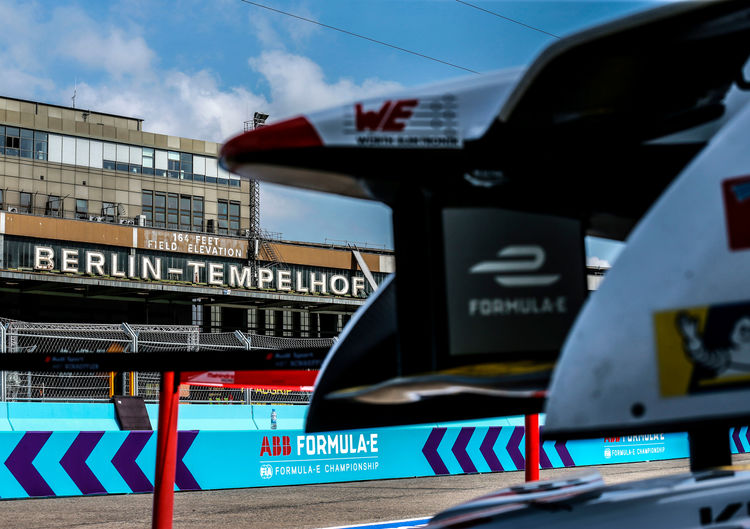 Audi is the first German automobile manufacturer to commit as a factory in Formula E and the Berlin E-Prix on Saturday (May 19) the first home race in the electric race series for the brand with the four rings.

With the DFB cup final between FC Bayern München and Eintracht Frankfurt and the Formula E race there are two big sport highlights this weekend in Berlin. Visitors to the capital are greeted by innumerable Audi posters referring to the Formula E in Berlin-Tempelhof and the new Audi e-tron. The first pure electric powered Audi will be launched on the market at the end of 2018.

Audi draws attention to the E-Prix in Berlin and electromobility via a rather unusual film released on its social media channels: after a night drive through Berlin, the batteries from the Audi e-tron FE04 and the Audi e-tron Vision Gran Turismo power up and illuminate the four rings on the Berlin Olympic Stadium.

150 guests in the Audi Race Lounge enjoy a unique panorama view across the 2.375 kilometer long race track at the former Berlin-Tempelhof airport. On the large 400 square meter Audi stage in the E-Village, visitors to the race can learn and experience plenty about the future topics electromobility and piloted driving.

Even before race day, Daniel Abt received his first award: the German was presented with “Driver of the Day” award from DHL for his comeback drive at the last race in Paris. For this purpose, Abt visited one of the large DHL centers in Berlin, signed autographs and chatted with employees of the long-standing team partner. The highlight was a race in a full-electric Streetscooter against one of the delivery agents, which the professional race driver won by the narrowest of margins.

The two Audi factory drivers Daniel Abt and René Rast staged a very special type of duel: the Formula E driver and the defending DTM Champion competed against each other in the mydays-Erlebniswerk race simulator in the Bikini Center in the heart of Berlin. E-Racing fan Rast just had the edge before subsequently traveling to the DTM race at the Lausitzring.

The new Audi DTM driver Robin Frijns used the opportunity on Thursday on the way to the Lausitzring to swing by the Audi Sport ABT Schaeffler squad in Berlin. The Dutchman raced in Formula E for two years and knows the current Audi e-tron FE04 from the simulator.

Audi partner Schaeffler expects around 450 employees this weekend in Berlin-Tempelhof. Opposite the pit entry is a separate Schaeffler grandstand. On Saturday a round of the RCCO slotcar race series will be held in the Schaeffler Lounge. Guest drivers on the controller buttons are Rahel Frey and Le Mans winner Marco Werner. A 1:24 scale RCCO version of the Audi e-tron Vision Gran Turismo can be seen in racing for the first time.

The E-Prix in Berlin is broadcast simultaneously in Germany for the first time by Eurosport and ARD. Philipp Sohmer and ex-Formula 1 driver Heinz-Harald Frentzen, who celebrated his 51st birthday on Friday commentate in ‘Das Erste.’ Co-commentator alongside Oliver Sittler at Eurosport is Patrick Simon.