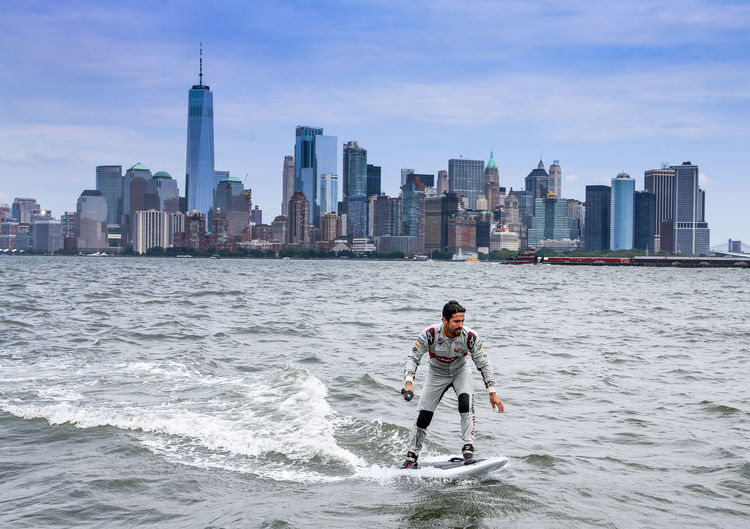 This weekend’s double-header event in New York (USA) marks the end of the fifth season of Formula E. Audi Sport ABT Schaeffler still has chances to claim both titles. With temperatures of over 30 degrees Celsius and high humidity, the drivers expect a tough season finale.

Lucas di Grassi took an unusual route to the racetrack in Brooklyn on Thursday: the Brazilian crossed the Upper New York Bay for a PR appointment on an e-Foil. In keeping with the occasion, the Audi driver wore his racing overalls. The result: spectacular photos set to the backdrop of the Statue of Liberty and the Manhattan skyline. “That was cool,” said di Grassi. “But I wouldn’t recommend swimming in overalls; it absorbs the water quickly and gets really heavy.”

On Thursday morning, Daniel Abt experienced New York from the air. The German took a helicopter tour over Manhattan and sat with his legs hanging out of an open door. “It was a great experience,” said Abt, who had already flown over Manhattan by helicopter two years ago. “But that time the door was closed.”

Miami, Long Beach, New York: USA fan Daniel Abt is the only driver to have climbed the podium at least once at all of the Formula E events held in the USA so far. Lucas di Grassi has celebrated two wins in America: 2016 in Long Beach and 2018 in New York.

Daniel Abt and Lucas di Grassi are the most successful driver pairing in Formula E and will team up again for the sixth season. “I’ve never received as many messages as after the announcement of my contract extension,” says Abt, who on Thursday was confirmed as one of the two drivers of the Audi Sport ABT Schaeffler team for the 2019/2020 season.

Daniel Abt and Lucas di Grassi had a packed schedule between the two Formula E races in Bern and New York, which included a visit to the Festival of Speed at Goodwood in England.

Benedikt Mayr is a guest of Audi Sport ABT Schaeffler at the E-Prix in New York. The German freestyle skier had been towed over an ice racing track by Daniel Abt’s Formula E car at the GP IceRace in Zell am See in January and expressed his wish to see a Formula E race live.

Bram Schot, Chairman of the Board at AUDI AG, and Hildegard Wortmann, the new head of sales and marketing since July 1, are also guests in New York this weekend. The two board members combine their visit to the New York E-Prix with a series of meetings, including with colleagues from Audi of America. On Friday, Schot celebrated his birthday in New York.

Audi partner Schaeffler is represented in New York by Georg F. W. Schaeffler this weekend, the Chairman of the Supervisory Board, as well as Deputy Chief Executive Officer Peter Gutzmer.

Between the two DTM races at the Norisring and in Assen, test and development driver Nico Müller supports the Audi Sport ABT Schaeffler squad at the E-Prix in New York. After landing in the Big Apple, the Swiss had to wait for an hour in the plane as no air bridge was available at the airport.

In Germany, the two final Formula E races can be viewed live on Eurosport and in a live stream on ZDF. ZDF also covers the action in New York in a sports report.