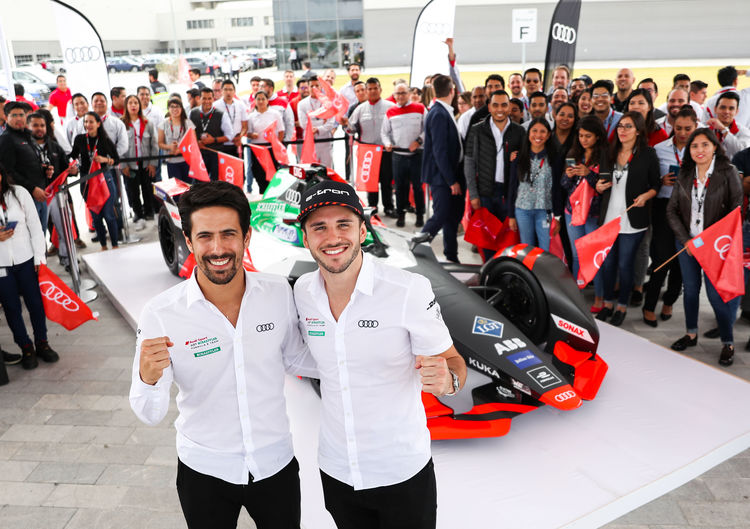 Formula E will make a guest appearance in Mexico City this weekend (race start on Saturday at 4 PM local time/11 PM CET). The two Audi drivers, Daniel Abt and Lucas di Grassi, used the opportunity to visit one of the most modern and sustainable Audi plants prior to the race.

Audi has been producing the Audi Q5* in San José Chiapa in the state of Puebla since 2016, and now also the hybrid version* of the premium SUV.

The Mexican plant is already powered 100 percent by renewable energy and aims to be completely CO2-neutral by 2025.

About 150 employees and guests of Audi Mexico will keep their fingers crossed for Daniel Abt and Lucas di Grassi in Saturday’s race. This has worked well in the past: Audi Sport ABT Schaeffler has been unbeaten in Mexico City for three years.

Formula E stands for technical innovation and at every race, Audi looks for exciting projects and start-ups in the region. On Thursday, Daniel Abt and Lucas di Grassi were allowed to take a look behind the scenes at Biomitech. The young technology company is developing the artificial tree “BioUrban 2.0,” which uses photosynthesis to break down 368 times more CO2 than a natural tree.

After the track walk on Friday morning, both Audi drivers were impressed by the new track layout of the Autódromo Hermanos Rodríguez circuit. “Especially the first section is really cool,” says Daniel Abt. “The final corner is the fastest in the history of Formula E,” adds Lucas di Grassi. “We are driving at well over 200 km/h, this is a real challenge. I prefer the new track layout. It’s more technical than the previous layout with its tight, unpredictable chicanes.”

Thanks to the redesigned final corner, Mexico City has the longest full-throttle section on the Formula E calendar. Combined with the longest race distance to date, fans can look forward to a race in which energy management will play a decisive role and the outcome of the race will probably only take place in the final meters, as it was the case last year. In 2019, Lucas di Grassi secured victory with a spectacular overtaking move right on the finish straight.

In 2018, Daniel Abt celebrated his first ever Formula E win in Mexico – a defining experience. The 27-year-old German even had a Mexican Skull tattooed on his upper arm as a memento of the occasion. Abt is not alone this weekend: Audi has produced temporary tattoos in the form of adhesive stickers that are distributed to all of the team members and fans.

The race in Mexico will start on Saturday at 4 PM local time (11 PM CET) and, as usual, will last for 45 minutes plus one lap. As always, Eurosport will air live coverage. All of the international channels, including the broadcast schedules, can be found online at www.fiaformulae.com.