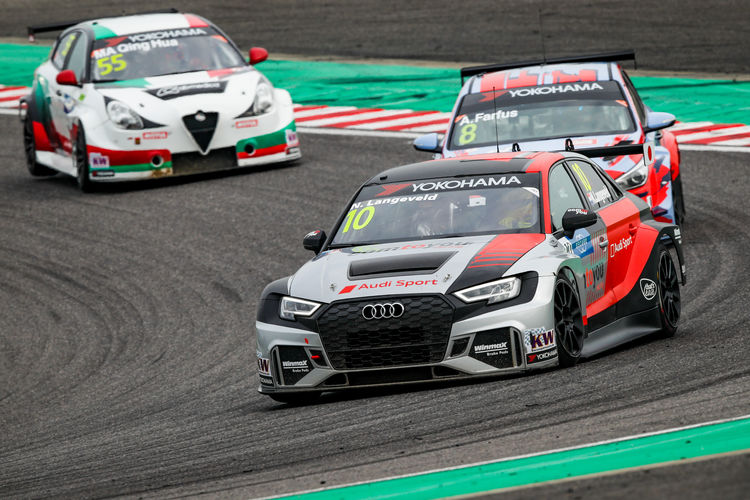 On the eighth race weekend of the WTCR – FIA World Touring Car Cup in Japan, Audi Sport driver Niels Langeveld celebrated his so far best result. The Dutchman from Comtoyou Team Audi Sport led the first race at Suzuka after the start and went on to finish runner-up. In the second and third races, Jean-Karl Vernay from Leopard Racing Team Audi Sport as the best driver of an Audi RS 3 LMS still scored two spots in the top ten in spite of unfavorable grid positions.

As many as 21 penalties after the first qualifying session had clearly mixed up the first grid. All six Audi drivers, who made no mistakes, benefited from this. At the front of the field, Niels Langeveld moved forward from fourth to second position, his teammate, Frédéric Vervisch, from fifth to third and the Japanese wild card entrant Ritomo Miyata from Audi Team Hitotsuyama from seventh to fifth on the grid. Initially, Frédéric Vervisch was engaged in a thrilling battle for the lead with Honda driver Esteban Guerrieri. Niels Langeveld took advantage of the situation and moved to the top spot before dropping to second position due to a small mistake on the track that was new to him. Up until the sixth lap, Vervisch was trailing him in the third spot when a foreign object got caught between the brake caliper and the left front wheel and subsequently destroyed the rim.

On finishing runner-up, Langeveld in his maiden WTCR season celebrated his first podium. For the Audi RS 3 LMS, it marked the seventh podium this season and the 24th since the series’ inaugural season in 2018. Two other Audi drivers shortly behind Langeveld showed strong performances as well. In his first race in an Audi RS 3 LMS, Ritomo Miyata had dropped from fifth to tenth position at the start but subsequently made up three spots. He trailed Frenchman Jean-Karl Vernay, who in the RS 3 LMS of Leopard Racing Team Audi Sport initially stormed forward from eleventh to sixth position. However, a defective shifting actuator put an early end to Miyata’s fast drive on lap 15. In the second race, Jean-Karl Vernay from 13th on the grid managed to fight back to ninth, while Frédéric Vervisch improved from 18th to 13th place. In 17th, Ryuichiro Tomita marked the best result of one of the three wild card drivers for Audi Team Hitotsuyama throughout the weekend. Gordon Shedden from Leopard Racing Team Audi Sport saw the checkered flag three positions behind him. In the final third race, Jean-Karl Vernay from 14th on the grid made up four positions once more while Frédéric Vervisch again advanced from 18th to 13th place and, following penalties for rivals, subsequently moved up to the eleventh spot. In position nine, Vernay is now the best Audi Sport driver in the standings.

“Congratulations to Niels Langeveld and his team on his first podium finish,” said Chris Reinke, Head of Audi Sport customer racing. “While we were good on a wet track in qualifying we were struggling quite a bit on a drying track in the second session. Consequently, we didn’t have good grid positions for races 2 and 3. Even so, Jean-Karl Vernay and Frédéric Vervisch each pulled off some remarkable overtaking maneuvers. A ‘sincere thank you’ also goes to Audi Team Hitotsuyama that added a good showing to the FIA WTCR and delivered attractive performances at its home round.”

The next FIA WTCR round will follow in Macau in three weeks’ time. From November 14 to 17, the touring car drivers will be pitted against each other on the narrow and challenging city circuit in Asia in the penultimate of ten events. Jean-Karl Vernay and Frédéric Vervisch each celebrated a victory in an Audi RS 3 LMS there last year.