First “match point” for Audi in the DTM

{{ activeItem() }}
Twitter
09/19/20
Innovator tested, visionary approved. The Audi Q4 Sportback e-tron concept. #Audi #AudiQ4 #etron #Sportback… https://t.co/fI3WfYN2PA
09/18/20
“It is our task to leverage our technical and engineering competence to provide answers which are enabling society… https://t.co/usLMaXlxa7
09/18/20
Watch the latest episode of #WhatsUpAudi to find out more about the new Q2 #generation and its striking #design &gt;&gt;… https://t.co/DUKsAYe75t
09/18/20
Sophisticated #technology meets #sustainability in the #Audi #A3 Sportback 30 #gtron. Running on #natural #gas or… https://t.co/816xxFPaXA
Audi on Twitter
YouTube
09/18/20 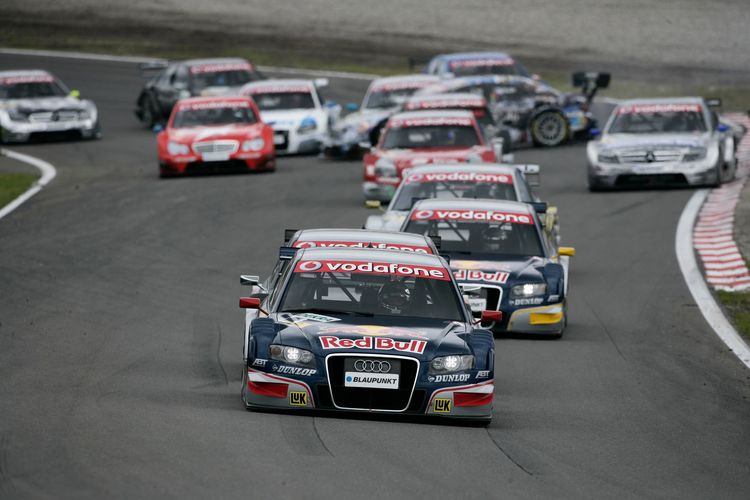 Before the DTM race at the Nürburgring on 2 September one fact is already certain: Audi arrives in the Eifel as championship leader and will also leave at the top of the table. Current leader Mattias Ekström can only be caught be his team mate Martin Tomczyk. With a twelve point deficit, Mercedes driver Bruno Spengler is too far behind.

As a result, Audi already has, mathematically speaking, its first ‘match point’: If Mattias Ekström can increase his advantage to 21 points over the best Mercedes driver, the Swabians would be out of the title race.

So far the theory. The fact is that the pace will be more furious during the closing stages of the 2007 DTM. The race at Zandvoort was merely a foretaste of what the fans in the Eifel can expect: A ‘no holds barred’ duel between Audi and Mercedes-Benz, in which the championship contenders are supported by their team mates. This was always the norm in the DTM.

Furthermore, the 2007 cars from Audi and Mercedes-Benz compete with a weight-difference of just 10 kilograms. The front-runners should be even closer together than more recently at Mugello and Zandvoort, where Audi occupied the top five positions in qualifying on each occasion.

So, a good thing that every Audi driver is a great fan of the Nürburgring and that each and every one has fond memories. Mattias Ekström won at the Eifel track in 2005. Tom Kristensen rounded off a perfect one-two finish on the same day, and won the German Formula 3 title at the Nürburgring in 1991. Martin Tomczyk ended a long lean-streak with a podium finish last year. Lucas Luhr (Koblenz), Mike Rockenfeller (Neuwied) and Timo Scheider (Lahnstein) were all born close to the ‘Ring’ and view the race as their ‘home’ event. Alexandre Prémat defeated former team mate Lewis Hamilton in the GP2 series there last year. Christian Abt has always been a Nürburgring fan. Vanina Ickx describes the Eifel track as one of her favourite circuits, and Markus Winkelhock stole the international headlines only a couple of weeks ago after his sensational Formula 1 debut there.

Due to the athletics World Championship the race at the Nürburgring starts at 3 p.m., one hour later than usual. ARD of German TV extends its on-air time on race day and broadcasts live for two hours from 2:30 p.m.

Quotes before the race at the Nürburgring

Dr Wolfgang Ullrich (Head of Audi Motorsport): “The short break in the DTM calendar has done us all a lot of good. However, we weren’t complacent and continued apace with development of the A4 DTM and were also testing. We are particularly well motivated following our good result at Zandvoort. We know that it’ll be a little tougher for us at the Nürburgring. However, we are well prepared and will once again try to collect as many points as possible for Audi.”

Mattias Ekström (Red Bull Audi A4 DTM #3): “Judging be the way things went between Audi and Mercedes at the last race, the race at the Nürburgring will also be extremely hard. I hope that we are just as quick as last time, can achieve a good qualifying result and finish on the podium. Every point counts in the title battle.”

Martin Tomczyk (Red Bull Audi A4 DTM #4): “Nürburgring, Barcelona and Hockenheim are all circuits that I really like. I always look forward to the Nürburgring a little more than other tracks. We have prepared well for the race during the long summer break.”

Tom Kristensen (Siemens Audi A4 DTM #7): “The summer holiday did me the world of good. The time after my comeback was extremely hard for me. I have now been able to concentrate solely on improving my fitness and concentration in peace and quiet. It’s always a great pleasure to come to the Nürburgring. It is the home of German motorsport for me. I clinched the Formula 3 title for Volkswagen there in 1991. Audi comes as leader to the Eifel. We aim to defend the lead, or better still, increase it.”

Timo Scheider (Gebrauchtwagen:plus/Top Service Audi A4 DTM #8): “I come from the area. So, like every year, I really look forward to the race in the Eifel because a lot of friends and acquaintances turn up. After our performance in Zandvoort, I’m also very optimistic about the Nürburgring. If we stick together as a team like we did last time them maybe I’ll succeed in getting my long overdue podium.”

Mike Rockenfeller (S line Audi A4 DTM #11): “I’m really looking forward to the race in the Eifel: The Nürburgring is my home race, I grew up only 50 kilometres away. With a top strategy we should have a chance of getting a good result.”

Lucas Luhr (Philips Audi A4 DTM #12): “The Nürburgring is my home Grand Prix. The five-week break worked wonders for my motivation. It’s high time that I finally finished in the points.”

Christian Abt (Playboy Audi A4 DTM #16): “The Nürburgring is a track that suits us. Obviously, our cars are now a little heavier again because of the fantastic result at Zandvoort. However, we are not so heavy that we don’t have a chance of scoring points. We won’t spare any effort to achieve the same as we did at Zandvoort.”

Alexandre Prémat (Audi Bank Audi A4 DTM #17): “I’m delighted to be returning to the Nürburgring. I finished on the podium there in GP2 last year and was quicker than (Lewis) Hamilton around this track. I think it’s possible to score another podium finish with the 2006 Audi A4 DTM.”

Markus Winkelhock (Audi A4 DTM #20): “The Nürburgring circuit has always been kind to me. It’s one of my favourite tracks. As we saw recently during the Formula 1 race, the weather often throws a spanner in the works. Maybe I could benefit from this…”

Vanina Ickx (Audi A4 DTM #21): “After the long break, I can hardly wait to get back together with my team and to drive the Audi A4 DTM. I really like this circuit. It suits me just fine that the weather there is often changeable: I love it when it rains.”

Hans-Jürgen Abt (Team Director Audi Sport Team Abt Sportsline): “As far as I’m concerned, things can continue as they finished at Zandvoort. We’ve recharged our batteries during the summer break and look forward to the Nürburgring. We’ve had a lot of fantastic results there. We'll continue fighting for the championship.”

Ernst Moser (Team Director Audi Sport Team Phoenix): “Our performance trend has been improving for some time now. At Zandvoort we were finally able to show our potential, especially as we were able to translate this into a podium finish which isn’t so easy in the DTM. It’ll be difficult to top this, but we want to reproduce our performance at our ‘home’ race.”

Arno Zensen (Team Director Audi Sport Team Rosberg): “The Nürburgring is a home race for me too: I was born locally and spent the first years of my childhood there, which is I why I look forward to visiting the Eifel a little more. I hope that we’ll be spared from the changeable weather that affected the recent Formula 1 race. If so, we’ll see another exciting DTM race.”

The schedule at the Nürburgring

Point standings after 7 of 10 rounds