Skip to content
We are using cookies for a better user experience.
06/21/21
Neuburg a. d. Donau
Sport 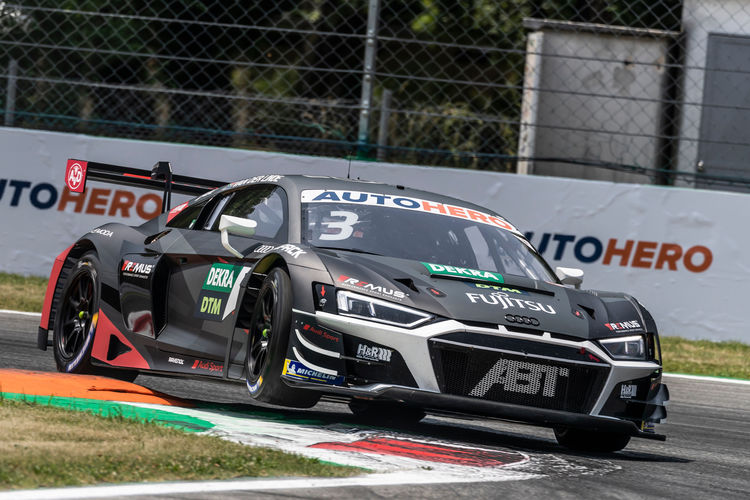 Strong one-two victory at the season opener at Monza: The DTM started into a new era with GT3 sports cars in Italy and Audi is among the winners with the R8 LMS from the very beginning. On his 25th birthday, Audi Sport driver Kelvin van der Linde was unbeatable on the high-speed circuit at Monza on race Sunday. Already in qualifying, the South African from Team ABT Sportsline proved his class with a best time in the Audi R8 LMS – the five brands in the top six positions were separated by just 0.248 seconds. On his fastest lap, van der Linde benefited, among other things, from a slipstream that brand colleague Nico Müller from Team Rosberg had given him. In the race, a key situation arose in the first turn: Van der Linde defended first place against Saturday’s winner Liam Lawson and thus maintained his advantage on a high-speed track on which overtaking is extremely difficult for the Audi drivers. Subsequently, the DTM rookie was in full control of the action for 50 race minutes, won by 3.3 seconds and took the lead of the standings. Team Rosberg completed Audi Sport customer racing’s one-two victory. Nico Müller had started in fourth place and at the beginning found himself in a three-way battle with BMW driver Sheldon van der Linde and previous day’s winner Liam Lawson in the Ferrari. On the track he made up one position and thanks to an excellent pit stop by Team Rosberg he gained another position to finish second. While this was the first victory with the R8 LMS in this traditional racing series for Audi Sport customer racing at the beginning of the GT era in the DTM, the brand with the four rings has now increased its historic DTM overall tally to 131 victories since 1990.

Third place and lead of the standings at Zandvoort: Team WRT was the best Audi Sport customer racing squad at the second race weekend of the Fanatec GT World Challenge Powered by AWS. The two Audi Sport drivers Dries Vanthoor and Charles Weerts finished third in the second sprint race at Zandvoort despite several adversities. Vanthoor had qualified the Audi R8 LMS for the front row of the grid with the second-best lap time. In the scrum after the start, the Belgian dropped back to fifth place and handed over the car in fourth position at the mandatory pit stop. Charles Weerts was then in second place when he had to take a drive-through penalty because the car’s pace in the pit lane had been too high. In the end, third place was the best result of the eight Audi entries in the field. In the overall standings of the race series, which combines sprint and endurance races, Vanthoor/Weerts as leaders of the standings have an 8.5-point advantage in the drivers standings after four of ten events. Team WRT leads the team classification, with the closest of a total of 19 pursuers 14.5 points behind them.

Two trophies in Denmark: Valdemar Eriksen celebrated two podium results in the fourth round of the Danish Endurance Championship at Padborg. The privateer driver in the Audi R8 LMS won his class in the first one-hour race and finished second in the second race.

Lead in the standings extended: The Saintéloc Racing team has significantly increased its lead in the standings at the season’s halfway point in the GT4 European Series. Gregory Guilvert/Fabien Michal had secured the second grid position for each of the two races at the Zandvoort circuit in the Audi R8 LMS GT4. In Saturday’s race, which race control waved off behind the safety car after an accident, the two Frenchmen finished in second place and already scored their fourth class victory of the season in the Pro-Am classification. On Sunday, events repeated themselves: Michal/Guilvert were again second overall when, once again, an accident towards the end of the race forced a safety car period, meaning Michal was unable to fight for victory after a strong drive. Nevertheless, the team from Saint-Étienne in eastern France can be satisfied: In the Pro-Am standings, Guilvert/Michal have extended their lead by nine to 50 points at the halfway point of the season. In the Am classification of the most high-profile European GT4 racing series, Michael Blanchemain/Christophe Hamon from Team Fullmotorsport are two other Audi privateer drivers in the lead.

Success at Zwartkops: Marius Jackson recorded two podium successes in the South African G&H Transport Extreme Supercars race series. On the Zwartkops circuit, the privateer driver in the Audi R8 LMS GT4 won his class by 10.9 seconds in the first race. In the second race he finished third.

Great jubilation at the home race in the TCR Europe: Tom Coronel celebrated his first victory of the season in the Audi RS 3 LMS at his home race at Zandvoort on the third race weekend of the TCR Europe. The success of the Dutchman from Team Comtoyou Racing in Saturday’s race was as spectacular as it was unexpected. Having started in second place ahead of his Serbian teammate Dusan Borkovič, the veteran was initially overtaken by another colleague from the same team. Nicolas Baert in the Audi RS 3 LMS managed a strong start from position four that took him up to second place. As early as on the third lap, Coronel attacked his young Belgian teammate. Both Audi cars touched each other. When Coronel wanted to radio his pit box, he accidentally pressed the speed limit button instead of the radio button and thus dropped back even further behind Borkovič. Already on lap four, the Dutchman pushed past the Serb again, while Baert dropped back. So Coronel fought with Jack Young for the lead, which he snatched from the Briton on the eighth lap. In the end, Coronel won by 1.8 seconds while Borkovič secured another trophy for Jean-Michel Baert’s team in third place. After three of seven events, Audi privateer Tom Coronel has thus made up three positions in the championship fight. He is now equal on points with Frenchman Jimmy Clairet in third place. In the team classification, Comtoyou Racing is the second-best of ten teams while Nicolas Baert leads the junior classification.

First win of the season in Sweden: Tobias Brink clinched his first victory of the season on the second race weekend of the TCR Scandinavia. At the Skellefteå circuit, Brink in the Audi RS 3 LMS had started the rainy third race from third place and quickly overtook Volkswagen driver Mikael Karlsson. Brink as well as teammate Hannes Morin overtook VW driver Andreas Ahlberg, who had been leading until then. In the end, Brink won by 2.8 seconds, while Morin dropped back to third place behind Robert Dahlgren. After the first third of the season, Tobias Brink is the new runner-up in the standings behind Dahlgren.

Success in Russia: The Audi privateers clinched no less than three trophies with the RS 3 LMS at the second race weekend of the TCR Russia. On the NRing, Egor Orudzhev from the Lukoil Racing Team was the best Audi privateer in the first sprint. From fifth place, Orudzhev improved by two positions already in the first corner and held his position until the finish. In the second race, Dmitry Bragin managed a perfect start-finish victory. The Russian, who had already won the TCR Series in his home country in 2017 and 2018 with Audi and then switched to another make, returned to the four rings for the 2021 season. Bragin had started from pole position for Team Taif Motorsport and built up a lead of 1.8 seconds to the finish. As a result, he is now third in the standings. With Aydar Nuriev from the AG Team in third place, another Audi privateer driver was on the podium at Nizhny Novgorod.

Victory and second place in Estonia: At the second race weekend of the Baltic touring car racing series BaTCC at Parnu, Valters Zviedris clinched second place in the TCR class in the Audi RS 3 LMS in the first sprint race. The Latvian won the second race by 7.2 seconds. The second round of the Baltic racing series BEC6H was also held at the same venue. Team LV Racing from Latvia in the Audi RS 3 LMS was second best of seven TCR teams after six hours of racing with drivers Valters Zviedris/Anti Rantala/Ivars Ballers.

Two podium finishes in Denmark: Team Dan Agro Racing returns from the fourth round of the Danish Endurance Championship with two trophies. Stefan Lorenzen/Niels Nyboe won their class in the Audi RS 3 LMS with a two-lap lead in the first one-hour race at Padborg. In the second race, the two Danes finished third.

Two third-place finishes in Italy: At the third round of the Coppa Italia Turismo at Misano, two Audi customer teams achieved a podium finish each. Carlotta Fedeli was third in the first race for RC Motorsport in the Audi RS 3 LMS, while Steven Giacon climbed onto the podium in third place after the second sprint.