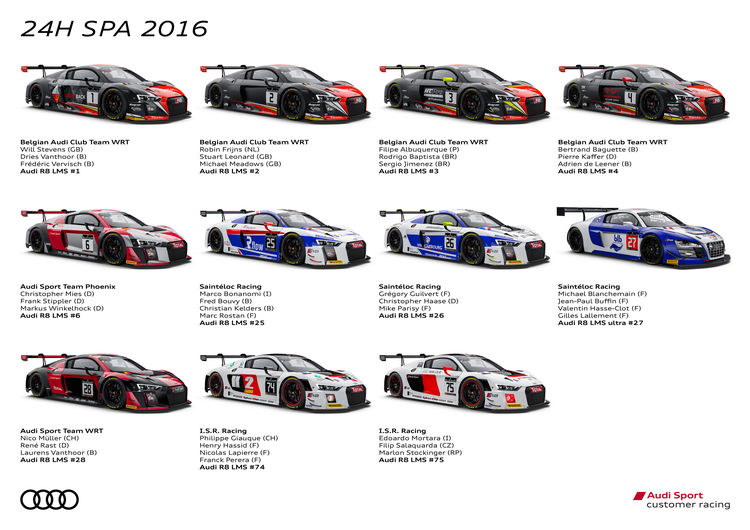 The 24 Hours of Spa is the major iconic event on the international GT3 racing calendar. This year, the race will be held from 30 to 31 July. Audi is now going to meet with fierce competition again and is represented by more customer racing teams than ever before. The brand with the four rings has won three of the past five editions and clinched the ‘Coupe du Roi’ manufacturers’ cup in 2014 and 2015.

The origins of the race date back to 1924, since 1964, it has been held regularly and today it is the endurance race with the largest number of GT3 race cars in the world. “65 race cars from eleven marques on a track which is an absolute dream. This is a first-class challenge,” says Chris Reinke, Head of Audi Sport customer racing. “For the many Audi fans in Belgium, the worldwide GT community as well as our customer teams and the drivers, the 24 Hours of Spa is again the season’s pinnacle event this year.” Four teams will be fielding a total of eleven Audi GT3 race cars and 36 drivers will be taking turns in the cockpits.

As well as the Spa winners René Rast (D), Frank Stippler (D), Markus Winkelhock (D) and Laurens Vanthoor (B) the DTM drivers Nico Müller (CH) and Edoardo Mortara (I) are among them. Other drivers with professional experience include the long-standing Audi campaigners Filipe Albuquerque (P) and Marco Bonanomi (I), the former champions from the Blancpain Endurance Series Christopher Mies (D) and Christopher Haase (D), Blancpain GT title defender Robin Frijns (NL) and former DTM driver Pierre Kaffer (D). The driver line-up is complemented by an international mix of customer drivers. This underscores the race’s character: the Audi R8 LMS is equally popular with pros and amateurs.

The four race teams have been using Audi race cars for years. Belgian Audi Club Team WRT will be contesting its home round with five race cars in total, Audi Sport Team Phoenix will be competing with one Audi R8 LMS. Both squads have previously won the race at Spa. Team I.S.R. Racing from the Czech Republic is fielding two Audi R8 LMS cars and Saintéloc Racing from France is traveling to the Ardennes with three race cars.

While the actual race result after 24 hours is the most prestigious one, there are two important additional classifications. Firstly, for many years the 24 Hours of Spa has been part of the European Blancpain GT Series. At Spa, points are awarded after six, twelve and 24 hours of racing – this results in nearly twice as many points as in the case of the usual race duration. Secondly, for the first time regular entrants can score points for the Intercontinental GT Challenge as well. Currently, Laurens Vanthoor and Markus Winkelhock are ranked in third place of this classification of three major international GT races – the Bathurst 12 Hour (Australia), the 24 Hours of Spa and the Sepang 12 Hours (Malaysia).

On the fringe of the Spa 24 hours, Audi Sport customer racing will be handing over the 200th R8 LMS to a customer as well. Since 2009, GT3 racing has been a mainstay of Audi’s motorsport program. By now, teams in Europe, Asia, Australia, South and North America are using the two generations of the production-based GT sports car with the four rings.

The Audi teams in the 24 Hours of Spa