Ekström shines at the DTM in Spielberg 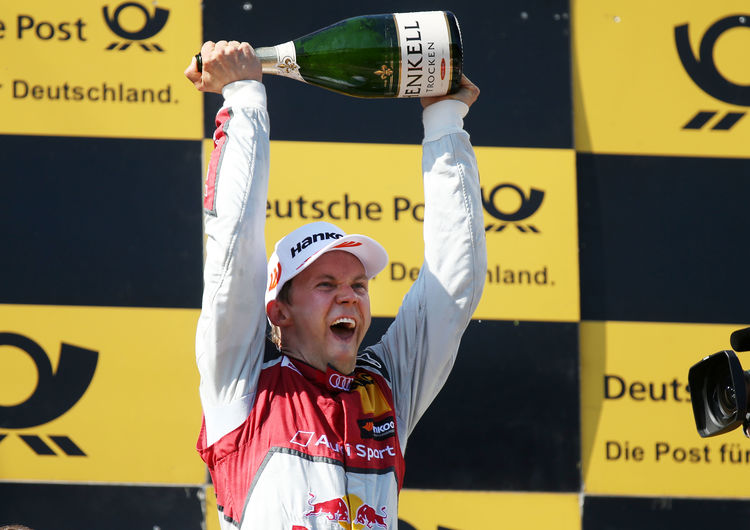 The Red Bull Ring lent Mattias Ekström wings once again: after his convincing victory in the rain last year, he shone in Spielberg this time around in the scorching heat. In the second race on Sunday, the Swede drove impressively from eleventh on the grid to second at the wheel of the Red Bull Audi RS 5 DTM from Audi Sport Team Abt Sportsline. Thanks to Jamie Green a second Audi driver mounted the podium.

For Ekström, the dream of a podium finish at one of his favorite tracks appeared just that after qualifying. On his fastest lap, the Audi driver was blocked by a competitor who was demoted five grid positions as a result. However, for Ekström the disadvantage was even bigger: instead of starting the race from one of the two front rows, he started from eleventh.

All the more remarkable was the comeback drive of the most experienced and successful active DTM driver: the Swede overtook several competitors, drove a long opening stint and returned to the track in third place after making his tire stop on lap 29. Nine laps later, he also overtook Jamie Green and crossed the finish line in second place to the cheers of the enthusiastic fans.

“Sometimes second place can feel like a win,” said Mattias Ekström after his comeback drive. “Today is such a day. The race was mega. Just a shame that we weren’t so good in qualifying here, otherwise a dream weekend with my friends from Red Bull could have been possible. Even so, it was fantastic racing today and I’m delighted for my team that worked so hard after the accident at the start yesterday in order to prepare the car perfectly again for me.”

The maiden podium finish of the season was also a relief for Jamie Green. After last year’s championship runner-up had not scored any points in the first three races, he put the Hoffmann Group Audi RS 5 DTM of Audi Sport Team Rosberg on pole position by two thousandths of second on Sunday. For the Briton it was the tenth pole position of his DTM career, which he was initially able to convert at the start. On the second lap, he dropped behind the later winner Timo Glock in a BMW, six laps before the end of the race behind Mattias Ekström. Despite this, the Briton was delighted about his first podium result at the Red Bull Ring.

Nico Müller (Playboy Audi RS 5 DTM) and Edoardo Mortara (Castrol EDGE Audi RS 5 DTM) did not see the checkered flag. Müller was touched at the back by Mercedes-Benz driver Robert Wickens on the second lap and landed in the same gravel bed as his team mate Edoardo Mortara did 22 laps later. The Italian moved up from fifth to third in the early stages of the race and had a good chance of claiming the championship lead. However, Mortara retired early following a collision with BMW driver António Félix da Costa. The Italian nevertheless remains second in the overall rankings and travels to the Lausitzring (June 4–5) only three points behind championship leader Paul Di Resta.

“The comeback drive from Mattias (Ekström) was of course excellent and Jamie (Green) also showed excellent form today,” said Dieter Gass, Head of DTM at Audi Sport. “It’s great that the two bounced back today after the difficult start to the season. When you consider Mattias’ race, it’s even more annoying that he was held up in qualifying, because otherwise he would definitely have been a potential winner today. Edo’s (Mortara) retiring is of course also bitter.”