{{ activeItem() }}
Twitter
10/16/21
#Indy8H: Pre-Qualifying results overall: P4 Audi Sport Team WRT #37 P8 Audi Sport Team WRT #32 P9 Audi Sport Team… https://t.co/7k3Uux6lxC
10/16/21
1-2 victory for Team X Works: Riokonig (Audi R8 LMS #71) won the second GT Super Sprint Challenge race at Zhuhai, f… https://t.co/tKcx1LaEdR
10/16/21
Pre-Qualifying is up first on the schedule at the @IMS this morning. The 90-minute session gets underway at 08:30 l… https://t.co/NMbHlCD9Hl
10/16/21
Good morning from the @IMS. The grid for the 2021 @indy8hour will be set today. &gt;&gt; https://t.co/lBfInMa54I… https://t.co/e7k0Z0jKmH
Audi Sport on Twitter
{{ activeItem() }}
Facebook
10/16/21
In episode one, experience decades of quattro as Audi DTM racing driver Nico Mueller and legendary Rally World Champion and quattro driver Stig Blomqvist drive on the famous Col de Turini and discuss the evolution of Audi quattro. Stay tuned for episode two. #Audi #quattroMoments -------------------- Audi RS e-tron GT: Power consumption combined: 20.2-19.3 kWh/100km (NEDC); 22.5-20.6 kWh/100km (WLTP); CO2 emissions combined: 0 g/km. Information on fuel/electricity consumption and CO2 emissions in ranges depending on the equipment and accessories of the car. Further information: www.audi.com/dat
10/16/21
Downtown in Indianapolis. 🇺🇸 The 8-hour Intercontinental GT Challenge race is coming up on Sunday. >> audi.com/GT3 #PerformanceIsAnAttitude #Indy8H
10/14/21
Up to the challenge. These are the driver crews who will take on the desert in the Audi RS Q e-tron*. Bringing a lot of experience to each cockpit, they are ready to make history and redefine intelligent performance. Watch the full film >> we.audi/bts-rtd-2 #FutureIsAnAttitude #RSQe-tron #RoadToDakar #Dakar2022 -------------------- *This vehicle shown here is the Rally Dakar vehicle that is not available as a production model.
10/14/21
Looking back on the 2021 DTM season – the first of the GT3 era and with the Audi R8 LMS. >> audi.com/GT3 #PerformanceIsAnAttitude
Audi Sport on Facebook 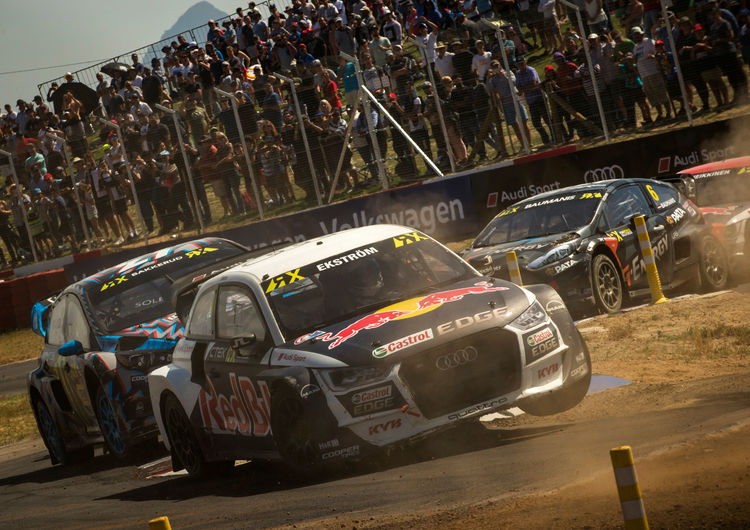 Audi remains committed to rallycross in the 2018 season. The Ingolstadt-based brand will continue to provide factory support to Mattias Ekström’s project. Under its new name, EKS Audi Sport, the team will compete in the FIA World Rallycross Championship (World RX) with two newly prepared Audi S1 EKS RX quattro cars. Andreas Bakkerud, one of the most successful rallycross campaigners, is joining team principal and driver Ekström on the grid in the second car.

Looking at the new season, long-standing Audi factory driver Mattias Ekström is full of zest for action: “With support from Audi we’re able to go for all-out attack,” says the Swede. “Our aim for 2018 is clear: We’re battling for the drivers’ and teams’ world championship titles.” In the 2016 season, EKS had been successful in the Audi S1 EKS RX quattro, having clinched both titles. Last year, Ekström had to settle for finishing the World RX season as runner-up. EKS placed third in the teams’ championship. “It was clear that we needed to make some changes. That’s why we’re preparing two new cars and putting the competition from Volkswagen and Peugeot in their place.”

Norwegian Andreas Bakkerud is joining Ekström in the battle for trophies and titles. The 26-year-old ranks among the world’s best rallycross drivers. He has contested all 49 rounds in World RX history, claiming 18 podium finishes and six race wins. In the 2016 season, he placed third in the drivers’ championship – trailing Ekström and the reigning World RX Champion Johan Kristoffersson. “It’s a great honor for me to be driving in Mattias’ team. We’ve had good rapport with each other for many years and I’ve been closely following the development of EKS. Together with the team I’d now like to make the next step in my career and be in contention for the title.”

Head of Audi Motorsport Dieter Gass is delighted about the continuation of the commitment as well: “We gathered very positive experiences in the World RX last year and are convinced of the series’ growth potential. In the medium run, we hope to see electric cars being fielded in this racing series because electrification is a focus topic at Audi also in motorsport.”