DTM stars love the Audi A5 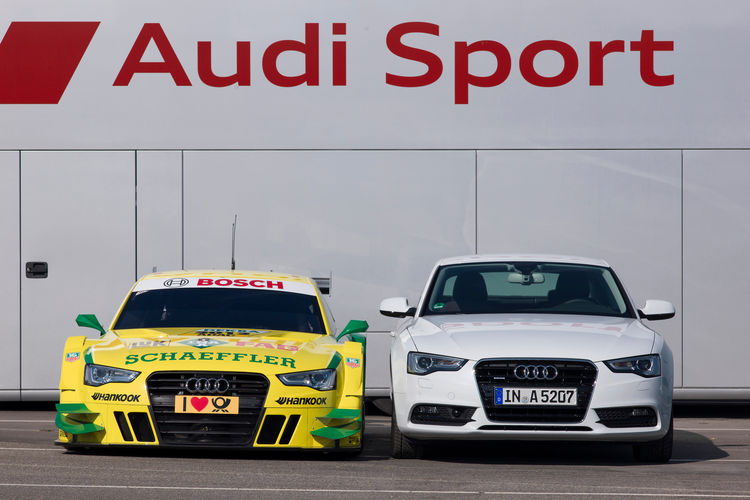 When at 2 p.m. on April 29 the first race of the 2012 DTM starts at the Hockenheimring (live on “Das Erste”) it will not only mark the beginning of a new era for the world’s most popular international touring car series. For the first time ever, Audi is banking on a factory-fielded coupe in the DTM. The sporty-elegant A5 serves as the base for the race car.

In 1990, Audi made its debut in the DTM. The large, four-door sedan was not an optimum base for use in racing though. Thanks to a V8 engine and superior quattro drive Audi won two consecutive titles nonetheless – as the first ever automobile manufacturer to do so in DTM history. And on its return to the touring car series with the more compact A4 Audi again shaped DTM history, from 2004 onward. In 2007, 2008 and 2009, the brand with the four rings was the first – and has so far been the only – manufacturer to achieve the title hat-trick in the DTM.

A total of five championship titles make the A4 DTM one of the most successful race cars ever built by Audi. Yet its successor, the new A5 DTM, lets any sentimental thoughts pass quickly. “For me, the A5 is the most beautiful of the three new DTM vehicles,” says Head of Audi Motorsport Dr. Wolfgang Ullrich. “And in terms of providing the base for it the A5 is a very good car for the DTM.”

The enthusiasm for the coupe is shared by Michael Dick, who in his role as Member of the Board of Management for Technical Development is responsible for AUDI AG’s DTM commitment as well. “I particularly like the fact that the contours of the production A5 can still be clearly recognized,” praises the technologist who has personally done some trial laps in the new DTM vehicle. “I was positively surprised by the great sense of space in the A5 DTM. I immediately felt comfortable – even more so than in the A4 DTM, which I had the chance to drive in the past as well.”

“This shows that we did a good job with the coupe,” says Dr. Ullrich, pleased with the praise from his boss. “Actually, you’d expect the sense of space to be better in a sedan.”

The unique feeling of space is also one of the strengths of the production A5 that immediately won the hearts and minds of Audi customers after its market launch in 2007. The A5 DTM is based on the current version, which since the most recent product upgrade in summer 2011 can be recognized by its distinctive, wedge-shaped headlights.

The new A5 DTM is thus spearheading the A5 family – although it is currently reserved exclusively to the company’s racers. Yet the production models, as well, fulfill nearly any wish.  Whether as an A5, S5 or RS 5 – coupe, sportback or cabriolet – a total of seven models are available to choose from. The modern engine range spans from the particularly economical 2.0 TDI with 105 kW (143 HP) to the high-performance V8 with 331 kW (450 HP) used in the exceptionally sporty RS 5 coupe.

The DTM stars competing for Audi in the 2012 season are A5 fans too. The two-time DTM Champion Timo Scheider was one of the first to place an order for the upgraded RS 5 – in white. The MMI navigation system is the most important accessory for the German who lives in Austria. “This makes traveling a totally relaxing experience,” he says.

DTM rookie Adrien Tambay has ordered an RS 5 as well – in Daytona gray and fitted with 20-inch wheels. “My absolute dream car,” raves the Frenchman.

Mattias Ekström is another driver who could very well picture the new RS 5, which he just had the chance to test, in his private garage. “But I’d definitely need an ISOFIX system for the front passenger’s seat,” says the two-time DTM Champion with a grin. “My son Mats always wants to sit in the front seat next to Daddy.”

Edo Mortara already drove an RS 5 in his 2011 rookie season whereas his driver colleagues Filipe Albuquerque and Miguel Molina prefer Audi TDI Power. Molina’s current A5 is equipped with a 2.0 TDI engine and Albuquerque has just ordered a black A5 3.0 TDI with matte-gray 19-inch wheels. “That simply perfects the A5’s fantastic design,” the Portuguese enthuses about his car.

For their new company cars on the race track, there are no extras though – as Audi Sport has installed them all as standard equipment. “The A5 DTM not only looks good but our guys have turned the A5 into a really good race car too,” Head of Audi Motorsport Dr. Wolfgang Ullrich is convinced. “My hopes for the A5 DTM are to have a good race car in my hands that is in contention for victory right from the first race on and that will perfectly blend with the successful and elegant A5 family.”

The first hour of truth for Audi Sport’s youngest baby will come in qualifying for the DTM season opener at Hockenheim on April 28 and a day later at the new DTM’s eagerly awaited first race. Plus, a particularly large number of A5 models are likely to be found in the parking lots around the Hockenheimring this time.

Tickets for the 2012 DTM are available on the internet at www.audi.de/dtm.