DTM stars at wheel of the Audi R8 LMS 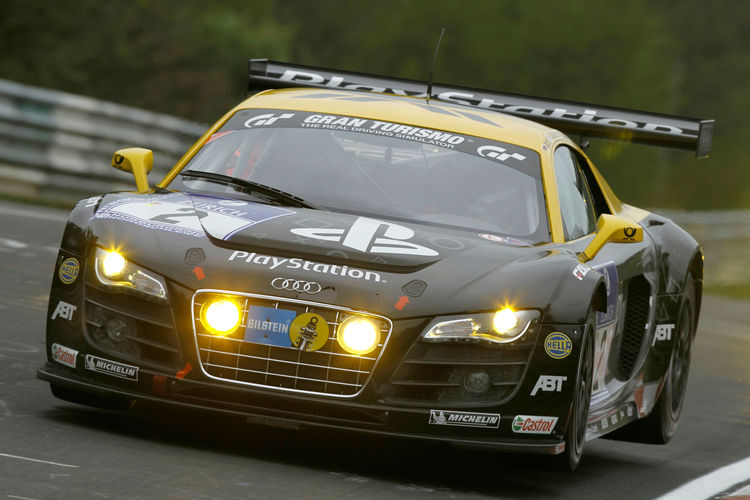 ABT Sportsline and Phoenix Racing each field a brace of Audi R8 LMS at the legendary Nürburgring-Nordschleife. After gaining valuable experience over the last two years at the 24-hour race around the Nürburgring with the quattro GmbH GT3 sports car the two teams now receive full factory support from Ingolstadt and Neckarsulm.

All four cars have first rate driver teams: competing for ABT Sportsline are Mattias Ekström, Timo Scheider and Marco Werner as well as Christer Jöns, Luca Ludwig and Christopher Mies. Christian Abt is nominated as support for both cars entered by the DTM championship winning team from the years 2002, 2004, 2007, 2008 and 2009. Frank Stippler assumes the “dual role” for Phoenix Racing. He supports Marc Basseng, Marcel Fässler and Mike Rockenfeller and also Christopher Haase, Marc Hennerici and Markus Winkelhock.

“The Audi R8 LMS was developed specifically for customer sport,” explains Head of Audi Motorsport Dr. Wolfgang Ullrich. “With the two factory supported events at the Nürburgring and at Spa-Francorchamps we aim to underline the positive image that the R8 LMS has built up following its first two years of competition. I think we are well positioned for this from the driver and team side.”

The quattro GmbH, under the direction of Werner Frowein and Romolo Liebchen, took over marketing and further development of the GT3 sports car from 2011. A further improved version of the Audi R8 LMS celebrated its debut at the beginning of February with a one-two finish in the 12-hour race at Bathurst (Australia).

Among other features, the 2011 Audi R8 LMS is equipped with a modified engine control for the 5.2 liter V10 power unit, modified suspension and a light-weight motorsport clutch specifically developed for endurance races.

“The 2011 season started perfectly for the Audi R8 LMS with the one-two finish at Bathurst,” says Werner Frowein, Managing Director of the quattro GmbH. “We want to continue this. In the shape of Phoenix Racing we send a team to compete that has accompanied the development of the R8 LMS for endurance races since the very beginning and which has gathered the most experience in this area. ABT Sportsline is the perfect choice for the Nürburgring, and WRT for Spa. As far as the drivers are concerned you could hardly wish for better.”

ABT Sportsline and Phoenix Racing contest rounds of the VLN endurance championship in preparation for the 24-hour race at the Nürburgring. WRT contests the Blancpain Endurance Series in 2011 which also includes the 24-hour race at Spa-Francorchamps.


The Audi teams contesting the 24-hour race at the Nürburgring

The Audi teams contesting the 24-hour race at Spa-Francorchamps