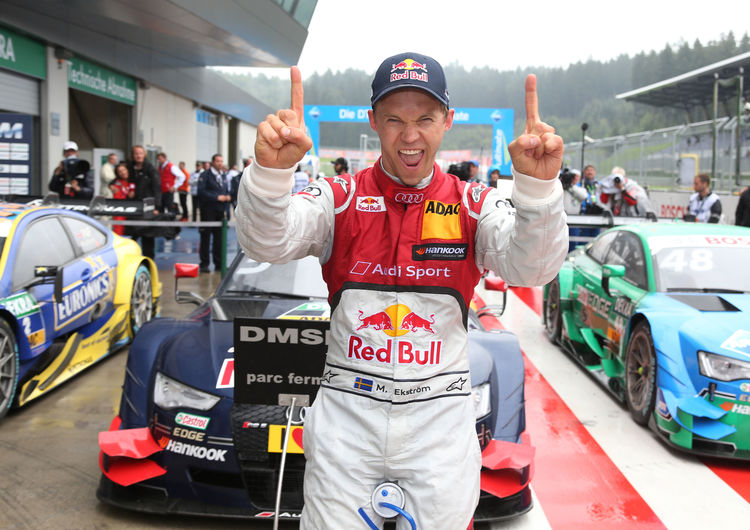 Edoardo Mortara and Mattias Ekström won the two DTM races at the Red Bull Ring for Audi. Timo Scheider was excluded from the classification of the second race after a collision with Mercedes driver Robert Wickens. Quotes after the Austrian round of the DTM.

“Of course I can understand the excitement among the motorsport fans. On TV, it really came across as if we’d instructed Timo (Scheider) to push a rival off track. But that was definitely not the case. I’m sorry that in the initial emotion at the command post I shouted ‘Timo, push him out.’ I do not communicate by radio with the drivers during the race and didn’t know that the radio was open. This was not an instruction for Timo by any means. I can only apologize for this remark. An expression like this does not reflect my idea of motorsport, but was strictly due to the adrenaline at that moment. I’m a racer and was fuming about the way Timo was dealt with. We’ve frequently seen such games in the DTM before. It was also definitely not Timo’s intent to push another driver off track. What pleased me this weekend was the strong performance by the whole squad. Mattias (Ekström) showed a fantastic recovery on Saturday and was in a class of his own on Sunday in the rain. He deserves being the leader of the standings and would be in that position even if Pascal Wehrlein had finished in sixth place. Edoardo Mortara showed a tremendous performance at Spielberg too. All in all, we can be very pleased with our results. It’s a shame that in view of the events on the last lap on Sunday this has taken a back seat.”

“I scored 40 out of 50 possible points here at Spielberg. It could have hardly gone any better than this. My dream of the weekend was to drive back into the battle for the title with good performances – and I managed to do that. Another dream will be coming true for me the next few days when I’ll be a passenger in an aerobatics plane for a PR event. For me as a fan of somewhat extreme activities, this will no doubt be a great experience.”

“Many people have been congratulating me on a perfect weekend – but something like that no longer exists in the DTM with the new format, because the competitiveness is simply too great. If you score good points on Saturday and Sunday you can be highly pleased. That’s exactly what I managed to do at Spielberg, so I’m perfectly happy. The lead of the championship is nice but doesn’t mean anything. We’re still a long way from clinching the title. I think that in the end it won’t be the victories that will count, but how good the bad races of us guys at the front will be. The next challenge is waiting for us at Moscow in a few weeks from now. At that time, I’ll not only be the oldest and heaviest driver in the DTM but will also have the heaviest car in the whole field.”

“The weekend was okay. Looking at how strong Audi was this weekend, you have to say that more was possible. But then, clinching positions eight and four in a highly competitive series like the DTM, isn’t so bad either. I think we’re on the right track. Compliments also to the fans at Spielberg: this is where motorsport is still being lived. You can feel that as a driver and that’s why I always like to come back to the Red Bull Ring.”

“My Spielberg assessment is positive. Saturday could have been better. As far as that goes, we need to work on our qualifying performance. That made Sunday particularly positive. Advancing from eleven to five in difficult conditions like these – I’m very happy with that. I don’t mind taking the ten points with me into the summer break.”

“One point for the weekend is obviously not what we’d been hoping for. Still, we weren’t so bad in terms of lap times. On Saturday, in tenth place, we made the best of our starting position. Besides that, I had a few nice duels. In the difficult conditions on Sunday even a result in the top six would have been possible, but a few slips cost important points. Before the race at Moscow, I’m going to relax in Southern France for a few days.”

“A strong weekend for Audi and our team. Congratulations to Edo (Mortara) and Mattias (Ekström). Personally, I now have to quickly get past the races at Spielberg and look ahead. After taking a breather, we’re going to attack again at Moscow. Clearly, the fans can look forward to a thrilling second half of the season.”

“After a difficult Saturday, we had a decent speed on Sunday in the rain and I was in the points. Towards the end, two Mercedes drivers attacked me hard and overtook me. I braked on entering the next turn, as always, but the car in front of me apparently didn’t, so I caught him. That both cars slipped off track afterwards was certainly not my intention. I’m very sorry for Robert (Wickens) and Pascal (Wehrlein). I know exactly how you feel in a situation like that. I have to accept the exclusion from the classification.”

“On Saturday, I had the speed on a dry track. Following position two in qualifying, I was leading the race until my early transmission issues. On Sunday, the conditions were totally different. It was wet all day. And that’s when we were simply not fast enough. I can do better than that as a driver, which I proved in similar conditions last year. We need to check where we can improve in that respect. But I’m looking ahead. In the next few days, I’m going to take a German course in Ingolstadt. On Thursday, there’ll be a barbecue at Rosberg, after that I’m going to take some time off with the family, and then we’re going to attack again in Moscow.”

“It was a rather unfortunate weekend. After Jamie’s retirement as the leader on Saturday, he wasn’t able to cope with the wet track on Sunday at all. We know that he can do much better than that and now have to analyze what the problem was. But it’s possible that now we’ve missed the boat for the championship. The only bright spot was the tremendous drive by Nico (Müller), who from eleventh place on the grid sensationally advanced to position five in these difficult conditions.”

“We’re going to pin this weekend on our wall: two pole positions, two victories, two fastest race laps and, as the icing on the cake, the two quickest pit stops of the weekend are a strong performance by the whole squad. This goes for our drivers as well as for all engineers and mechanics who, in spite of difficult conditions on Sunday, always kept their cool. Mattias (Ekström) and Edo (Mortara) are leading the standings and are in contention for the title – the perfect motivation boost for continuing to attack in the second half of the season. The fans can look forward to thrilling weekends.”

“After Zandvoort, Audi has come back with a strong performance at Spielberg. It’s a shame that our team didn’t make it onto the podium. But with ‘Rocky’ we didn’t have the optimum inflation pressure, so he wasn’t able to keep pace with the front runners. But position four is a bright spot. Timo (Scheider) would have deserved scoring points as well. We’re sorry that in the three-way battle that was fiercely fought by all three drivers involved two Mercedes ended up retiring on the last lap. We accept Timo’s exclusion from the classification. On the whole, we’ve got to say that the first half of the season definitely didn’t go according to our team’s expectations. That’s why I’m happy that now we’ve got a longer break before Moscow, which we’re going to use to recalibrate ourselves and to then attack again.”