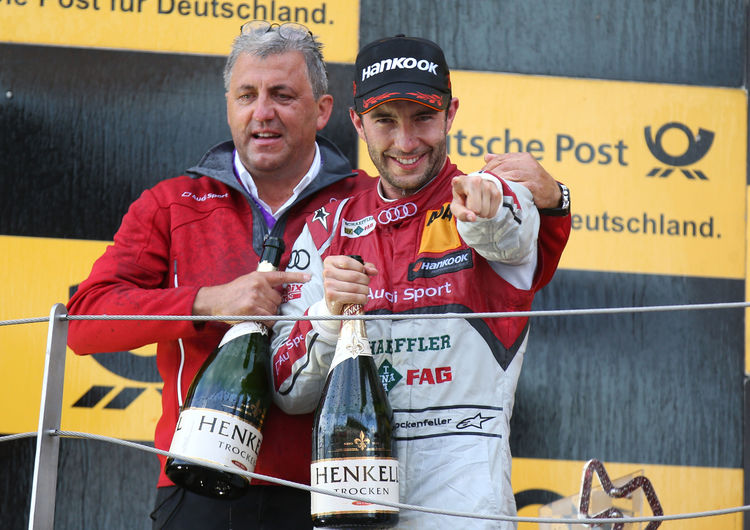 Audi driver Mike Rockenfeller is convinced of having good chances of success in the DTM at the Nürburgring (Saturday and Sunday live on ‘Das Erste’) this weekend.

“My aim is to be in contention at the very front and win,” said the 2013 DTM Champion during an Audi telephone press conference on Wednesday. “We were able to unload weight and are going to meet with Mercedes on an equal footing again this weekend. The track on the Nürburgring suits me well and I’ve always scored good results there – including last year when I finished as the runner-up and was the best Audi driver. We’re going to start the weekend with a set-up similar to the one at Moscow – and that’s where I won.”

For Rockenfeller and his Audi Sport Team Phoenix the event in the Eifel is a ‘home round.’ “This is definitely special,” says Rockenfeller. “But there’s no home advantage in motorsport. A large number of fans, friends and family will be there. Aside from that, I’m going to tackle the weekend like any other one. In the title race, Mattias (Ekström) will benefit most by as many Audi cars as possible being among the front runners – and I’d like to be at the very front.”

The fact that this time there will be no free practice before the first qualifying session on Saturday is a special aspect. “That’ll be interesting,” Rockenfeller believes. “You start your first timed lap on a new set of tires without having driven a single meter on the same day. I’m eager to see what that’ll feel like.”

Between the DTM races at Oschersleben and the Nürburgring, ‘Rocky’ took a side trip to the Frankfurt Motor Show. “There, I was particularly impressed by how enthusiastic people are about cars. Seeing the new Audi A4 live for the first time and also test driving it in the city was exciting. Obviously, I signed a lot of autographs as well.”