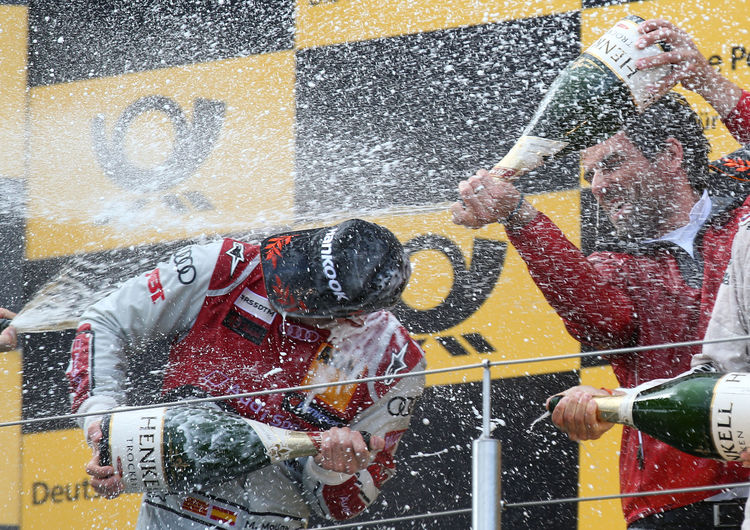 Miguel Molina’s first DTM victory not only pleased the Catalonian. Quotes from the Audi camp following the two DTM races at the Nürburgring.

Dr. Wolfgang Ullrich (Head of Audi Motorsport)
“Audi has won every other DTM race so far this season, celebrating as many victories as BMW and Mercedes-Benz combined. Obviously, it’s disappointing to see that our chances in the Championship before the finale at Hockenheim are now only minimal. But two of our drivers can still win the title and at Hockenheim we’re going to battle up to the very end. The races at the Nürburgring were spectacular and fiercely fought – not only in the DTM, but also in the Audi Sport TT Cup. The fans can already look forward to a great final weekend.”

Dieter Gass (Head of DTM at Audi Sport)
“Our highlight of the weekend was the superb performance by Miguel (Molina) on Sunday: pole position, fastest race lap and a commanding victory with a 7.5-second advantage – that’s something you very rarely see in the DTM. His first victory was more than overdue. He repeatedly indicated his potential and even clinched the top spot on the grid five times, but then was unfortunate in the races again and again – finally, that wasn’t the case here. Edo’s (Mortara) second place on Saturday was top as well, especially as he had started from fifth place on the grid. With a view towards the Championship, the way the weekend went was obviously anything but optimal. Especially in qualifying, our performance was not as solid as we’d have needed it to be here.”

Miguel Molina (Teufel Audi RS 5 DTM #17) retirement / position 1
“Today I’m just happy. I’ve been waiting for this day for a long time and never gave up despite many setbacks. But this success is also a victory of all the people that believed in me: Audi, my team, my family and many supporters. Obviously, I’m hoping that this was just a start to be followed by many more happy moments in my DTM career.”

Edoardo Mortara (Castrol EDGE Audi RS 5 DTM #48) position 2 / retirement
“A weekend with highs and lows. On Saturday, I was the best Audi driver in qualifying and in position two made up ground in the Championship. I enjoyed the race, had many nice duels and lots of fun. On Sunday, it was unfortunately the exact opposite with a poor qualifying session and retirement following an attack by the competition which, in my view, was unnecessary and punished accordingly. Obviously, looking at the table isn’t a real pleasure. But on the other hand, we also saw at the Nürburgring how quickly the tables can turn. So why not again at Hockenheim?”

Mike Rockenfeller (Schaeffler Audi RS 5 DTM #99) position 11 / position 7
“Miguel (Molina) showed what was possible with the Audi RS 5 DTM at the Nürburgring. Congratulations to him on his first victory. For me, a fifth place was possible on Saturday. Unfortunately, the tussle with Maximilian Götz put a spoke in my wheel. On Sunday, I recovered from twelfth to seventh place which, basically, isn’t that bad – but when you race with the intention of battling for podium places and victories, it’s definitely not a dream result either. Now, we’re hoping for a positive ending of the season at Hockenheim.”

Jamie Green (Hoffmann Group Audi RS 5 DTM #53) retirement / position 8
“On Saturday, I had a solid qualifying and was thrown out of the race early due to an accident that was not my fault. On Sunday, my qualifying with grid position three was even better. That’s extremely important in the DTM. But unfortunately, I was again unable to convert this into a good result. This time, problems with the parking brake frustrated my start. As a result, I dropped to the end of the field and, to top it off, damaged the front winglets of my car. That additionally impaired my race. All in all, a very frustrating weekend. Now, I’m hoping for the season to end the way it started: with a victory at Hockenheim.”

Mattias Ekström (Red Bull Audi RS 5 DTM #5) position 10 / position 11
“Congratulations to Miguel (Molina)! He’s a great guy, a quick racer and more than deserves his first victory. As far as I’m concerned, I lost my weekend twice in qualifying. On Saturday, I quickly recovered a few places but was battling with dull weapons following a few tussles. On Sunday, I recovered from position 17 to eleven within just a few turns. Afterwards, I needed a lot of energy and tire substance for the positions I unfortunately lost again during the pit stop stage. There’s no need to sugarcoat anything: this was a messed up weekend at exactly the wrong time. But everyone who knows me knows: I’ll only express congratulations on Sunday night at Hockenheim.”

Adrien Tambay (Playboy Audi RS 5 DTM #27) position 14 / position 12
“Here at the Nürburgring, we again failed to get back to a decent performance in qualifying. But I won’t give up. I can’t say anything negative about the two races – at least my Audi didn’t get a single scratch. Before the finale, we’re going to take a close look at the data and analyze and tackle every detail. I definitely wouldn’t want to end the season the way I finished here.”

Nico Müller (Audi Financial Services Audi RS 5 DTM #51) position 16 / position 16
“First of all, huge congratulations to Miguel (Molina). The first victory in a series is always special. I’m happy for him. Unfortunately, my weekend wasn’t so good. The best thing I can say about it is the fact that, following my two most recent retirements, I finally finished twice. But it was a far cry from the positions I’d be wishing for. In contrast to my previous starts, I didn’t do a good job of moving off the grid at all. Obviously, that doesn’t help when you start the race from position 21. Afterwards, my pace was good, and so was the strategy. I was in position 13 when Christian Vietoris forced me off track which cost me four or five positions. That I ultimately recovered to position 16 doesn’t really diminish my disappointment.”

Timo Scheider (AUTO TEST Audi RS 5 DTM #10) retirement / retirement
“We had quite a few plans for Phoenix Racing’s home round. But things weren’t going well as early as on Saturday: neither in qualifying nor in the race with the collision I wasn’t at fault in. On Sunday, qualifying went better and I made up a few positions. Unfortunately, Robert Wickens sent me into the gravel trap I wasn’t able to get out of again. So, for me it’s been a pretty bad weekend. But at least Miguel (Molina) clinched his first DTM victory. I sincerely congratulate him on this.”

Arno Zensen (Team Director Audi Sport Team Rosberg)
“At least with Jamie Green our team was in contention at the very front this weekend. That makes the fact that an accident he wasn’t at fault in on Saturday and a technical issue on Sunday deprived us of possible podium successes even more frustrating. It’s great, though, that Miguel Molina was able to celebrate his first victory. It proves that the Audi RS 5 DTM was again capable of winning at the Nürburgring.”

Hans-Jürgen Abt (Team Director Audi Sport Team Abt Sportsline)
“In my view, the Sunday this weekend belongs strictly to Miguel Molina. Pole, victory and fastest lap – I’m incredibly happy for him and his whole squad that has always been giving everything for him. He’s not only a good racer, who often suffered misfortune in the past and kept serving the team, but a great person as well. Edo (Mortara) showed a really strong race and a great game on Saturday. Still, with a view towards the Championship standings we have to admit that at Hockenheim we’re going to need a bit of help from the god of racing – and we’d like to earn that with a strong showing.”

Ernst Moser (Team Director Audi Sport Team Phoenix)
“Miguel (Molina) was in a league of his own on Sunday. After so many years and a number of pole positions, he now finally clinched his first victory. Congratulations to him. Unfortunately, our first home victory at the Nürburgring wasn’t in the cards for us. Timo (Scheider) was out of the race early both times. That’s a shame for him. ‘Rocky’ had a good pace in both races, but qualifying is our main problem. We need to intensively work on that now so that we can close the season at Hockenheim with a good performance.”