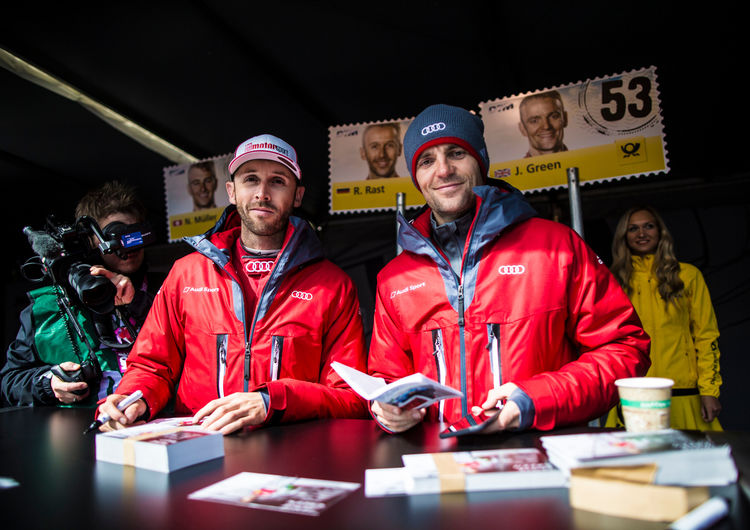 Following a DTM weekend at the Nürburgring that was difficult, as expected, Audi continues to lead all three championships. Quotes following races 13 and 14 of the season.

Dieter Gass (Head of Audi Motorsport)
“As expected, it was a difficult weekend for us. We knew that with the high additional weights we wouldn’t have any chance for victory on this track. According to our projections, 25 kilograms on a dry track would account for half a second per lap. And Jamie (Green) was lacking 0.550 seconds for pole position on Sunday. In the dry race on Sunday, we had unusual tire issues. We have to analyze if that was only due to the weight or if there were some other reasons as well. Mattias (Ekström) and Jamie extracted the maximum under these circumstances. It’s frustrating that on Saturday Mattias pitted for his tire change exactly at the wrong moment. That was really unfortunate. Otherwise he’d have a larger advantage now.”

Jamie Green (Hoffmann Group Audi RS 5 DTM #53) position 6 / position 7
“It was difficult! With the current performance weights it wasn’t easy to fight for one of the front positions in qualifying. We gave everything the whole weekend. With positions six and seven we achieved good results and scored some points in tough conditions. I’m satisfied with my performances and would like to thank Team Rosberg and Audi Sport for giving me such a good car.”

René Rast (AUTO BILD MOTORSPORT Audi RS 5 DTM #33) position 5 / position 12
“A rough weekend. On Saturday, in position five, we scored good points. On Sunday, I had a bad race. The pit stop, unfortunately, went wrong. I lost a lot of time and then chased the field. In the end, I came twelfth. But we knew that it would be difficult and I believe we made the best of it.”

Mattias Ekström (Red Bull Audi RS 5 DTM #5) position 15 / position 6
“My goal was to defend the lead of the standings. I achieved that although we were racing with plenty of weight as heavy as lead in our rucksack here and the weather god wasn’t on my side at all on Saturday. It was clear that on a dry track on Sunday we wouldn’t have any chance. That’s why eight points are a decent result, but a weekend like this doesn’t feel good.”

Nico Müller (Playboy Audi RS 5 DTM #51) position 11 / DNF
“We expected that this wouldn’t be an easy weekend. Still, we were hoping to score points. Going home without any now is pretty frustrating, especially after Saturday’s race in which I was fast in rain. This is the positive thing I can take home. The competition was simply stronger here in these conditions. We hope that we can change this again at Spielberg.”

Mike Rockenfeller (Schaeffler Audi RS 5 DTM #99) position 14 / position 17
“A race to forget. This was by far my worst weekend this season. The only positive thing is that my foot is still intact this time. We had changeable conditions and missed the mark with our setup in all conditions. On Sunday, my race was completely ruined by the tires. That’s never happened to me this year. We’re going to learn from this and look ahead to Spielberg.”

Loïc Duval (Castrol EDGE Audi RS 5 DTM #77) position 18 / position 15
“Honestly, this has been my toughest DTM weekend so far. We knew that due to the performance weights it wouldn’t be easy. We were also struggling with balance and grip. Due to the changing weather conditions, we didn’t have enough time to work on the setup. Our setup didn’t really work on either a wet or a dry track. That Mattias (Ekström) is still leading the championship is a positive. Now we have to work on extracting the best again from our beast on the last two weekends.”

Thomas Biermaier (Team Director Audi Sport Team Abt Sportsline)
“Obviously, it’s not pleasant to know in advance that you’re chanceless due to the weights. On a difficult weekend like this it’s important not to lose motivation. I can only thank every single member of the team for the fact that we continue to lead the standings with Mattias (Ekström). The eight points he clinched here in extremely difficult conditions may be decisive in the end. Following the race on Saturday, we were all in very low spirits. We discussed up and down what we could have done differently, but it was simply incredible misfortune. And Sunday showed once again that you should never give up because in the DTM nearly anything can happen.”

Ernst Moser (Team Director Audi Sport Team Phoenix)
“Having to take a licking like this on home soil is pretty painful. Both on Saturday in difficult conditions in the rain and on Sunday on a dry track we weren’t fast enough. On Saturday, we had no chance but to gamble and switch to slicks. On Sunday, we gambled again and pitted early with Rocky. But these tactics didn’t pan out. Why Loïc (Duval) wasn’t so fast this time is something we need to analyze. A positive: We again won the pit stop classification with Rocky’s car.”

Arno Zensen (Team Director Audi Sport Team Rosberg)
“We knew that it would be a difficult weekend. On Saturday, the team did a great job. We were in eleventh and last place and still advanced to positions five and six. Well done! Unfortunately, on Sunday, the pit stop with René (Rast) didn’t work the way it should have. Jamie (Green) drove a superb race. We still got off lightly.”