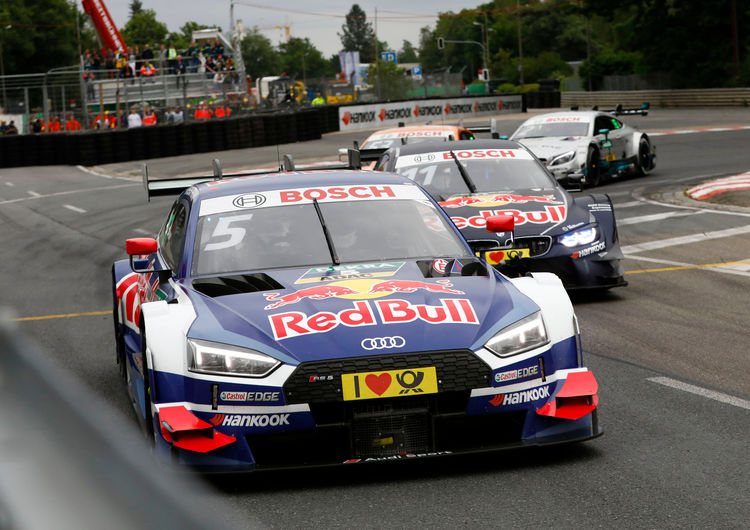 The spectators in Nuremberg witnessed a spectacular Norisring weekend. Audi defended its lead in all three DTM classifications, Mattias Ekström being the new DTM leader of the driver’s standings. Sunday’s race was overshadowed by a severe accident in which Mike Rockenfeller sustained an injury on his left foot. Quotes from the Audi camp.

“It’s been an exciting weekend with two spectacular races, a tremendous crowd on both days and narrow gaps which are typical for the Norisring. I think the fans really got their money’s worth. Mattias (Ekström) was a driver to reckon with once again at the Norisring. I’m very happy that we had him here. And for him, it paid off too: he’s the new leader of the DTM standings. We continue to lead the manufacturers’ and teams’ classifications as well, even though we didn’t score quite as many points as we possibly could have. Especially on Sunday, we had a lot of misfortune, but there are days like these in motorsport. People will be talking about the photo finish for third place with three cars side by side for a long time. Mike’s (Rockenfeller) injury is obviously weighing on us to some extent. We wish him a speedy recovery and are happy that nothing more serious happened to him and Gary (Paffett).”

“A good weekend with many points, lots of variety but, unfortunately, no victory. But now I’m the championship leader. Conditions in race one were very wet at first. When the track dried off I had to battle. I can’t complain about position three on Saturday. My race on Sunday was packed with variety. On my way to fourth, I swallowed a lot of dust. The start wasn’t so great, but then there was plenty of action up until the red flag. Afterwards, I was following the front runners, benefited from the battles in front of me and saw the podium in my mind’s eye. Unfortunately, there was a slight push from Marco Wittmann in the final turn, which caused me to drop to position four again.”

“This has been a tough weekend. We didn’t achieve good balance even in free practice. Our setup didn’t pay off and we were too slow. If you’re lacking just one or two tenths at the Norisring you’ll end up on the far rear of the grid. The practice and qualifying sessions were difficult, so the races were only about finishing. We managed that and scored a few points.”

“Actually, we were running well but, unfortunately, we clearly fell short of taking advantage of our pace. On Saturday, we could have done better than position nine, but the conditions were very difficult. On Sunday, from third on the grid, we’d set our sights on a podium finish, but then everything went wrong. I didn’t have a really good start and after the pit stop, I didn’t manage to warm up the tires and lost time. While trying to defend my position I flat-spotted a tire. Plus, I had contact with Bruno (Spengler) and after that, there was no chance anymore.”

“We only extracted two points from the Norisring, and they weren’t even scored in the race but in qualifying. We had the pace in both qualifying sessions. In the race on Saturday, I unfortunately drove across the yellow line at the pit lane exit otherwise a podium would have been possible. On Sunday, I didn’t manage to nail things down in qualifying. In the race, I had a collision with Robert Wickens. On the whole, not a good weekend.”

“The start to the second race was okay, and then things became turbulent. Our strategy wasn’t perfect, but we still need to discuss this. Then the accident with Gary (Paffett) happened. There was nothing I could do. I was already inside the turn. There was a huge impact. I’m happy that our cars are so safe. But, unfortunately, I have a midfoot fracture. Maybe it’s not so bad. I hope to be racing again in Moscow.”

“Even though there were a few positive moments this was definitely not a good weekend and I didn’t score any points. The race on Sunday was better than the round on Saturday. The track is very special. The last time I drove here was 13 years ago and it took me a while to get used to it again. Unfortunately, my last sector was never so good. Up until the safety car period, things were looking pretty well, even though there were a lot of laps left to drive. Unfortunately, you can never guess if and when there might be a yellow period. That’s why I had to pit when everybody else had already made their stops. That ruined my race. But, generally, my learning curve in the DTM is pointing upwards.”

“We were the strongest Audi team this weekend, mainly thanks to Mattias (Ekström). He’s simply an old fox and always incredibly fast and clever at the Norisring. On Sunday, he could have clinched pole position. Unfortunately, after his best time in the first run, he had to stop for weighing, so on his second outing he had fewer laps than he would have needed to optimally get his tires to work. But he drove a clean race on Sunday too. Marco Wittmann on the other hand arguably wanted to force a podium finish in his home race. That he’ll be starting in Moscow with a five-place grid penalty is only small consolation for the lost podium. For Nico (Müller), unfortunately, it was a very disappointing weekend. We’re going to jointly analyze why that was the case and work on things looking better again in Moscow. We’re keeping our fingers crossed for Rocky to get fit again very soon. The accident was a great shock for all of us. Fortunately, the consequences weren’t too severe.”

“A really troubled weekend for us. Things didn’t go well in either race. That we have a safe car and that Rocky only broke a metatarsal bone in the hard side impact was a positive. Being lapped with one car and suffering a frame damage with the other one is hard. Now we’re going to chalk this weekend up to experience and hope to be traveling to Moscow with Mike.”

“The Norisring was not our track this time. I hope that on a classic race track we’ll get back to our normal performance. That Jamie (Green) scored points twice on this difficult weekend was a positive.”