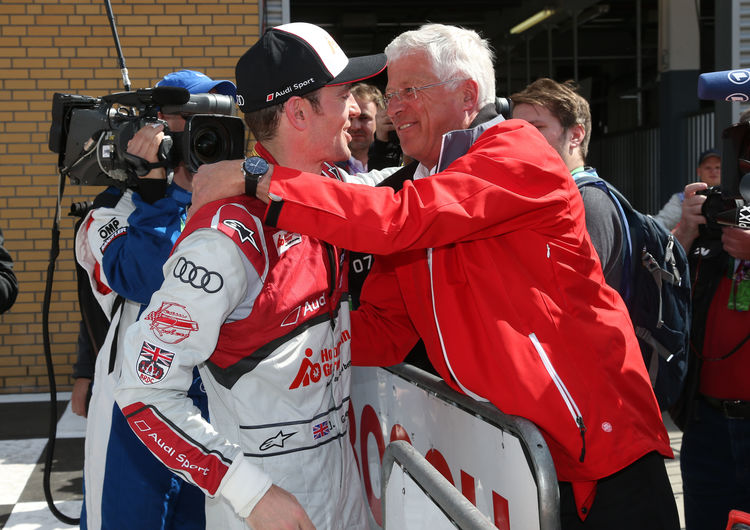 Dieter Gass (Head of DTM at Audi Sport): “You don’t get to see a one-two-three-four win in the DTM very often. That we even had five of our cars at the front on Sunday crowns a perfect DTM weekend for Audi – particularly on a track we were frequently having some difficulties with in the past. This shows how strong the Audi RS 5 DTM is. Following his victory at Hockenheim, Jamie Green seems to have finally made his breakthrough. On Sunday, he took the pole position with an advantage of more than half a second. That’s rare in the DTM as well. Plus, he had to battle for his victory against strong competition within the squad. After this weekend, we really have a reason to celebrate, but we also know how quickly the tables can turn again in the DTM. Our home round at the Norisring in four weeks from now will literally be a heavy challenge because we’ll have to add even more weight to our cars.”

Jamie Green (Hoffmann Group Audi RS 5 DTM #53) Position 1 / position 1
“A fantastic weekend, arguably the best one in my career. Two victories, a commanding best time in qualifying with a half-second advantage, plus the fastest lap in both races – you can hardly achieve more than that. I was fast at the Lausitzring before, but this year I’ve upped the ante. It was a mega job by everyone involved. The Audi RS 5 DTM seems to be tailor-made for me this year. Now I’m looking forward to traveling to the Norisring as the leader of the standings. It’s one of my favorite tracks.”

Mattias Ekström (Red Bull Audi RS 5 DTM #5) Position 3 / position 2
“I must have been at the Lausitzring 50 times in my career – including tests. And I often went home with my head hanging because something didn’t fit or we weren’t fast enough. This time, it’s totally different, because even though I obviously would have preferred winning myself, I’m happy about our strong performance as a team. I’m always really impressed about the fans at the Lausitzring. I don’t know if I ever did anything special, but the people are always incredibly friendly and warm to me. If I could state a wish it would be to have even more time for our spectators in the future.”

Edoardo Mortara (Castrol EDGE Audi RS 5 DTM #48) Position 2 / position 5
“This DTM season is really great fun: four races, four times in the top five and two of them on podium. But the fact that Audi has given us a real winning car in the RS 5 DTM is a lot more important. Everyone knows that we won’t be celebrating success like the one at the Lausitzring every weekend. But every one of us has the opportunity to win races and to battle for the championship – 14 more times this season. In a couple of days from now, the opening of my second restaurant in Geneva is on my agenda, plus plenty of training and, obviously, looking forward to one of the season’s highlights at the Nuremberg Norisring.”

Miguel Molina (Teufel Audi RS 5 DTM #17) Position 4 / position 3
“This has been the first weekend that I’ve really been in contention at the Lausitzring. Pole on Saturday and a podium on Sunday – the only thing that was missing was a victory. I’m happy with my performance. Jamie (Green) and Mattias (Ekström) are in a class of their own – but catching up with them is my next goal. Maybe already at the Norisring. The time until then won’t be boring. I’m going to train a lot, plus round two in the Spanish Kart Championship is coming up in which I’m taking care of a team. The opener went well and now we’re aiming for our first victory.”

Timo Scheider (AUTO TEST Audi RS 5 DTM #10) Position 8 / position 4
“We worked for our success this weekend. On Saturday, the set-up of the car and my driving style didn’t fit together yet. We made some changes for Sunday and rewarded ourselves with grid position three and fourth place in the race. For Audi, the event at the Lausitzring has now been the second perfect weekend. Still, we’re not getting anything for free. In qualifying, the cars in positions two to 24 were only within five tenths of a second – that clearly shows how close the battle is in the DTM. Two commanding victories like these on a track that didn’t suit us really well in the past probably amazed a lot of people. And, honestly speaking, we were a little amazed ourselves. Now the Norisring is coming up where we haven’t really been looking good for a long time either. We’d like to cause another surprise there.”

Nico Müller (Audi Financial Services Audi RS 5 DTM #51) Position 20 / position 9
“If you weigh the positives against the negatives, my Lausitz weekend with two points on Sunday just barely ends up in the positive range. I don’t have a lot of experience on this track yet because my first run at the Lausitzring last year lasted only ten laps. There was more potential in round two, but in the DTM everything’s got to perfectly fit if you want to be further in front. Audi is extremely strong this year and my Rosberg team has already scored three in four victories with Jamie. So it promises to become an exciting year. After the 24-hour race at the Nürburgring and the DTM I’m now looking forward to a breather. Then we’re traveling to the Norisring – that’s a highlight for me because I’m a big fan of city street circuits.”

Mike Rockenfeller (Schaeffler Audi RS 5 DTM #99) Position 9 / position 10
“Congratulations to Audi and my brand colleagues who really scored big at the Lausitzring. Obviously, I’m anything but happy with positions nine and ten. I’ve got to chalk that up to experience and see what I can learn from it. Our car is top and I’m going to battle to put all the factors together again as soon as possible. There are still 14 more races to go and victories continue to be my goal. The Norisring is a special event because it’s the home round for Audi and for our partner Schaeffler. Before Nuremberg, I’ll be at Le Mans with the squad as a reserve driver. Obviously, I’m hoping that there’ll be no need for me to run there but I’m going to support the guys as best I can.”

Adrien Tambay (Playboy Audi RS 5 DTM #27) Position 16 / position 20
“This must have been the cruelest weekend in my DTM career. The beginning was really bad because I had to start from the rear of the grid due to an engine repair. On Sunday, I gave everything to somewhat recover. Things were looking good for a long time because I had several good overtaking maneuvers and had already recovered to ninth place when I was turned around by a rival. So my personal 2015 DTM season will only really start at the Norisring. Now I’m going to spend some time with friends and especially with my family. That’s the best way for me to clear my mind again.”

Arno Zensen (Team Director Audi Sport Team Rosberg)
“Jamie (Green) has won three in four races – that’s sensational. We’ve never before had such a good start to a DTM season. After finally winning his first race for Audi at Hockenheim, he set off a few rockets. Jamie’s mind is clear, he feels comfortable in the team, and is simply on a roll. I’m particularly happy for my guys who had a tough period of preparing and are now being rewarded for their commitment. It feels great to see one of them represented on podium taking a champagne shower.”

Hans-Jürgen Abt (Team Director Audi Sport Team Abt Sportsline)
“Congratulations to Jamie (Green), who drove in a world of his own this weekend. He’ll be the yardstick for his brand colleagues from now on. I’m proud of my team and my drivers, who clinched four of six possible podium positions this weekend. Even through we’re literally in for a heavy task at the Norisring because of the additional weight, the whole squad will be traveling to Audi’s home round at the Norisring with plenty of tailwind. But before that, we’re going to keep our fingers crossed for the guys at Le Mans.”

Ernst Moser (Team Director Audi Sport Team Phoenix)
“Even after two events we can say that Audi Sport did a perfect job last winter and in all the pre-season tests. Four victories in the first four races are an impressive result. Our two guys haven’t really had their chance yet. But these are the little screws you’ve got to turn in the DTM in order to finish on the podium or win races. So, we’ve got a few things on our list to check off before the Norisring. The Audi RS 5 DTM is a winning car – so we’re determined to win with it, too. Aside from preparing for the next race I’m personally looking forward to visiting the 24-hour race at Le Mans as a spectator.”