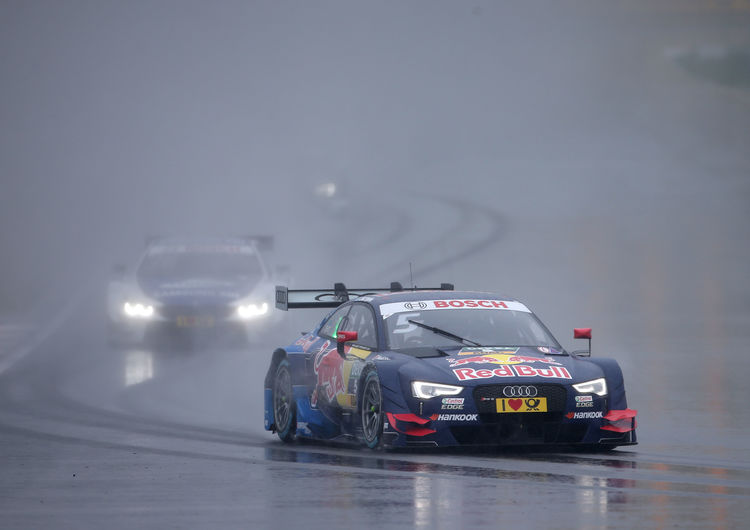 Rain determined the action on the race track near Moscow on Saturday. A preliminary decision was made in the morning’s qualifying session. After Audi had been battling for pole position for a long time, Mattias Ekström in the Red Bull Audi RS 5 DTM of Audi Sport Team Abt Sportsline in the end had to settle for grid position five as the best Audi driver, and the title hopefuls, Jamie Green (Hoffmann Group Audi RS 5 DTM/Audi Sport Team Rosberg) and Edoardo Mortara (Castrol EDGE Audi RS 5 DTM), even for positions ten and twelve.

Due to heavy rain, the race directors decided to send the field into the race behind the Audi R8 safety car. This meant that the Audi drivers had no opportunity to make up ground at the start. While Mattias Ekström defended his fifth place after the race was released, Jamie Green and Edoardo Mortara went on to battle their way forward to positions seven and eight in difficult conditions, which earned them valuable points. With Timo Scheider in the AUTO BILD MOTORSPORT Audi RS 5 DTM in position nine, Audi Sport Team Phoenix scored points as well.

“The championship has become even closer after this race,” said Dieter Gass, Head of DTM at Audi Sport. “In the teams’ classification, we’re in front again, in the manufacturers’ classification, we’re trailing Mercedes-Benz by only five points and in the drivers’ classification, Jamie (Green) merely has a four-point deficit separating him from Robert (Wickens). That’ll be very exciting tomorrow. Following a less than perfect qualifying for us, it was difficult to achieve more from these grid positions. The safety car start didn’t help us either because in rain the start offers one of the best overtaking opportunities. I think we extracted the best from the grid positions and showed a good team performance in the race.”

“For me, unfortunately, it wasn’t a particularly thrilling race,” added Mattias Ekström. “I started from position five and finished in fifth place. That says it all. I had fantastic car, but we were somewhat off the mark with the tire pressures because we’d placed our bets on a drying track. That’s why, unfortunately, I had hardly any grip and there wasn’t a lot I could do.”

Race two at the Moscow Raceway will start on Sunday at 13:10 local time. ARD will begin to air live coverage from Russia on “Das Erste” at 12:05 (CEST).