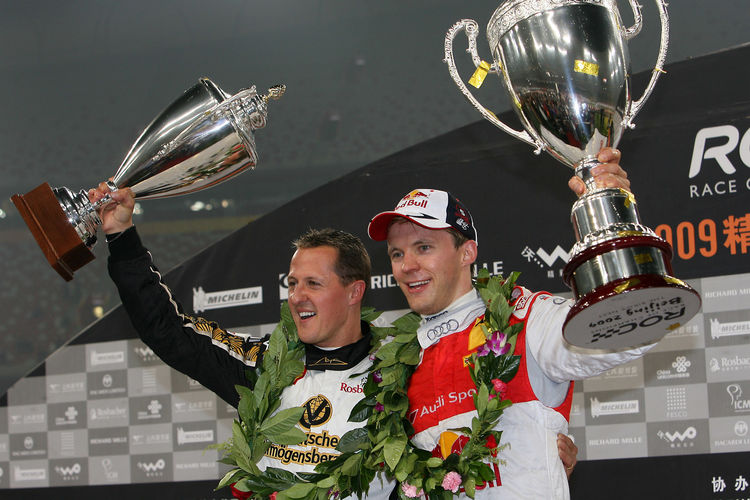 He’s the man who defeated Michael Schumacher – not just once, but twice in the “Race of Champions” – at the wheel of identical cars. There are very few racers in the world who have such a feather in their cap. But when the new DTM season starts at Hockenheim on April 25, 2010, the Swede Mattias Ekström will pursue an altogether different goal: the Audi “factory” driver wants to clinch his third DTM title and score his personal hat-trick.

November 4, 2009, 10.55 p.m., Beijing, Olympic Stadium. Mattias Ekström sends cheers to the crowd in the stands of the “Bird’s Nest.” Michael Schumacher has just leaped onto his shoulders: an expression of “well done” and admiration by the seven-time Formula 1 World Champion to the two-time DTM Champion who has just defeated him in the legendary “Race of Champions”: for the second time after 2007 – so obviously it wasn’t sheer luck, but a bit more than that.

“It was a great feeling to have competed against him and won,” the 31-year-old Audi “factory” driver freely admits. “But not just for me personally but also for the entire DTM racing series because it makes many outsiders see how high our level is.” Ekström knows what he’s talking about: since 2001 he’s been racing in the most popular international touring car series, and twice – in 2004 and 2007 – he took the champion’s trophy home after the finale. Two further titles followed for Timo Scheider and Audi, but for Ekström it was a barren spell to which he plans to put an end in his anniversary season, his tenth in the DTM.

“We want to fully concentrate on testing, repeat last year’s performances in qualifying and improve in the race.” This is how Mattias Ekström sums up the results of the recent discussion he had with his race engineer Alex Stehlig at Audi Sport Team Abt Sportsline in Kempten. And then the mischievous Swedish smile for which he’s famous appears on his face. Attacking, that’s the name of the game, putting rivals in their place and clinching the champion’s title again – that’s what the racer and his congenial trackside partner are truly shooting for.

This, by the way, had been the same plan a year ago when friends and competitors had to look twice when Ekström appeared on the scene: with well-toned muscles, in top physical shape and brimming with motivation – that’s how the Scandinavian presented himself at the season opener. And then he had a streak of bad luck that didn’t give him the slightest break: from running out of fuel all the way to punctures on two occasions while leading the race, it contained everything a racer doesn’t need. “2009 was the year in which I suffered more mishaps than in any other,” says Ekström.

Now the barren spell should come to an end. “You see, another decision Alex and I have made is not to be struck by nearly as much misfortune as before,” says Ekström with a grin on his face. In 2001, both of them joined the DTM together; they know each other inside and out. And they also know their rivals well. Ekström: “As in the years before, Audi and Mercedes will be battling against each other on equal footing. It’ll be crucial to deliver a consistent performance, score points and set some highlights. That’s the way to achieve our big aim, the title.” Ekström has put this goal before anything else and even decided to cancel his planned participation in the 90-kilometer “Wasa run” on skies through the Swedish woods. “My schedule is simply too tight. And if you do it, you’ve got to do it right.” The form and physical fitness he’s achieved while preparing for the season will now help him do his job in the cockpit of the 350-kW-Audi A4 DTM.

Besides running, cycling, skiing or exercising with other types of sporting equipment, Ekström used the race-free winter season to relax. A bout of swine flu in December passed rather quickly, so there was nothing to keep him from spending a few quiet weeks in Salenstein, Switzerland, where the professional racer now lives with his girlfriend Heidi. “I really love sports and action, but I’ve also got to recharge my batteries from time to time, and I was able to do that.” So Ekström is all set for the season opener at Hockenheim that kicks off the DTM’s tour of Germany, Spain, the Netherlands, Great Britain and China.

Speaking of China: after racing at Shanghai in 2004 where he finished third as the best Audi driver, and a longer stay there during the “Race of Champions,” Ekström can almost be considered the Far East expert among the squad of Audi “factory” drivers. “I think it’s great to compete with the DTM in a totally different cultural environment. There are many enthusiastic fans in China who are happy about the chance to get a close-up view of the cars and the drivers.” His culinary advice, though, suggests that he’s either reluctant to experiment or not very fond of Chinese cuisine: “I’d look for the big yellow ‘M’ ...”

Despite all his concentration on the DTM he finds time to take a quick look at Formula 1 – and even offers a betting tip. “I’d bet quite a bit of my money on Michael Schumacher winning some races,” says Ekström. “He’s won seven titles and his name is Schumacher – so it’s clear that he’s got to set ambitious goals for himself. But I see other drivers running in front of him there and then; despite all his experience, he’s going to learn the hard way.” Ekström refuses to name any favorites, but knowing that Sebastian Vettel belongs to his circle of friends, often visits him at his home on Lake Constance and has close ties to the red bull like Ekström, it should be easy to figure out whom he means.

After the DTM title has been decided, Michael Schumacher could soon be back on Mattias Ekström’s agenda: should they meet again at the “Race of Champions,” Ekström will have the chance to score his personal hat-trick in the race against Formula 1’s super star. The fight for his hat-trick in the DTM will take place on the ten race weekends before then. The campaign starts on April 25.