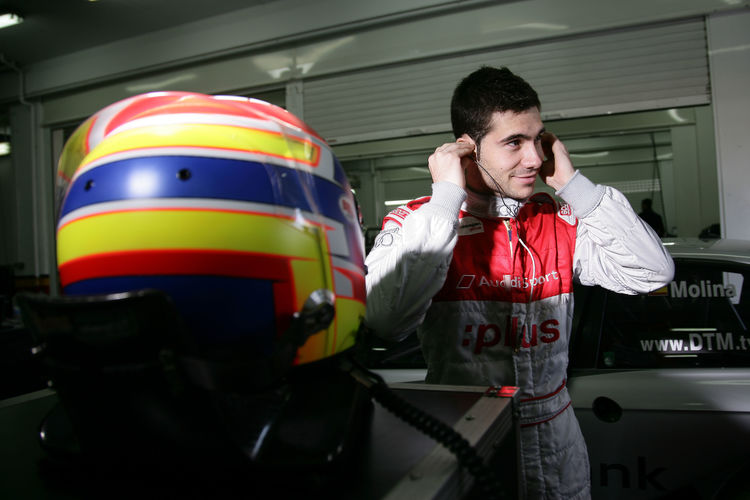 He’s only 21, the first Spanish racer in DTM history and the “new kid” in the Audi driver squad: On April 25 Miguel Molina will contest his first race with the Audi Rookie Team Abt in the Audi A4 DTM – with his sights set on shaking up “The Establishment” of the most popular international touring car series.

Spain in the limelight: in January Carlos Sainz won the legendary Dakar Rally for Volkswagen. In March Fernando Alonso started into the 2010 Formula 1 season with a win. And now Miguel Molina steps on stage. He’s proven more than once with Audi that he’s got the potential to follow in the footsteps of Carlos Sainz and Fernando Alonso.

Chapter one: Molina’s first contact with Audi Sport dates back more than two years. “He was always very fast in track tests with the A4 DTM,” recalls Head of Audi Motorsport Dr. Wolfgang Ullrich. “But we felt that at the age of 18 it would have been too early for him to enter the DTM.” Nevertheless, Molina proves that he’s a good sport: after his test at Almería in southern Spain the young driver visits the Audi “factory” team in 2008 at the DTM’s round at Barcelona and watches the race from the pits as a guest.

Chapter two of his showing: after the 2009 season Audi gives him another testing opportunity in the Audi A4 DTM at Almería. “I’m pleased to see that he confirmed the good impression and performance of the previous test,” says Dr. Wolfgang Ullrich. Molina’s reward: the promising youngster receives a “factory” contract and will contest the 2010 DTM season for Audi Sport Rookie Team Abt. “I’m really proud to be able to compete in such a powerful series for the Audi brand,” enthuses Molina, who first came into contact with motorsport in his father’s kart team in the nineteen-nineties.

Chapter three: during the last week of February 2010 Miguel Molina takes advantage of the opportunity to prove his sporting prowess at the Winter Camp held at the Sonnenalp in Ofterschwang. “His ability to move really seems like magic,” raves Audi’s team physician Dr. Christian John after the camp. “He’s also a very pleasant person and thus a real gain for the squad.” Molina’s daily sport program lasts about two and a half hours. He works on his physical fitness at a sport school in Barcelona together with up to 500 other professional sportsmen. His favorite sports include soccer and roll hockey.

Chapter four: official DTM track tests at Valencia from March 24 to 27. Newcomer Molina finishes the competitive test as the second-best driver overall with a gap of seven thousandths of a second behind Ralf Schumacher and as the best Audi “factory” driver. The fact that 330 laps also make him the most diligent Audi racer strengthens his reputation even further: his team has started to nickname him “Magic Molina.” “In Timo (Scheider), Mattias (Ekström), Martin (Tomczyk) and Oliver (Jarvis) I’ve got four very good team colleagues. I can benefit a lot from their experience because for me the main thing now is to learn,” comments the Spaniard, being modest about his achievements as he is just facing his first touring car season of his career.

Just Valencia, Oschersleben and the Nürburgring are the only circuits on the DTM schedule he knows from personal experience. Miguel Molina, who always puts on his right shoe and left glove first when racing learns fast, reacts fast and drives fast. We can all look forward to chapter five of his young career with Audi. It will start on April 25 at Hockenheim.