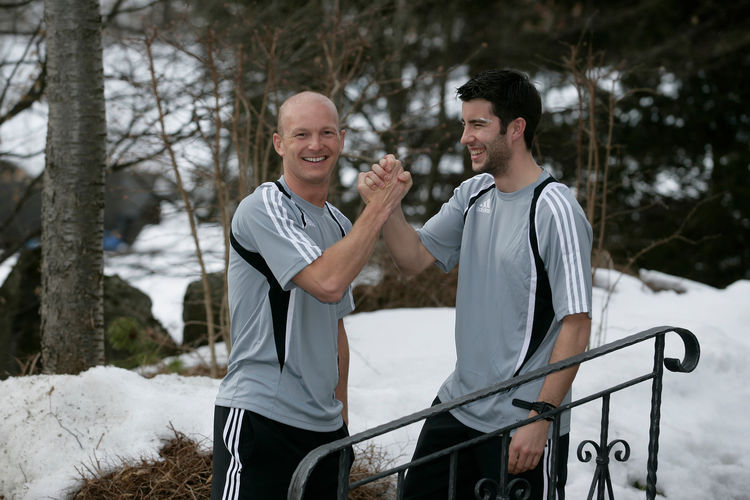 In a manner of speaking, the 2010 DTM will see the two Audi “factory” drivers Alexandre Prémat and Mike Rockenfeller experience a “reunion.” The two finished the 2008 season as team colleagues in Audi Sport Team Joest at the wheel of the Audi R10 TDI by winning the European Le Mans Series but have always contested the DTM for different teams – the Frenchman for Audi Sport Team Phoenix, the German for Audi Sport Team Rosberg. Now, for the first time, both will be team-mates at the wheel of two Audi A4 DTM cars fielded by Phoenix.

For the past three years the careers of Alexandre Prémat and Mike Rockenfeller have been running in parallel – always marked by the symbol of the four rings. For the 2007 season Audi signed the then 24-year-old Frenchman and the 23-year-old German to refresh its DTM driver line-up by some young guns. The success of this endeavor was not long in coming. Both drivers clinched their first podium finishes right in their debut season and, what’s more, at the wheel of year-old cars: Mike Rockenfeller took third place at Oschersleben in his second DTM race; Alexandre Prémat finished the seventh race of the season at Zandvoort as the runner-up.

A year later, Head of Audi Motorsport Dr. Wolfgang Ullrich, in parallel to the DTM program, placed his trust in the services of the two young drivers in the European Le Mans Series (LMS) and at the 24 Hours of Le Mans. As sports car team-mates, they competed for Audi Sport Team Joest in an R10 TDI. And they certainly justified the trust that had been placed in them: in a contest with a highly demanding rival the duo managed to clinch the title in the end. This exploit not only marked a personal highlight in the careers of the two professional racers. It also meant that they contributed a valuable victory to a season that was successful in every respect for Audi since the brand also won the American Le Mans Series, the 24 Hours of Le Mans and the DTM – and thus every title Audi had been competing for.

After the third year in the DTM it was time for a change: “I needed a new challenge,” says Mike Rockenfeller, explaining his reason for leaving Audi Sport Team Rosberg after three years. “I want to thank the team for all its work. We had a good time together, achieved some nice exploits and got over our defeats together as well. I always got on well with my team colleague Markus Winkelhock too. Now I’m looking forward to working with Audi Sport Team Phoenix. I’m starting out with fresh motivation and have begun to feel that this has been the right move for me.” The squad based in Meuspath near the Nürburgring is already familiar with its new member: in the 2009 season “Rocky” drove an Audi R8 LMS for Ernst Moser’s team in the 24-hour race at the Nürburgring.

“Mike was one of our high performers in that race,” says Ernst Moser. “Within his driver team he assumed responsibility and that impressed me very much. He gets along very well with Alex. Both of them are still young, but mature enough to tackle the challenge of performing in a way that is in line with Audi’s spirit. We’ve got two personalities here that embody a combination of youth and experience.”

Alexandre Prémat is looking forward to as much as his fourth season with Audi Sport Team Phoenix. “Hearing that Mike will become my team colleague was definitely good news,” comments the Frenchman. “We won the LMS together. In the DTM, there’s been a healthy rivalry between us with door-to-door duels, but always marked by fair play in every respect. The development with Mike is very good for the whole team.” While Rockenfeller will also compete at Le Mans, Prémat will exclusively focus on the DTM for the first time this year: “I made this decision together with Audi, and it was anything but easy. But now I’m concentrating all my energy on the goal of becoming the best DTM driver of a year-old car and to score as many points as possible – preferably in every race.”

The spectators can look forward to some top-caliber battles. The fact that both drivers get on well with each other on a personal level doesn’t mean that they’ll give each other a break on the race track. Rockenfeller and Prémat, who both live in Switzerland, just 16 kilometers apart from each other, have given the spectators some lasting memories. While sitting together in the Audi DTM lounge at night watching TV footage of their fierce wheel-to-wheel duels the two young guns regularly break out in hearty laughter and slap each other on the back in a spirit of brotherhood. Not to worry – the smoke from tires scraping the tarmac is not a sign of heated controversies but of top sport at the limit. To be continued in the 2010 season …