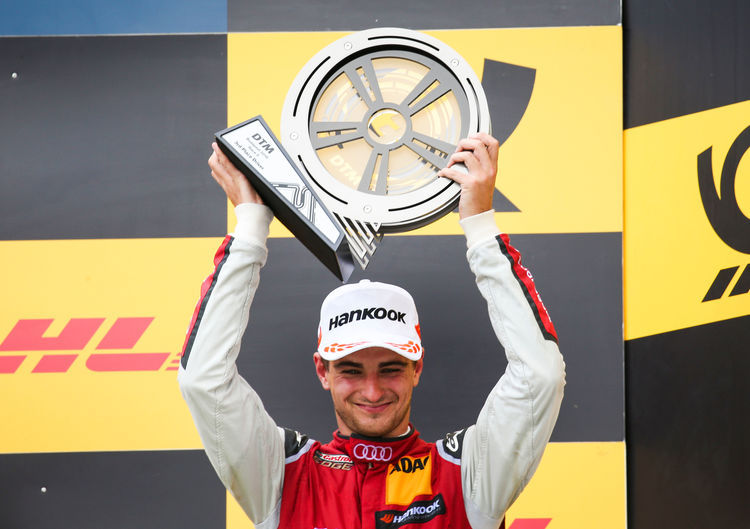 Five Audi RS 5 DTM cars in the top ten and 41 points in total: Audi has achieved its best result this season to date in Saturday’s race of the DTM’s visit to Hungary at Budapest. The Swiss Nico Müller (Audi Sport Team Abt Sportsline) in third position clinched his first podium this season.

Following a difficult start of the season, Audi presented itself in stronger form at the Hungaroring right from the beginning. In the first free practice session on Friday, Jamie Green (Audi Sport Team Rosberg) set the best time and in rain on Saturday morning DTM rookie Robin Frijns was in front. In the subsequent qualifying, Nico Müller in the Castrol EDGE Audi RS 5 DTM only had to admit defeat to Paul Di Resta in a Mercedes-Benz by 135 thousandths of a second. René Rast (Audi Sport Team Rosberg) in his comeback drive following his serious accident at the Lausitzring took position four on the grid.

In the race, the Audi drivers used extremely diverse strategies. Jamie Green, for instance, stopped after only one lap and Mike Rockenfeller just shortly before the end of the race. Nico Müller was defending second position in the early stage but, following his pit stop on lap ten, dropped behind Lucas Auer in a Mercedes-Benz. Afterwards he brought third position home in commanding style in spite of having come under pressure from René Rast in the final stage. Rast had pitted later and was able to attack on the fresher tires.

“This was a good day,” said Nico Müller. “The front row, the first podium this year and many good points: the season has finally started for me! I’m happy for my team and my guys. We made a good step ahead this weekend. Now we’re going to continue to work hard in order to be even stronger tomorrow and in contention for the podium again.”

His teammate, Robin Frijns, on clinching position seven, achieved the best result in his still young DTM career. The Dutchman finished in the points for the second consecutive time. Loïc Duval (Audi Sport Team Phoenix) placed eighth, Jamie Green ninth. Mike Rockenfeller, after having started from the last position on the grid, finished in eleventh place, just barely missing a point after having been pushed back on the last lap by Daniel Juncadella. The Mercedes-Benz driver received a warning for the incident.

“Five cars in the points, Nico (Müller) on podium for the first time this year and René (Rast) in fourth position: looking at the way the season has gone to date, we can be very happy with the result,” said Head of Audi Motorsport Dieter Gass. “It was a clean race by all of our drivers with diverse strategies. It’s a shame that Mike (Rockenfeller) did not make it into the top ten in the end, otherwise we would have brought all cars into the points.”

The second DTM race at the Hungaroring will start on Sunday at 1.30 PM (CEST). SAT.1 will begin airing live coverage from Hungary at 1 PM.