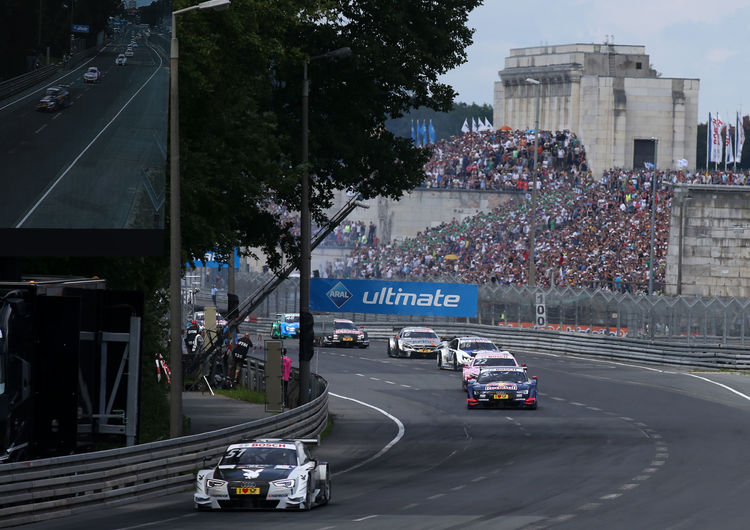 Audi will be traveling to the DTM season’s pinnacle event as the front runners in all three classifications this weekend. Before the race at the Norisring in Nuremberg, three Audi drivers are ranking in the top four spots of the drivers’ classification. And all three of them love the city street circuit: René Rast, Jamie Green and Mattias Ekström are going into the race with great expectations.

DTM shooting star René Rast in his Audi RS 5 DTM after the first third of the season is leading the standings. His track record at the Norisring is strong, highlighted by success in 2012 when Rast in the Porsche Carrera Cup took pole position twice, won both races and set two fastest race laps. “I like city circuits,” says the campaigner from Audi Sport Team Rosberg that is leading the teams’ classification. “The Norisring is a great challenge. It’s bumpy and you have to brake late – that suits my style.”

His teammate, Jamie Green, is nicknamed “Mr. Norisring.” An amazing four times the Briton has won on the short, 2.3-kilometer city street circuit between the “Dutzendteich” lake and the Nuremberg soccer stadium. “There are other DTM tracks I find more challenging to race on,” says the Briton. “But for the fans, the circuit is perfect. And that the Norisring suits me well is something I’ve not only proven by having won there four times. I’ve always been fast there.”

This can be said about Mattias Ekström as well, who has been racing at the Norising for 17 years as one of the strongest Audi drivers on every occasion. While the Swede has been on podium in Nuremberg seven times to date, he is still lacking a victory at the Norisring. This weekend will present him with two more opportunities for which he has even passed up his participation in the World RX round in his homeland. “I’m happy that my boss (Dieter Gass) has made this decision for me,” says Ekström. “That of all events there’s a clash between my home race in Höljes and one of my favorite races in the DTM is a real shame. I’d have loved racing at both events but, unfortunately, that’s not possible.”

“It was a very difficult decision because we’re still early in the season and Mattias has title chances in both championships,” says Head of Audi Motorsport Dieter Gass. “But the factory commitment in the DTM has priority for us. Mattias can win his third DTM title this year and has always been very strong at the Norisring. Last year, we finally won again at the Norisring after a long time. We’d like to continue this success, but are expecting an extremely close event. Technically, brake, traction and top speed are the be-all and end-all in Nuremberg – and all of these are strengths of our new Audi RS 5 DTM.”

The two DTM races at the Norisring will start on Saturday at 1:25 PM CEST and on Sunday at 5:20 PM. ARD will be airing live coverage from Nuremberg on “Das Erste.” Tickets and Audi fan packages are available online at www.audi.com/dtm.

#DTMNorisring: Did you know that …

… today’s DMSB President Hans-Joachim Stuck in 1990 and 1991 achieved the first two Audi victories in the Audi V8 quattro at the Norisring?

… Laurent Aiello in 2002 overtook Mercedes-Benz driver Bernd Schneider in the last turn, winning the Norisring race in the Abt-Audi TT-R?

… the entire field was within half a second in both of last year’s qualifying sessions?

… Mattias Ekström in 2016 did the fastest lap of the whole weekend (47.804 seconds) in Sunday’s qualifying?