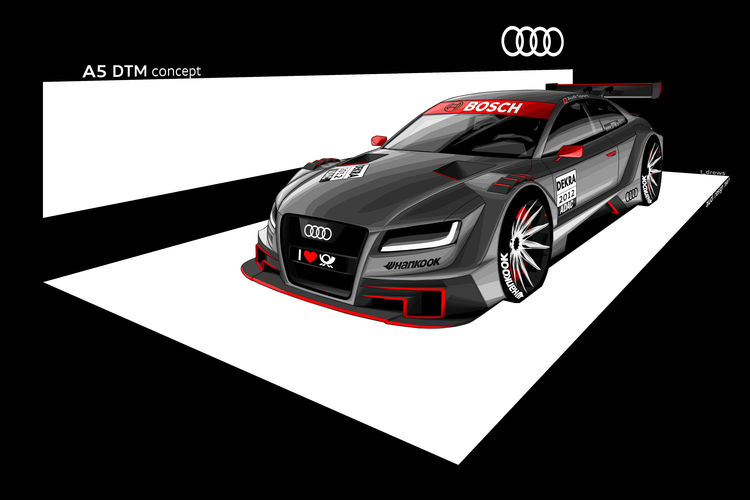 Model change in the DTM: From 2012 on, Audi will bank on the A5 in the most popular international touring car racing series. The coupe, which is internally named “R17,” will replace the four-door A4 DTM with which Audi has won the prestigious DTM title four times since 2004.

The technically and visually upgraded A5 that is will be arriving at dealerships shortly provides the basis for the new DTM car. “In 2012 new Technical Regulations will come into effect in the DTM,” says Head of Audi Motorsport Dr. Wolfgang Ullrich. “We’ve got exactly the right model for that in the A5. We’re convinced that we’ll be able to continue Audi’s success story with it in the DTM.”

The new technical specifications have been worked out by the German Motorsport Association (DMSB) and the DTM umbrella organization ITR in close cooperation with the automobile manufacturers and are setting new standards particularly in terms of safety. “Our engineers have been involved in bringing up safety in the DTM, which had already been high before, to the highest possible level,” explains Dr. Ullrich. “At Le Mans this year we learned again that our concept of designing safety structures is a very good and appropriate one. This is exactly what we’ve been trying to feed into the DTM’s safety concept together with our colleagues from BMW and Mercedes-Benz. This new principle is an outstanding example of what is possible when employees of three premium manufacturers try to achieve a common aim: to get the best possible, lowest-cost and safest vehicle – and a fantastic car in general – off the ground.”

Like all new DTM cars, the new Audi A5 DTM has a high-strength carbon-fiber monocoque that is combined with a steel tube cage. In addition to the A- and C-pillars the new regulations prescribe a B-pillar in front of the driver’s head to be installed in the future. The sidewalls of the vehicles feature a hybrid design with a carbon, Zylon and Rohacell construction that is structurally reinforced by pegs. In case of a side impact the walls have to be able to withstand a static load that is about four times higher than before. “The sidewall has been reinforced so that the new DTM vehicle can be exposed to a side impact (T-bone crash) without the wall failing,” explains Dr. Mühlmeier, Head of Technology at Audi Sport. “Up to now, a bearable side force of 80 kN at a specified point has been required whereas for the 2012-specification vehicles 360 kN across the whole length of the sidewall is now required. This means that the monocoque has not only been reinforced at a certain point but across the entire length.”

The requirements for the front and rear crash absorbers have been increased as well. “At higher speed lower deceleration is specified in order to protect the driver even better than before,” says Dr. Mühlmeier. “To achieve this, a crash test with the whole vehicle is now prescribed for the first time as well – according to FIA standards with 14 meters per second forward and backward against a rigid wall. In the past, ‘only’ the front and rear crash elements had to be driven against a wall with a sled.”

Although fire accidents have almost never occurred in the DTM the safety standard in this respect has been raised even further as well. In the new generation of DTM cars the fuel tank, similar to the Le Mans winning Audi R18 TDI, is integrated into the carbon fiber monocoque. This further reduces the fire hazard in case of a side impact crash.

For Audi the new DTM regulations mark a consistent continuation of the work done over the past three decades. The rally cars already had a high level of safety. For the supertouring cars Audi Sport developed a completely new side impact protection of carbon fiber and energy-absorbing foam in the middle of the nineteen-nineties. Ever since Audi has had sports prototype commitments crash tests and work with high-strength carbon composite materials have been part of its routine business. And for the R8 LMS GT3 sports car Audi introduced a pioneering safety concept for this category in 2011. “We’ve continuously improved in this area and will do so in the future as well,” stresses Dr. Wolfgang Ullrich. “The new DTM vehicles are the best piece of proof that you can make something that is already very safe even saver. This is another thing we mean by ‘Vorsprung durch Technik.’”

The first prototype of the R17 is currently being built up at Audi Sport in Ingolstadt. The roll-out is just around the corner. The new Audi A5 DTM will be unveiled to the public at the International Motor Show (IAA) in Frankfurt.

The V8 engine with a power output of about 460 hp (340 kW) will be adopted from the successful A4 DTM nearly unchanged. The proven six-speed transmission will continue to be used as well. Characteristic features of the 2012-generation of DTM vehicles are a larger rear wing and a reduction of the permitted aerodynamics components. The concept studies of the Audi A5 DTM by the Audi Design Team merely suggest the looks of the new Audi race touring car.