Skip to content
We are using cookies for a better user experience.
11/09/20
Neuburg a. d. Donau
Sport 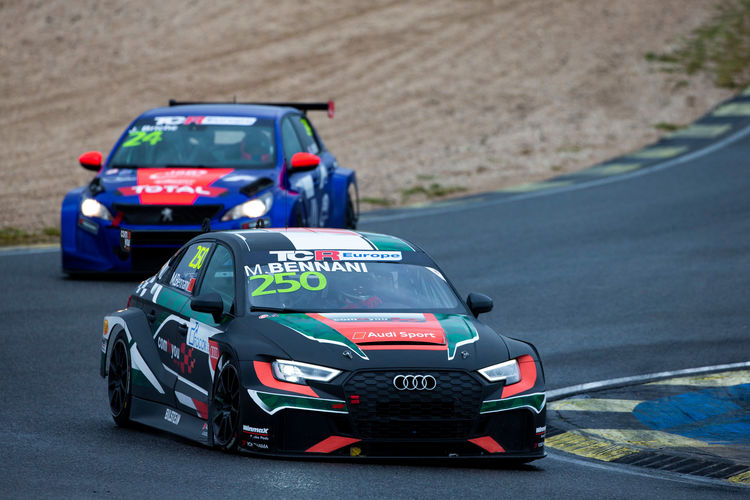 The private team Comtoyou Racing celebrated a success all along the line in TCR Europe with the victory in the overall, team and trophy classifications. The team had previously won the TCR Benelux. Audi Sport customer racing won further titles in the GTC Race series with the GT3 sports car and in the Nürburgring Langstrecken-Serie with its models for the GT4 and TCR classes.

Three titles in Jarama: In a compact season lasting just eleven weeks, Comtoyou Racing won all three championship titles in TCR Europe with the Audi RS 3 LMS. At the finale of the most prestigious European TCR touring car series in Jarama, Mehdi Bennani finished second in the last of twelve sprint races, enough to win the drivers championship with a 28-point lead. The 37-year-old Moroccan was much more consistent over the course of the season than his 33 opponents and benefited from his qualifying strength. Bennani scored points in nine of twelve races, had started from pole position twice and was on the podium three times. The private Audi driver scored 50 of his 285 points alone, far more than any other driver, in qualifying. With a 105-point lead, Jean-Michel Baert’s team also secured the team classification of the racing series. Victory in the Yokohama Trophy, in which 13 drivers took part, went to his son Nicolas Baert. The 19-year-old Belgian won the class as best rookie in the Audi RS 3 LMS ahead of his Moroccan teammate Sami Taoufik. At the same time Baert finished his touring car debut season in the overall standings in a remarkable third place. In addition, Baert scored two successes in the TCR Benelux, based on four of the six rounds of the TCR Europe. Baert won this trophy ahead of Bennani and Taoufik, while the Audi customer team Comtoyou also won the team classification there. This means that this season 13 overall or class titles have already gone to drivers and teams worldwide who put their trust in the Audi RS 3 LMS.

Success for Bonk Motorsport: Hermann Bock won the 2020 season classification of the SP3T class in the Nürburgring Langstrecken-Serie (NLS). After the cancellation of the final rounds, the gentleman driver won the classification for touring cars with turbo engines up to two liters capacity in the Audi RS 3 LMS of the Bonk Motorsport team in front of 26 other participants. The businessman from Bavaria has been competing nationally and internationally with the touring car from Audi for years. This year, he took one victory on the Nordschleife as well as one second and two third places with alternating teammates in the NLS. In addition, he clinched third place in the TCR class at the Nürburgring 24 Hours.

Championship lead maintained: On the fifth of six TCR Italy race weekends, Audi privateer Eric Brigliadori maintained a narrow lead in the standings. He had come to Monza with a five-point lead, but after the first of two sprints on the high-speed circuit he was one point behind. The second race began in seventh place on the grid for the young driver in the Audi RS 3 LMS of the BF Motorsport team. In the frenzy early stage of the race with accidents and a safety car phase, he kept a cool head and improved to third position over the course of five laps. On the ninth lap he overtook Salvatore Tavano, who had led the standings at that time, and finished second in the race. Brigliadori thus turned a one-point deficit in the standings into a two-point advantage over Tavano. The championship will be decided in two weeks time at Imola.

Second place in New Zealand: In the one-off New Zealand Endurance Championship event, a private driver in an Audi RS 3 LMS achieved a podium finish. Dennis Chapman took second place in his class for Team Track Tec Racing in the one-hour race at the Highlands circuit.

Podium place at the finale: Audi Sport driver Mirko Bortolotti and his teammate Rolf Ineichen ended the 2020 season of the ADAC GT Masters with second place at Oschersleben. At the finale, the Italian and Swiss driver started from second place in the Audi R8 LMS of Team WRT. As the best of eleven Audi driver teams, they also finished the race in second place. They thus achieved their best performance of the season in this racing series. Bortolotti also managed the fastest race lap in the Motorsport Arena Oschersleben. The weekend was disappointing for last year’s champions Kelvin van der Linde/Patric Niederhauser from Rutronik Racing. The Audi Sport drivers had come to Oschersleben as championship leaders, but lost one position in the standings after finishing sixth in Saturday’s race. A starting accident of Kelvin van der Linde deprived the duo of all chances on Sunday. As the best Audi driver pairing, they finished the championship in fourth place ahead of Audi Sport driver Christopher Haase and his teammate Max Hofer from the Montaplast by Land-Motorsport team. Elia Erhart in another Audi R8 LMS from EFP Car Collection by TECE had already secured the Trophy win early, ahead of his Audi brand colleagues Filip Salaquarda from ISR Racing and Rolf Ineichen. Dennis Marschall from Rutronik Racing finished the season as third best of 19 drivers in the junior classification.

Title success and five trophies in one weekend: The third and final round of the GTC Race series ended with a series of successes at Hockenheim for Audi’s customer teams. Audi Sport driver Markus Winkelhock won the Goodyear 60 endurance race in the Audi R8 LMS of the Space Drive Racing team. He then finished second in the first sprint and won the second sprint. After a total of four victories this season, the 40-year-old pro driver won the GTC Race pro standings. It was already the third title for Audi in this club racing sprint race series after 2016 and 2017. Privateer Vincent Kolb, who competed for Phoenix Racing in another Audi R8 LMS, completed the race results with two third places in the two sprints.

Second place in Italy: At the finale of the Campionato Italiano Gran Turismo Endurance, Audi Sport Italia was narrowly defeated in the title fight after a harsh penalty. Audi Sport driver Mattia Drudi as well as Riccardo Agostini and Daniel Mancinelli shared the cockpit of the Audi R8 LMS at the fourth round of the racing series at Monza. Drudi crossed the finish line first ahead of the Ferrari driver trio Antonio Fuoco/Alessio Rovera/Giorgio Roda, but the Audi Sport driver received a five-second penalty for a slight body contact with a competitor. With a gap of only 2.879 seconds, the Audi driver trio thus achieved second place in the race. This means Agostini and Mancinelli are runners-up in the championship. They had contested all races together, while Mattia Drudi had to skip one race due to a scheduling conflict and finished fourth in the standings. Without the penalty in Monza, the title would have gone to Agostini and Mancinelli. The sprint classification of the race series is led by Agostini with 25 points ahead of the final round on December 6.

Two trophies in the national comparison: Traditionally, the participants of the South Island Endurance Series and the North Island Endurance Series in New Zealand compete once a year in a national competition, the New Zealand Endurance Championship. This year, four Audi R8 LMS cars competed at the Highlands circuit. In the three-hour race, Neil Foster/Jonny Reid in the Audi of Team IMS finished second ahead of their three brand colleagues. Third place went to Scott O’Donnell/Liam Lawson from Track Tec Racing.

Double victory in US club racing: Two proven Audi R8 LMS ultra cars set the pace in the sixth round of the Trans Am in the XGT class. Jason Daskalos won the GT classification at the Austin circuit in Texas, one lap ahead of Ken Thwaits.

Preparing for 2021: In the DTM, an era is coming to an end. Race cars such as the current championship-winning car, the Audi RS 5 DTM from René Rast, will no longer be permitted next year. Instead, GT3 sports cars will compete in the popular German racing series in the future. As a foretaste of the 2021 season, various models completed demonstration laps at the DTM finale at Hockenheim. Audi Sport driver Markus Winkelhock represented the colors of the four rings in the Audi R8 LMS in the green hell livery.

Catching up successfully: Lucas Mauron completed the debut season of the DTM Trophy in the Audi R8 LMS GT4 as runner-up in the Junior class. The Swiss driver with Brazilian roots managed a strong catch-up race on the last two race weekends with the Hella Pagid racing one team. At the finale in Hockenheim, the 22-year-old repeated what he had already achieved three weeks earlier in Zolder: he secured first place on the grid for both races. He won the first sprint at Hockenheim with a half-second lead over the new champion Tim Heinemann. In the second race Mauron finished third. With a total of three wins and a third place in the course of the last two events, Mauron improved from fifth to second place in the junior classification and from eleventh to fifth place overall in the new racing series.

Title at the Nürburgring: After the cancellation of the two final rounds of the Nürburgring Langstrecken-Serie, the Giti Tire Motorsport by WS Racing team has been crowned champions of the SP8 class. The Dane Henrik Bollerslev and the German Niklas Kry won the classification in the Audi R8 LMS GT4 with a five-point lead over their teammate Carrie Schreiner, who had to miss a race due to a clash of dates.

Class success at Hockenheim: Team Car Collection Motorsport achieved a class win at the final of the GTC Race racing series. In the first of two 30-minute sprints, Finn Gehrsitz in the Audi R8 LMS GT4 of the Walluf-based team won by 6.9 seconds.

Good end of the season: Team T3-HRT-Motorsport finished the ADAC GT4 Germany season in Oschersleben with the third podium result of the year. William Tregurtha/Hugo Sasse in the Audi R8 LMS GT4 started the race on Sunday in ninth place. In the course of 39 race laps they improved to third place in the field of 18 entrants.

Third place in South Africa: At the third round of the G & H Transport Extreme Supercars Series in South Africa, Marius Jackson in the Audi R8 LMS GT4 achieved a podium result. The businessman from South Africa crossed the finish line in third place in Class C at the second sprint on the Zwartkops circuit. In the sum of the scores from both sprints, which is common in this racing series, Jackson was third best of seven competitors in his class.

Podium in Texas: Team N29 Technologies LLC achieved a podium finish in the Trans Am West Coast Championship. At the third round of the series in Austin, Texas, Natalie Decker in the Audi R8 LMS GT4 finished second in the group of participants from this regional championship in the west.