Comments after the race at the Nürburgring 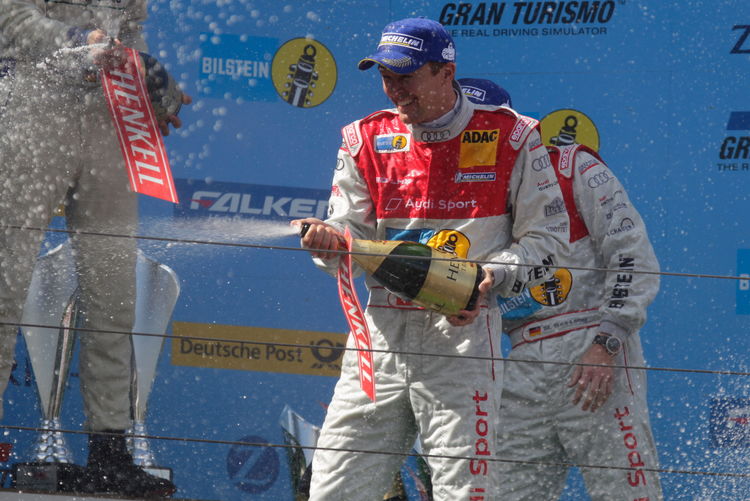 The dream of overall victory in the 24-hour race at the Nürburgring was not fulfilled for Audi. The R8 LMS remains, however, unbeaten in the GT3 class. The comments after the race.

Dr. Wolfgang Ullrich (Head of Audi Motorsport): “Our four Audi R8 LMS ran perfectly from the technical point of view and we also had very good performance in our class. Unfortunately two of our cars were struck by accidents. Even so, repairing the cars took a lot of time. We were always close to a podium finish, we fought to the bitter end and actually finally achieved this in the final 45 minutes. It was a fantastic team performance and advert for the reliability of the R8 LMS. We have three cars in the top five and all four cars raced without any technical problems worth mentioning.”

Marc Basseng (Bilstein Audi R8 LMS #14)
“I’m very happy that Marcel Fässler, Frank Stippler and I rigorously implemented our program. We planned to survive the opening stages and the night without problems or collisions. We managed this. In the morning we then had a car with which we could really attack. All three of us drove excellent double stints. This was one of the reasons why we were able to move forward little by little and ultimately took third place at the end.”

Marcel Fässler (Bilstein Audi R8 LMS #14)
“Two incredible weekends in the space of two weeks now lie behind us. On the one side the 24 Hours of Le Mans and on the other the 24-hour race here around the Nürburgring-Nordschleife. They were both very emotional moments. I gave absolutely everything during each of my double stints this weekend. We were only a little more circumspect when running during the night. It was great fun to drive this car. The podium result is just reward for everybody who worked in the background to provide us with top equipment.”

Frank Stippler (Bilstein Audi R8 LMS #14)
“That was hard work! The pace was extremely fast and the competition very strong. I think there were 20 cars from many different manufacturers on the grid which were capable of winning. I think third place this year should be judged very highly. Last year we would have annoyed about this. However, this learning curve was a necessity to make the next step for the following year.”

Christopher Haase (Audi Sport performance cars R8 LMS #15)
“One of the greatest races that I have ever contested in my life. It was in fact a 24-hour long sprint race and very interesting because of this. You can’t afford to make a mistake and must nevertheless extract the maximum. This is exciting, but is also a lot of fun. We started 18th and finished fourth. On top of this we were second in class. Audi Sport Team Phoenix did a first class job. We did everything right which is why we can be more than just satisfied.”

Marc Hennerici (Audi Sport performance cars R8 LMS #15)
“The start of the race was quite difficult for me. I couldn’t feel the rain tires well enough on in the drying conditions, which is why I lost some time. However, the guys from Audi Sport Team Phoenix worked perfectly and made incredible pit stops. Audi showed that it had prepared exceptionally well for this race. The car ran smoothly from the technical point of view. All the cars made it through to the finish. When all is said and done we can be satisfied: we are the best GT3 team, third overall. It’s a little disappointing however that we gave our all but were without a chance in the fight for overall victory. We want to attack again, but under new circumstances.”

Markus Winkelhock (Audi Sport performance cars R8 LMS #15)
“After last year a podium finish was my goal again this year. But it was a turbulent race in which we had difficulty with oversteer in our R8. For this reason we must acknowledge that our sister car was quicker and overtook us. Otherwise we also had a trouble-free race, and made it through without incident. We can be satisfied with fourth place as a result.”

Mattias Ekström (E-POSTBRIEF Audi R8 LMS #16)
“We had a really good rhythm at the start of the race and I was convinced that we would fight for overall victory this weekend. But then several small incidents – technical and with competitors on the track – threw us off course. We lost touch and never really got back within striking distance. Fifth place overall and third in class is scant consolation as we came here to win.”

Timo Scheider (E-POSTBRIEF Audi R8 LMS #16)
“Everything started well, but then came the collision during the night, which was annoying, but it’s exactly this that makes the 24-hour race what it is. As a result of hard work and a great discipline we fought our way up to fifth place again. We can be pleased with this and it’s at least just reward for the hard work done by the guys in the pits. We’ll not give up and hopefully get another chance to be at the very front here once again.”

Marco Werner (E-POSTBRIEF Audi R8 LMS #16)
“The pace was good and it was fun to fight for second place overall at times on Sunday morning. Unfortunately I had an accident. I smashed into a Mercedes when three cars appeared in front of us which were more or less at a standstill on the track. I’m really sorry for the guys. Third overall would have been much better. Now we can be pleased with the smaller things like third in class …”

Christian Abt (PlayStation Audi R8 LMS #17)
“I’m very disappointed. It’s still my great dream to win this race once for Audi and now things didn’t work again. The weekend was still a lot of fun. Congratulations to my team mates Luca (Ludwig) and Christer (Jöns) for such a strong performance and especially Christopher (Mies) for recording the fastest race lap for an Audi R8 LMS. The three guys were really chomping at the bit; they never let their shoulders drop and made a fantastic impression. I hope we can compete again with this line-up.”

Christer Jöns (PlayStation Audi R8 LMS #17)
“Apart from our two small incidents everything was positive and the race was really great fun. The car was an absolute dream. We found a good pace. It’s a shame that we dropped down at the beginning because of such a small thing. The Phoenix squad nevertheless claimed a podium for Audi.”

Luca Ludwig (PlayStation Audi R8 LMS #17)
“The result is certainly not what we had hoped for. Twelfth place is really a little disappointing. But we lost two laps at the start due to a small relay problem. During the night I unfortunately slid off the track in the wet as I was on my first lap on slicks. It cost us several laps. I’m really very sorry for the entire team which had worked fantastically. It just shouldn’t have happened. I hope that we get another chance.”

Christopher Mies (PlayStation Audi R8 LMS #17)
“Obviously I’m not at all satisfied with twelfth place, particularly as we were the fastest car in the field for much of the time which or second fastest race lap also shows. When you think that we started twice from the back due to our technical problem at the start and the collision later on, then this is at least a little consoling. That was hard work and shows were could have finished.”

Hans-Jürgen Abt (Team Boss Audi Sport Team Abt Sportsline): “We came here with the goal of winning the race – which is why the result is a little disappointing for us. The minor defect to start and the contact which both cars suffered during the night robbed us of any chance we had. However, our team worked hard to force its way to the front again. We can be extremely satisfied with the team performance. That all four cars reached the finish shows the reliability of the R8. But as Team Boss I would have liked to mount the top step of the podium.”

Ernst Moser (Team Boss Audi Sport Team Phoenix): “It was exactly as expected: whoever makes the fewest mistakes wins this race – and this was Olaf Manthey’s team. Congratulations. Each of the four Audi R8 LMS had its own hard luck story. All the cars made the finish, which should never be taken for granted on the Nordschleife. However, the little difficulties cost any chance of victory this year because the competition was just too strong. When all is said and done we are pleased with class victory and the third step on the podium.”