Skip to content
We are using cookies for a better user experience.
10/05/20
Neuburg a. d. Donau
Sport 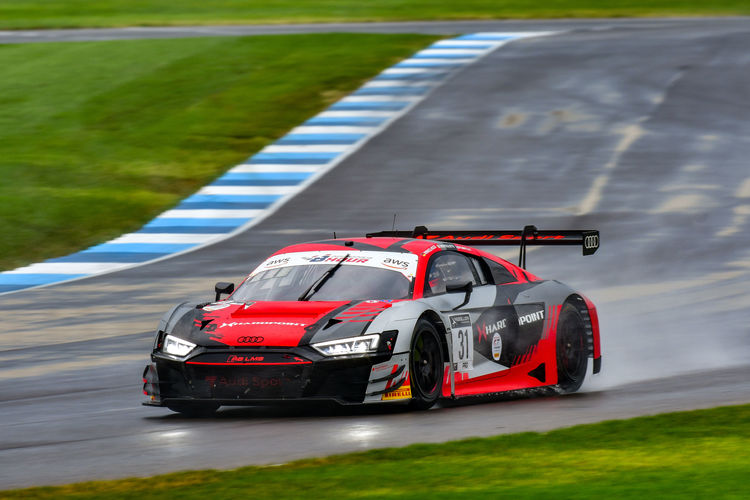 At the second round of the Intercontinental GT Challenge, Audi Sport Team Hardpoint WRT with the Audi R8 LMS fought its way back up to fourth place after early setbacks. Rain showers of varying intensity turned the Indianapolis 8 Hour race in the US state of Indiana into an unpredictable lottery in the first phase.

From ninth place on the grid, Markus Winkelhock had a good start. In difficult conditions in the rain, the Audi Sport driver was among the top three as early as the first hour of the race and set a new best lap time on both the 49th and 50th laps of the race. When his American teammate Spencer Pumpelly took over the cockpit, the weather conditions made it impossible for him to get into a rhythm. With alternating stronger and less intense showers, the American was unlucky in his choice of tires. A total of three punctures threw the number 31 car back to ninth place and put it three laps down. Thereafter, Markus Winkelhock climbed back to fifth place in the Audi R8 LMS. Mirko Bortolotti finally continued the chase with strong lap times and finished fourth despite a drive-through penalty. “Already in qualifying we saw that we were behind the lap times of the competition, and in addition we had three punctures in the race,” said Chris Reinke, Head of Audi Sport customer racing. “Nevertheless, our new Belgian-American team combination and our three drivers never let themselves be irritated, proved their good sporting spirit and fought their way back to the front – they deserve our respect.”

In the GT4 category of the race, another Audi R8 LMS was at the start. The long-standing Audi customer team GMG Racing tackled the event with team owner and driver James Sofronas and his teammates Elias Sabo and Andy Lee. The driver trio had led the fiercely competitive class, which was characterized by many leadership changes, at five different points in the race and finally finished sixth.

The next big endurance race for Audi Sport customer racing is the third round of the Intercontinental GT Challenge in Belgium. The Audi R8 LMS has already won the Spa 24 Hours four times and is ready for the classic, which will be held this year from October 22 to 25.