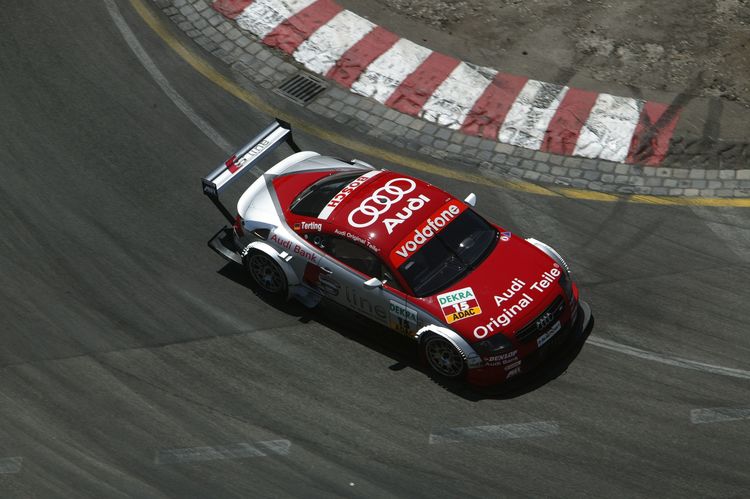 In front of the dream backdrop of 128,000 spectators, Audi Junior Peter Terting achieved the best ever result of his still young DTM career at the Norisring in Nürnberg. Peter Terting, the youngest DTM driver of all time, crossed the finish line in 12th position immediately behind his team colleague Karl Wendlinger. “For a newcomer, the Norisring is everything but easy, that’s why I’m really delighted with this result,” mentioned Terting after the 72-lap marathon around the street course neighbouring the Dutzendteich. “The car was great. I looked after the brakes at the beginning, and was therefore able to work my way slowly but surely towards the front. I overtook several cars and was able to follow Karl Wendlinger at the end. It was a fantastic feeling.“

The DTM’s only street race developed, as expected, into a battle against the heat with cockpit temperatures exceeding 60 degrees Celsius. The Audi Juniors were well prepared for probably the hardest race of the year thanks to an intensive fitness-training programme. “I put a home trainer in the sauna, and cycle for almost one hour in 60 degrees, so that I can get used to breathing in hot air,” revealed Terting. “The race was hard, but I had no problems.”


Whilst Terting celebrated his successful DTM debut at the Norisring, the “home race” for his team colleague in the S line Audi Junior Team, Martin Tomczyk, ran anything smoothly. “I don’t think I’ll ever like the Norisring, even if I win here one day,” said Tomczyk, who, as 11th in Saturday’s qualifying, narrowly missed qualifying for the single lap qualifying run (“Super Pole”). The 21-year old stalled the engine of his Abt-Audi TT-R at the start. “I was a little irritated as the light changed because several drivers jumped the start,” said Tomczyk. The bonnet of his TT-R came loose after a collision in the first corner, which resulted in a long unscheduled pit stop. Tomczyk spun exiting the S-curve a few laps before the chequered flag, and was forced to retire. Nevertheless he was classified in 18th position at the finish.

Mattias Ekström, who was the quickest Audi driver in qualifying and held a promising third place during the initial stages of the race, was dogged by bad luck. The Swede had to pull off in his Abt-Audi TT-R during the 18th lap, due to a faulty steering servo oil line. “There was so much smoke in the cockpit, I could hardly see where I was going,” explained Ekström.

Both Laurent Aiello and Christian Abt finished in points scoring positions. While Aiello, who temporarily held fourth place, complained of deteriorating grip and was overtaken by the Mercedes drivers Bernd Schneider and Jean Alesi, Christian Abt shone during an impressive fight back, which brought him from tenth to seventh position at the flag. “I’m satisfied with the result,” said Team Director Hans-Jürgen Abt. “We are simply on the limit at quick circuits with the possibilities available to us. That’s why I’m happy that we scored points with two cars.”