Audi with strong performance at the Norisring 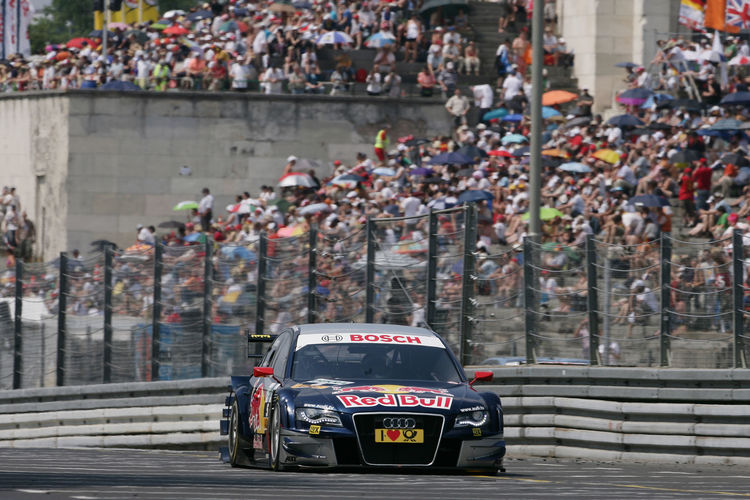 Audi showed a strong performance at its “home round” in the DTM: in front of 132,000 spectators (throughout the weekend) at the Norisring Mattias Ekström pushed forward from grid position five to second place and in the end missed victory by merely 0.591 seconds. With five Audi A4 DTM cars in the points Audi achieved its best Norisring showing of all since 2005.

Mattias Ekström’s race was particularly impressive. The Swede initially pushed past the leader of the standings, Bruno Spengler, with consistently fast lap times. Ekström then managed to make up almost five seconds which he had lost in the early phase behind Spengler. Shortly before the end of the race the Audi driver closed the gap to race leader Jamie Green. The Swede, however, had no chance any more to overtake the Mercedes of the Briton on the final laps. “Jamie simply didn’t make the slightest mistake,” commented Ekström. “My car was perfect today. Of course it’s a shame that I wasn’t able to bring home the victory which the Audi fans and the team had been hoping for because we were competitive enough today. But there will be tracks at which we’ll strike back.”

The current-generation Audi A4 DTM cars were more than on a par with the Mercedes C-Class that has been unbeatable so far at the Norisring. Oliver Jarvis managed to improve his qualifying result by two positions and title defender Timo Scheider even by five in the race. Martin Tomczyk, as well, shone with a recovery after having dropped to 13th place at the start. With an eighth-place finish the driver from Rosenheim still scored one point, which meant that Audi Sport Team Abt Sportsline finished in the points with all four current-specification cars.

“In view of the grid positions we squeezed the maximum out of the situation,” said Head of Audi Motorsport Dr. Wolfgang Ullrich after the race. “We had a really good vehicle performance, great pit stops and a perfect strategy. With Mattias (Ekström), we at least clinched second place and made up two points in the championship. More important, though, is the fact that we’re back and that everyone saw how strong we are – even at the Norisring.”

With Alexandre Prémat in seventh place Audi Sport Team Phoenix clinched two points as well. The Frenchman was the only Audi driver to have started into the race with an aerodynamics version trimmed for low downforce.

Mike Rockenfeller and Katherine Legge occupied positions twelve and 16. Miguel Molina and Markus Winkelhock retired after collisions and contacts with the wall.

The DTM will be continued on August 8 at the Nürburgring where Audi celebrated a commanding one-two-three-four win last year. Mattias Ekström as the best Audi driver is ranking eleven points behind the leader of standings, Bruno Spengler, in third place.